Connection Haunted throws you right into the game without any tutorials or instructions. It’s up to you to wander and explore the deserted, PlayStation-era first-person shooter game. You are thrown right into the lobby of this game where you will choose which server to join. Once you pick a room, you will find there is no one around, you will be playing the loneliest round of capture the flag. Even though it looks like you are playing an online multiplayer game, this game does not have any multiplayer. It’s just you on your own, no tag teaming up with a friend to capture the other teams flags. This really does feel like a legit ‘90s FPS, they did a really good job capturing the feel of online retro first person shooters. This game declares that it is “a thrilling psychological horror game stylised to look like an empty server of a classic online first-person shooter.” All you have in your inventory are 15 glow sticks, and the handgun you pick up in the first room. There is no one to shoot with the gun, but better take it just in case. The game is quite chill and just filled with exploration until you find and capture the first flag, that’s when all the crazy stuff begins to happen. Once you score some points, the monsters become aware of your presence and start coming out of the shadows and hunting you. Luckily for us, they aren’t really good at being stealthy; their loud groans give them away every time. If a monster does happen to sneak up on you be sure to have your pistol ready, apparently our character is a great shot because one hit and the monster is down. I'm warning you now, if you do get hit, you will be booted off of the server and you will have to start all over again from the beginning. At the beginning of Connection Haunted, the pacing is incredibly slow and it is very hard to figure out where you are supposed to go and what you have to do. I wandered around for almost an hour and I was just going around in circles. I also found the game insanely dark, I had to crank up the brightness and turn down the contrast to see much at all. I’m sure it was meant to be super dark like this, but man I was getting frustrated. At least with adjusting those settings I was able to figure out what I was looking at. Plus, why isn't there a way to interact with maps and other items you see sitting around in the level? It feels like they were just there to tease you. The graphics definitely looked like the '90s era of games they were trying to emulate. After you figure out what is going on and how to progress, Connection Haunted won't take you very long to beat at all, probably half an hour to an hour. That is if the monsters don't kill you and make you start over. There are multiple different endings to get all depending on things like how many flags you get, if you listen to the suggestions the mysterious player 2 gives you, and how many dolls you are able to find and destroy. I have to say, once I beat it once, I didn't really want to start over again and wander around. 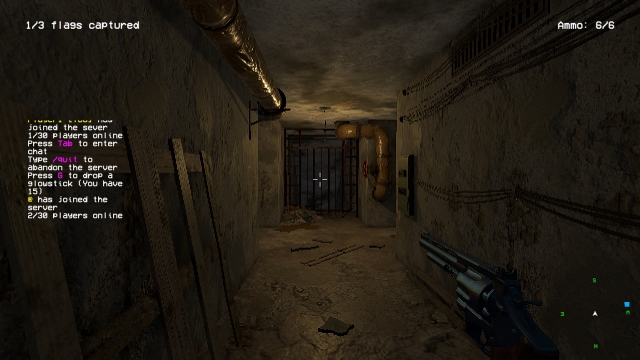 Connection Haunted really has some creepy things going for it, especially when player 2 shows up, it feels like someone is always watching you. The real misstep here is the lack of instruction and direction, that causes you to feel lost and confused. It's really too bad because they did a great job recreating the look and feel of online FPS games like Quake. If you like games that make you feel creeped out and unsettled, this might be a game to check out, but, if you like games that give you clear direction on what to do and where to go this is a title you will want to avoid.

A game that has the potential to be really cool, but a lack of direction and incredibly short game really make this a frustrating play.