This is a weird one for me because I never played the original Crash Team Racing on the PlayStation, so I’m not going into this with the nostalgia that most people who were thrilled for this seem to have. That being said, Crash Team Racing Nitro-Fueled (CTR: Nitro-Fueled) surprised me because I had a lot more fun with this game than I expected too. It’s no Mario Kart 8, but it’s still a very solid kart racer with a surprising amount of content, beautiful visuals and a lot of different modes to play around with.

Aesthetically, Crash Team Racing Nitro-Fueled looks fantastic on the PS4 Pro and a 4K TV. Although it only runs at 30fps and 1440p, every area and its tracks are so bright, vibrant and full of colour/life and with the motion blur that’s implemented, it has this cinematic appearance that looks awesome when using items or when items are being used around you. The majority of the 30-plus tracks play great and all look excellent, from the environment surrounding them to the objects that sometimes intentionally disrupt the race. Whenever I wasn’t focused on winning, I was always admiring the visuals. The characters and their karts also look great and I think it's awesome that they have different skins including an old model from the original game. The only issue I have is the 30fps and 1440p. I think a 60fps 1080p lock would have been better. Reason being, I think the 60fps is why Mario Kart 8 feels as good as it does and – while this game is still fun – I think it could have definitely benefited from it. 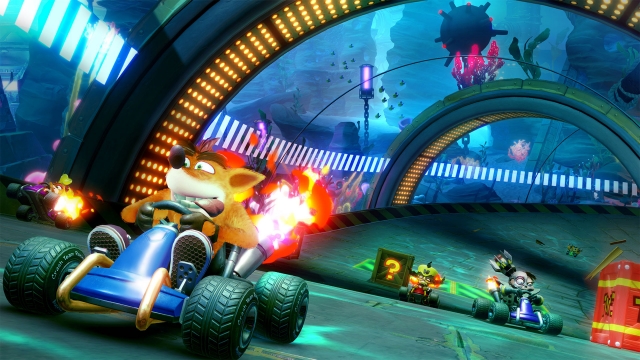 As soon as I started my first race in Nitro-Fueled, I immediately knew that I had to change the controls because the default ones were cramping my hand after only one race. So, I changed it to the alternative control scheme which swaps the inputs for accelerating and jump/drift and the game felt much better. CTR: Nitro-Fueled is all about its nitro mechanic and if you don’t master it quickly, you’re probably going to lose a lot. I had issues with it in the beginning few races because I was treating it like Mario Kart 8, and while I think that knowledge helped me learn it quicker, winning became considerably easier once I understood how it worked and I started to have a lot more fun with it.

It’s similar to Mario Kart’s, but instead of gaining a higher boost the more you drift, you have to hit the drift button whenever the smoke from your kart goes black or whenever the meter in the lower right corner gets full to earn your nitro boost. The closer you are to the sweet spot the better boost you get. You can gain three boosts from one drift until you have to hop out of the drift into another one to get another three boosts, which is kind of weird at first because it's awkward to control, but I got used to it pretty quickly. I actually like that it gives you something to do other than race and throw items.

I’m not a huge fan of the items in CTR: Nitro-Fueled mainly because there isn’t a tonne that can help you when you have fallen behind, which meant I was restarting races whenever I fell off the map or was bombarded with items to put me in last place. There are Wumpa Fruits you can collect on every track and – similar to Mario Kart 8’s coins – if you collect 10 they increase your speed, but in CTR: Nitro-Fueled, collecting 10 fruits can also enhance your items, which I never really noticed unless it was the TNT box turning into a Nitro one. I also felt that the CPU players in adventure mode were always faster than me regardless of how many times I hit a perfect boost drift or if I had 10 Wumpa Fruit, it could have been that my difficulty was at medium, but I never felt like I had the advantage. 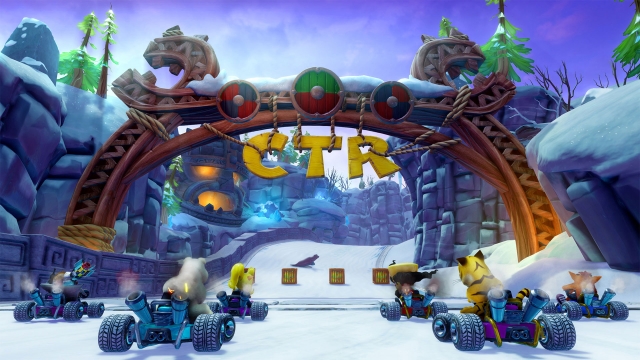 The mode I played the most so far is Adventure Mode, which is the main single-player story, even though it isn’t much a story. CTR: Nitro-Fueled’s adventure mode begins with a visit to planet Earth from an alien named Nitros Oxide who challenges the residents of Earth – aka Crash and the Team – to a game called “Survival of the Fastest”. If Nitros Oxide wins, he will enslave the people of Earth, but if he loses, he swears to leave Earth alone. Once he issues this challenge everyone begins to work on their karts and then the races begin. The world and races are divided into sections and each new section is unlocked by defeating the boss and collecting the key to open the door. Each track is locked by how many trophies you have, and to gain trophies you have to come first in each track, which makes it a very linear experience instead of doing whichever track you want in each section. Once you collect all the trophies in a section, the boss race will be unlocked that usually includes a gimmick – for lack of a better word – such as the boss constantly throwing bombs or dropping TNT, which offers a new challenge each time (regardless of how frustrating it can get). Once completed, you unlock the boss as a playable character.

The way Adventure Mode is laid out is great. Because of how the tracks are unlocked, you can feel the races getting more difficult as you progress. The bosses essentially stayed the same throughout which was disappointing. They all threw something behind them as mentioned previously, but if you get in front of them it’s an easy win as long as you maintain that lead. After out-racing each boss, the races in that section will be available for CTR Challenges and Relic Races along with a Crystal Challenge being unlocked. The CTR Challenge is doing the race over again, but this time you are on the hunt for the letters C, T, and R that are well placed along the track while coming first as well. Relic Races are solo races and are similar to a time trial, where you have to finish the race by a certain time, but you can pause the time by hitting the boxes labeled with 1, 2 and 3 representing the seconds which time will be paused for. Lastly, Crystal Challenge is not a race, it is in an open-ish boxed area and you have to collect all the crystals before time runs out, which was my least favourite part of this mode.

All these challenges are available for local play as well, along with an actual time trial, battle modes, single races and cup races which can all be played 4-player local co-op, which works surprisingly well with no framerate problems. Online also works great with no noticeable lag or framerate issues in the 20-ish matches I played with the option to play single races or battle mode with a voting system for tracks. Everything you play in CTR: Nitro-Fueled gives you coins (playing online gives you the most from my experience) that you can use to purchase characters, skins for characters or cosmetic items for your kart, which can also be unlocked by playing the game.

Crash Team Racing: Nitro-Fueled is a great kart racer, even if we have been spoiled by Mario Kart 8. It looks fantastic, the majority of the tracks are great and local/online modes work better than I would have thought. Once I changed the controls to something more comfortable, I had a blast playing through the well-crafted adventure mode and all the tracks and challenges that reside in it, even if the CPU players had the rubber band effect.

Once I changed the controls to something more comfortable, I had a blast playing through the well-crafted adventure mode and all the tracks and challenges that reside in it, even if the CPU players had the rubber band effect.

Crash Team Racing Vs. Team Sonic Racing – Who is the best Kart Racer of 2019

I also didn't play it way back when (more because I didn't want to play a knock-off Mario Kart and had no great love of Crash). However, I am glad that it appears to live up to the hype. 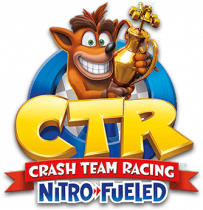