The Cruis’n series has been associated with Nintendo since Midway released the original Cruis’n USA into arcades back in 1994, surrounded by rumour and innuendo that it was powered by Ultra 64 hardware, the original platform codename for Nintendo’s fancy upcoming Nintendo 64 doohickey. 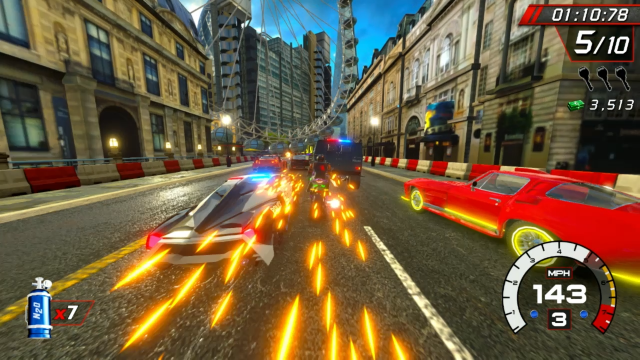 Ultimately this wasn’t quite true but it cemented its place in history along with the rest of the series. The eventual Nintendo 64 trilogy was perhaps a little unfairly maligned as they were still fun quirky racers even if they didn’t quite match their arcade cousins. After a short detour to the Game Boy Advance with Cruis’n Velocity and the Wii with Cruis’n, a de-licensed port of Raw Thrills’ Fast and the Furious arcade game; it seems fitting to see the series make a comeback 10 years later by the same developers.

As it happens, Raw Thrills is headed up by Eugene Jarvis, who was also involved with the creation of the series in the first place when he was at Midway (as well as some of the most influential games in history like Robotron 2084 and Defender) so there are lots of loops being closed here. They licensed the Cruis’n brand from Nintendo and released Cruis’n Blast into arcades in 2017 so it’s only natural that any port would make its way to the Nintendo Switch. The game is a wonderful throwback to over-the-top arcade racing. If you long for the fast, frantic action of Hydro Thunder or the San Francisco Rush games, then Cruis’n Blast has you covered. Hurtling down slightly ridiculous courses, lots of boosting and hitting ramps and being squeezed out of a finishing place by evil computer opponents is the order of the day here.

The arcade release had five tracks; Death Valley, Madagascar, London, Rio de Janeiro and Singapore which have all been replicated here. This home port also includes a tour mode which adds a further 24 tracks, some based on these locales and some entirely new, split into six cups of four races. Each of the tours is themed in some way, whether that be driving through a storm, surviving an alien invasion or dodging dinosaurs. 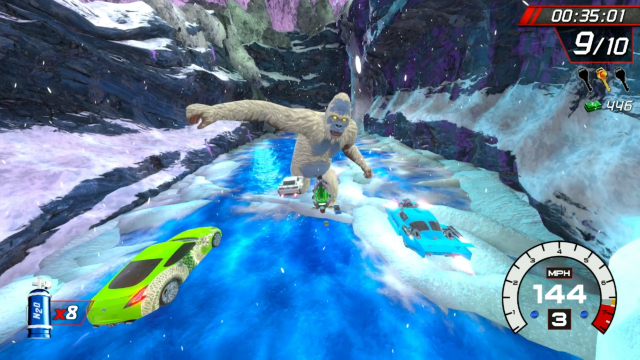 Every track has some kind of spectacle event, the London Eye for example becomes an active threat as it leaves it’s base and rolls around the course. There are many more, including some extremely ludicrous, over-the-top but fun events that I wouldn’t want to spoil because they often caused me to have a great big smile on my face. These events push the high-octane races into something else entirely with on-screen carnage always happening. The speed and spectacle help stop the tracks getting old because the racing is so fast-paced that nothing outstays its welcome.

Visually the game is extremely bright and eye-catching with arresting use of neon colours everywhere. It definitely draws you in and the fantastical nature of the courses, featuring mythical creatures like phoenixes and yeti make for interesting dressing to what, at first glance, sound like relatively normal real world locations. The game also runs really well in both portable and docked mode, it aims for 60 frames per second and pretty much hits that with the occasional hiccup. There is generally so much happening that you probably won’t even notice when it occurs. 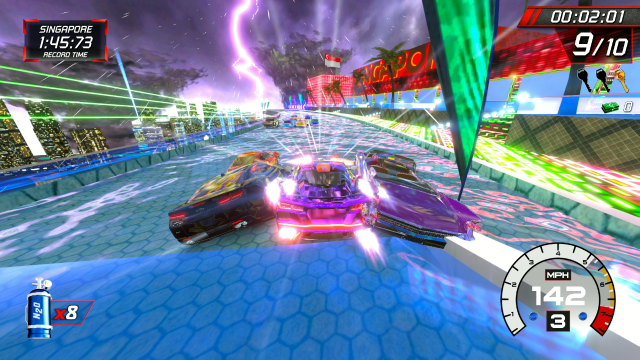 Cruis’n Blast comprises Classic Arcade which allows you to take on the original arcade tracks, Cruis’n Tour opens up the various race series with four difficulties, a Time Trial mode and the option of a Single Race on any of the tracks you’ve unlocked. On the multiplayer side there is the option for playing locally with up to four players but sadly no online multiplayer.

Each set of tracks unlocks as you get gold in the earlier series, as well as the tracks themselves, completing each series of tracks can also reward you with new cars. New cars can also be unlocked by finding the three golden keys hidden throughout every track. These can be sneakily hidden away and add to the game's replayability.

Fortunately the game controls really well, there is a heavy focus on boosting (hence the game’s title, the Blast there being the games name for its turbo mechanic). It has both a purchasable (with in-game currency) Blast item and a drift mechanic similar to the later Mario Kart titles where you see smoke from your tires that changes colour to indicate the boost level when you end the drift.

Cruis’n Blast is a great return for the series and a thoroughly entertaining time. The lack of online multiplayer and the relative shortness of the tracks are the only negatives really. If you are after an old school arcade racing fix that’ll take a while to unlock everything, you can’t really go wrong with Cruis’n Blast.

Cruis’n Blast is an excellent return for the series and genre as a whole. The lack of online multiplayer hurts but there is a lot to enjoy for solo players and those who can play locally. Fantastic visuals and track set-pieces make this an engaging, fun time.

Oh, so it's Cruis’n Blast as in Cruis’n USA! Seems obvious now, but I didn't make the connection...