A couple of months ago, I wrote about all the things that I saw in the Cuphead in The Delicious Last Course trailer that I was excited to try. I have now been able to sit down with this DLC and try it all out for myself to see if it lives up to the hype around it and if it was worth the wait. As soon as you start the game, you will notice that there is a new theme song to go along with the new title screen that shows Cuphead, Mugman, and Ms. Chalice together. The song is once again incredibly catchy and feels just like an old barbershop tune. 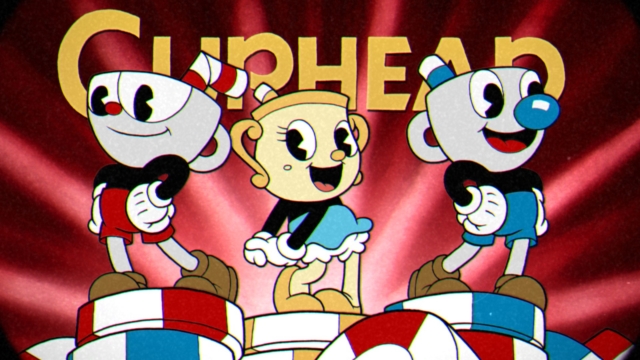 The setting for the DLC is Isle IV, a set of four isles that are part of the larger Inkwell Island from the main game. To get to this new destination, you have to jump into a rowboat to get taken over. This new island is beautiful with its watercolour look, little village to explore, mountains, and a forest; it fits seamlessly with the worlds from the base game. Once you get into the levels, you are treated to bosses with crazy personas and the same classic animation style that we know and love. The new levels that you find in the Delicious Last Course DLC aren’t just boss battles: there is a variety ranging from run and gun levels, stages where you have to parry to defeat all the pink-coloured enemies, ones where you hop into a plane and take to the skies to defeat a boss, and others where you are in the sky but you are on a floating platform instead of a fighter plane. The vast variety helps the DLC feel fresh and not stale as it would if you were always playing the exact same type of levels. At any point in time, if you want to rechallenge any of the levels from the base game, all you need to do is hop in the boat and select which of the isles you want to travel to. 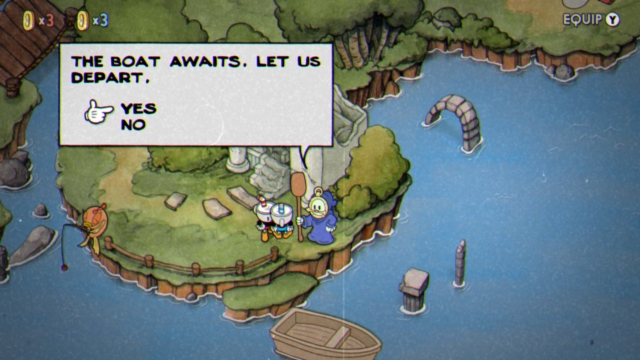 As you explore the island, you will see that Porkrinds Emporium is back once again to sell you power-ups and weapons for your characters — though some are definitely more useful than others, so choose wisely! Chef Saltbaker is a new character that we have not seen before; this chipper and jolly chef is the one responsible for creating the cookies that allow Ms. Chalice to switch places from the astral plane with either Cuphead or Mugman. Be sure to visit him frequently, as he will give you power-ups to aid you along the way. Chef Saltbaker has also come up with a recipe for a baked good called a Wondertart; this tart will allow for control over the astral plane so you can bring Ms. Chalice back to life permanently — no more swapping places between the characters. The thing is you will have to find all the ingredients he needs to bake up this tart, so that will require you to battle the bosses who are guarding them around the map. The catch is that you will have to defeat the enemy on Regular mode, and if you are playing on the easier Simple difficulty, you won’t get the required ingredients. 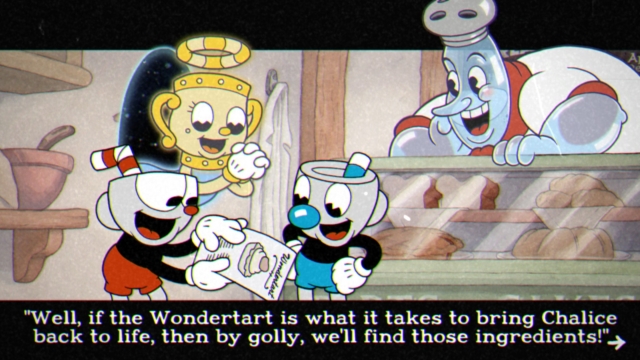 In the past, when you would play cooperatively with another person, it would be tricky to keep track of which character you were — especially since Cuphead and Mugman look very similar except for their colours — but now when one person is Ms. Chalice it was a lot easier to keep them straight. I know at my house it was a fight over who got to play as the new character, so when I finally got to try her out once I was playing by myself, I got to see how her new moves worked and how they compared to playing as one of the two original characters. 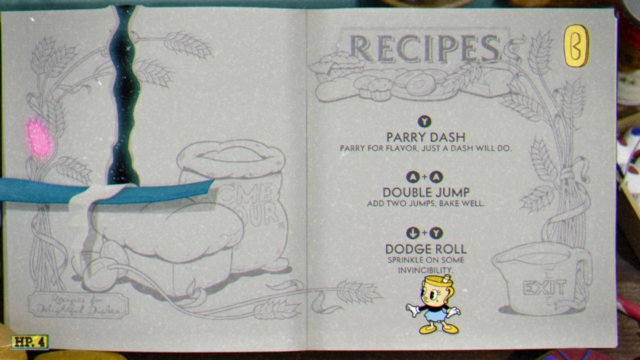 First off, I love the ability to double jump; the extra jump really makes evading enemy attacks so much easier, especially later when you have to avoid bosses rolling at you, the extra jump really helps! The other main difference with controlling Ms. Chalice is that she has a dash parry attack that she can do along the ground; you don’t need to jump as you do with the other two, though I did find that I was trying to parry the old way that I was used to, so it may take a bit of practice to get used to this. When she fires, she shoots three shots at a time, which is really useful when you have a bunch of smaller enemies coming at you, allowing you to hit the boss multiple times causing more damage. After I got some coins and was finally able to buy items from Porkrind’s Emporium, I found that one of my favourites is the Chaser. It’s a long-range weapon that does below-average damage, but you don’t have to aim as all the shots will automatically hit the enemies; this weapon lets you focus on avoiding the incoming attacks and the smaller enemies coming at you. Even with awesome weapons like these, Cuphead is still an incredibly challenging game! For people who find it quite difficult, it would be nice to be able to get the ingredients for the tart on the easier mode, as I feel if players have to play the harder difficulty and do not do well, they will get discouraged and give up. 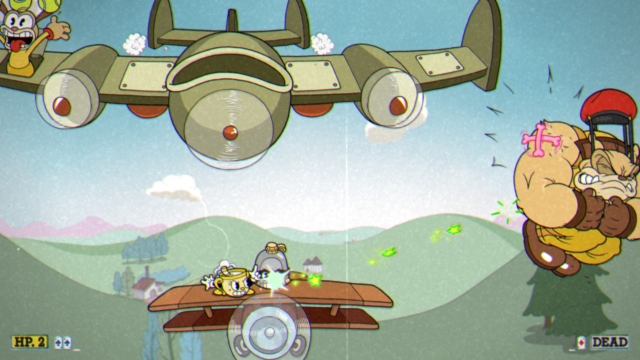 Everything I loved about the original game is here, and being able to play as Ms. Chalice along with Cuphead and Mugman is great. The classic look and music are so charming it’s hard not to love the feel of this game instantly, especially if you love things like the old Mickey Mouse or Felix the Cat cartoons. The wait for The Delicious Last Course was a long one but it was definitely worth it; the fact that it seamlessly combines with the base game and allows you to play the original levels with a new character was a welcome surprise. Using the abilities of Ms. Chalice definitely helped me defeat bosses that I had previously found difficult in the original game. The only thing I would want to change is being able to complete the elements of the story quest in Simple Mode and not be required to beat everything on Regular. For some people — and younger players — Regular mode is a bit too frustrating or challenging to get through. Cuphead in The Delicious Last Course is something I feel Cuphead lovers definitely have to check out. It is so fun and a treat for the eyes with those beautiful visuals and a great soundtrack; it has to be experienced. Just don’t forget to equip the Astral Cookie in the charm menu if you want to switch to Ms. Chalice!

Cuphead in The Delicious Last Course is a must-play for people who enjoyed the original game. If you found Cuphead too challenging, then chances are you will still find it pretty hard even with the inclusion of Ms. Chalice and her special abilities.

Why I'm Excited for Ms. Chalice in Cuphead - The Delicious Last Course