Where do I even start with a game like Cuphead? Between the fantastic art, lovely soundtrack, tight gameplay, ruthless bosses, varied weapons, strong characterisation, tons of replayability, and especially high levels of attention to detail, I just don’t know which topic to tackle first. I guess I’ll just start at the beginning.

As soon as the title screen loads up, players are greeted by a song and dance starring our heroes swaying along to a quartet telling the story that is about to unfold. Even this early into playing, it becomes clear that Studio MDHR has made it their mission to truly capture the feel of a 1930s cartoon. Various art techniques are used to age everything and clever technical features make the entire experience feel as if it were on a much older device. At this point, the more curious gamer will likely search through the Options menu and be rewarded for their trouble with the Controls section with a full list of actions and how they’re performed. I would highly suggest changing Shoot from the X button to the right trigger since it frees up the thumb to use the other three face buttons. 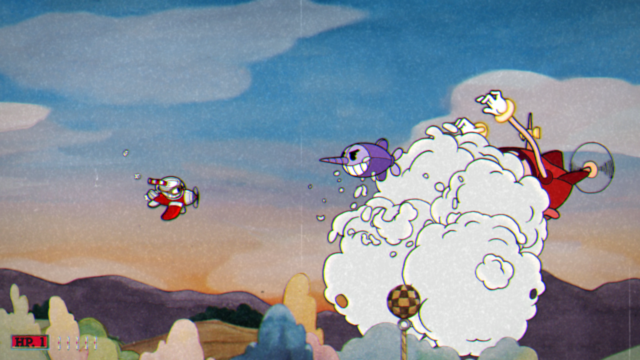 The main reason I suggest doing this now is because once the controls of the game are in your head, it becomes imperative to begin strengthening that muscle memory to improve your reaction time. Although I’m getting a bit ahead of myself, because before you play at all, you will be shown a book that fills you in on the antics of Cuphead and Mugman. Turns out these two ended up in the Devil’s Casino where Cuphead, blinded by greed, lost a bet that would cost them their souls if they did not do what the Devil told them to. This entire section is endearing and well-implemented. Our heroes are given some humanity in the form of a bet with the Devil himself that is clearly a bad idea. While Cuphead is reactionary and takes the bet without thinking, Mugman tries to warn him of the dangers, albeit all too late. From start to finish, the ordeal is shown through terrific still frames that manage to evoke nostalgia and childlike wonder simply by capturing the art style and music so well.

Taking control of Cuphead, the player can now run through a succinct and simple tutorial that gives the player just enough information to be able to start taking out baddies. Depending on your personal level of explorative ingenuity, your first steps on the world map can go quite a few different ways. For example, you could talk to Mac, who has a starting gift for you that might prompt you to visit Porkrind’s Emporium, so that you can look at the other weapons and charms you’ve got available at the start. You could even start the game with a different shot type if you completed the tutorial and talked to Mac. There’s also two Run & Gun stages and three separate boss fights you can reach in whatever order you like. 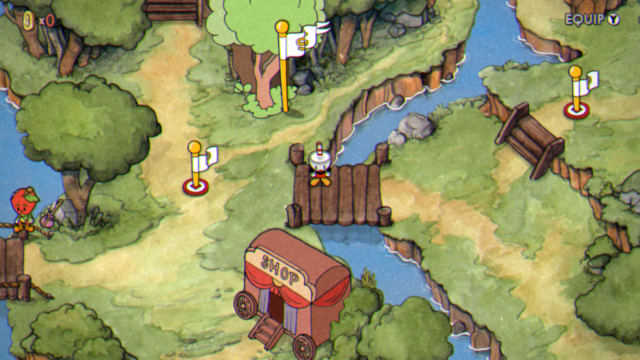 To be fair, some of this is only available right now if you find the shortcut that’s poorly hidden in the northern section of the map. This shortcut also allows you to talk to an axe I named Chip due to the chip in his blade and because he didn’t tell me his name. Near Chip is also a hidden coin to help the player buy even more goodies once they’ve collected a few more. My point is that the player is given several options the moment they have control on the map. I love this because it allowed me to try the stages I wanted to first and come back to those that I wasn’t interested in yet or was having trouble with. Being able to take on both the Run & Gun stages early on was also a huge help as I ended up having 15 gold pieces on me before I even attempted a boss. This was, of course, after I reran the levels a few times to not only collect all the gold, but improve my rank, which is a common reason I frequently replay levels. My gold quickly translated into the Smoke Bomb charm, the Spread Shot, and, my favourite, the Roundabout Shot.

Using my new powers, I easily dispatched two bosses before becoming fairly stuck on the other three. To avoid spoilers, I won’t say anything specific about any one boss, but I will explain what I love and hate about them in general. My favourite thing about the bosses is how each one fights completely differently. Each fight is unique and requires the player to put the time in to understand how to beat that particular boss. The downside to this is when the player has difficulty figuring out what tactic to use because it seems as if there’s simply no way to win. I had this happen with a particular boss because I had not understood how the extra enemies of the fight were being spawned. This led to several deaths by offscreen forces and these losses were always the most infuriating. 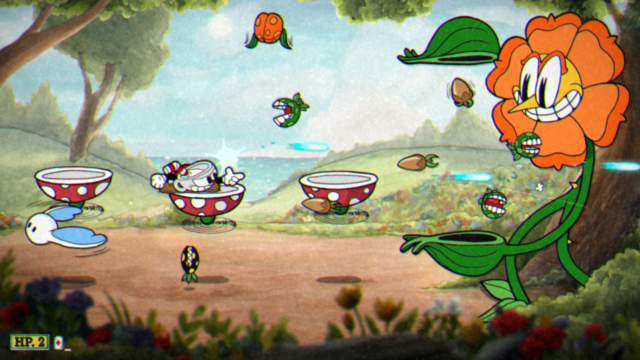 Also of note is the numerous stages each boss goes through. Some have only a few while others have many, but no matter what, all will need to be memorised in order to succeed. This multi-stage system works really well with nearly all the fights, but there are a few that I felt either became unfun or downright unfair at times due to how the boss would change. For example, I didn’t find the boss fight that uses multiple mini-bosses very fun because I never felt like I was fighting the real boss until I defeated the three mini-bosses, which were also randomised. This made it feel like a slog to the actual challenge and that is just unfortunate.

But then there’s the unfair points like when the boss already has a hazard taking up the lowest third of the screen at times and the boss changes stages only to take up nearly all of the middle third of the screen with no way to get to the top. While this didn’t happen with many different bosses, it would happen a lot on the bosses that it could happen on. Since I decided to get an A rank on every boss as I played through, it took me a bit longer to see all the bosses, but I have fought them all and can say that they are all different and challenging in their own way. 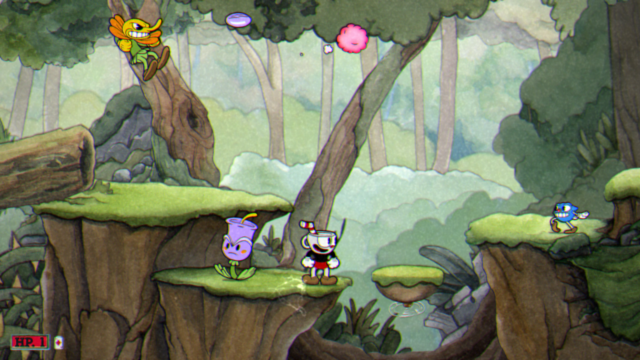 Truly, the only other issue I’ve had with this title was the occasional load screen that overstayed its welcome, but this only bothered me because I assume Cuphead can’t be that taxing on the console. Although I could be wrong and just be so enamored by everything about the game that I can’t bare to be away from it for more than a few minutes at a time. My intention was to wrap this up by talking about how much attention to detail has been put into the title, but I remembered that I hadn’t mentioned the whole experience can be played in local co-op with Player Two controlling Mugman. This revelation also reminded me to mention that there is an Expert mode available after completing the game and there is even a secret P Rank challenge for the truly brave (I’ve got four done so far!).

I can’t speak enough praise about Cuphead, but I do think it’s fair to mention that sometimes the game can be a little too unforgiving in enemy attack patterns and their ability to hit from offscreen without much warning. I highly suggest grabbing this gem as soon as you can because all of the bosses will be ruined for those that don’t act fast. Get out there and beat some bosses!

Cuphead (Reviewed on Xbox One)

Although I speak very highly of Cuphead, I do think the game can be a little too unforgiving in enemy attack patterns and their ability to hit from offscreen without much warning. Regardless, the game’s tight controls, fun boss fights, and pleasing aesthetic make it a must have.

I am totally addicted to this, even though it keeps kicking my arse. It's like domestic violence but with cute jazz music in the background.

I want to frame this description and put it over my game collection. Maybe I'll get it made up like one of those "No Place Like Home" things. Too good.