Day of Infamy is a smack in the face to the modern shooter. An old-school tactical FPS from New World Interactive - the developers of Insurgency - it does away with cluttered HUDs, gadgets, skill trees and perks to give the player an unadulterated experience of combat. Fans of similar realism-based shooters like Wolfenstein: Enemy Territory and Red Orchestra will feel right at home here, yet Day of Infamy also brings some refreshing extras to the table.

Set in WWII, the game utilises a number of locations from across the conflict for its range of maps. Players will find themselves battling it out across Sicily, Normandy, Bastogne and many more. Alongside the maps are a set of game modes centred on point capture and objective destruction. Map design is fairly linear, with a few flanking routes here and there, but for the most part forces two teams to run into each other head on.

Teams are split between the Wehrmacht on one side and the Allied forces on the other. Disappointment is waiting for those wanting to play the Red Army - they’re currently not supported. Players can customise their solider based on a number of authentic uniforms from either side, unlocked by ranking up in the game. Day of Infamy offers a robust selection of classes: Officer, Radioman, Rifleman, Machine Gunner, Support, Engineer, Assault, Flamethrower and Sharpshooter. Some, like the Officer, Radioman, Sharpshooter and Machine Gunner, can only be selected by one or two of your team. The move is a positive one, and ensures that your teammates don't all select the sniper class and hang back all game. 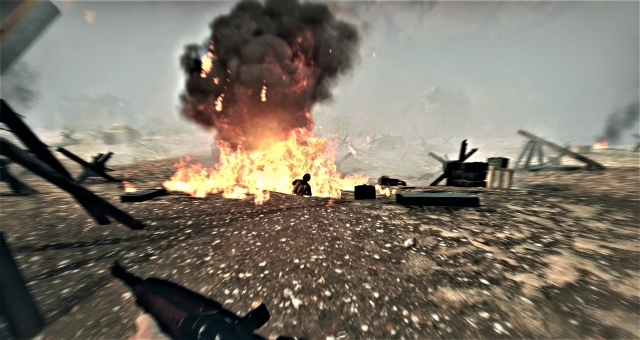 Teams spawn in waves that can be triggered by a countdown or by a member of their side running back to a regroup point. Players are encouraged to stick next to Officers and Radiomen, who can call down powerful artillery strikes as well as support items, health and ammo. Officers, for their part, are guided towards helping their team at all times. If there’s one problem with the class system it’s that the wrong player in the wrong class can often hamstring a team, especially when they’re in a crucial role.

When battle does commence in Day of Infamy it’s a shock to the system. Like many realistic FPS games out there, you’ll often die from one well-placed shot. This means that oftentimes the player will be dropped without even seeing their assailant. The game encourages careful teamplay, and players who rush into the open or love to sprint everywhere are easy pickings for veterans able to conceal themselves properly. Gunplay is obviously inspired by Insurgency: accuracy when firing from the hip is near-impossible, forcing players to take careful aim down sights and pick their shots.

While the gunplay is commendable it’s in the sound department where Day of Infamy really shines. The game is unashamedly loud. I haven’t felt this blown away by a FPS’ sound effects since I played the first Call of Duty way back in 2003. Soldiers shout, scream and spout voice lines sporadically. Guns rattle, bark and cough in their realistic timbres. Explosions tear through your senses and force you to cower from their power. The battlefield in Day of Infamy is confusing, disorienting, debilitating and thoroughly glorious. The experience is further amplified when playing with headphones: directional sound like footsteps and rifle reports will see you twisting through the maps to find an enemy you were sure you heard flanking your team. In its absence the din of battle is a mechanic in itself, ramping up tension with the promise of violence to come. 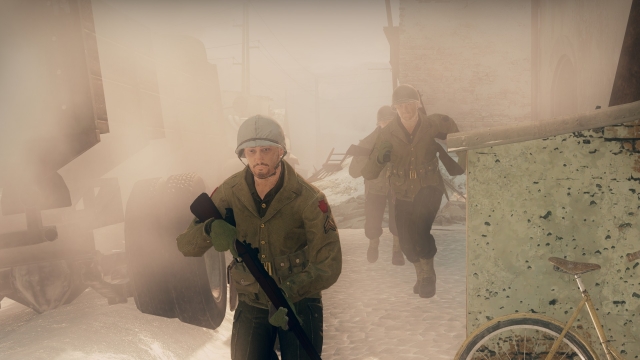 Unfortunately the game does disappoint slightly when it comes to the graphics. While not inherently bad, the visuals are fairly outdated. Built on the Source engine, the game doesn’t look all that much more impressive than Day of Defeat, which came out more than 11 years ago. Some textures are rough, some unusually smooth. Water in particular suffers, though luckily it's present in small amounts throughout. Particle effects are fairly well done, especially when it comes to the palls of smoke that tend to blanket the battlefield. The jets of fire from the flamethrower are particularly impressive, and when they fill a bunker your team is occupying it certainly has a terrifying effect.

At the time of writing, Day of Infamy has added some new ranking features, as well as unlockables, into the game. Prior to this the game had some problems with player retention, especially new players. Unlocking the different uniforms for each force will also unlock a different voice for the character. This is especially prevalent on the Commonwealth side, where your team can be populated by Australians, Welsh, Scots and Indians to name a few. It adds a lot to the already impressive atmosphere.

Day of Infamy is not a game that will tear down the hegemony of Battlefield or Call of Duty, but like other realistic shooter out there, it provides an alternative FPS experience. While slightly disappointing in the looks department, the game more than makes up for it elsewhere. Exciting, team-orientated and exceptional when it comes to sound effects and atmosphere, Day of Infamy is a title that fans of genre should definitely check out.

Day of Infamy (Reviewed on Windows)

Day of Infamy is not a game that will tear down the hegemony of Battlefield or Call of Duty, but like other realistic shooter out there, it provides an alternative FPS experience.