Those with automatonophobia should look away now, because Death by Game Show realises one of your worst nightmares. This colourful 2D tower defence game depicts a 26th century in which robots have overcome mankind and become their overlords. The robots are keen to keep their human slaves as docile and possible and have enacted a form of selection by which those who question authority are sent for ‘rehabilitation’. That rehabilitation turns out to be participation in a deadly game show in which the robot audience eagerly awaits your death.

Your avatar is blasted onto a circular death-planet through which the only method of escape is to survive against hordes of robot enemies until a rescue ship arrives. In order to do so you are given a robot-dispensary companion, who can spawn friendly bots at will when clicked on the UI. The game present a variety of allies and enemies, which unlock as you proceed through the various missions. The missions lack variety somewhat - perhaps sometimes you’ll be asked to kill a certain amount of enemies, reach a points total or destroy buildings but at the end of the day the player is unlikely to notice what their task is as there seems to be only one rule: kill everything in your way. 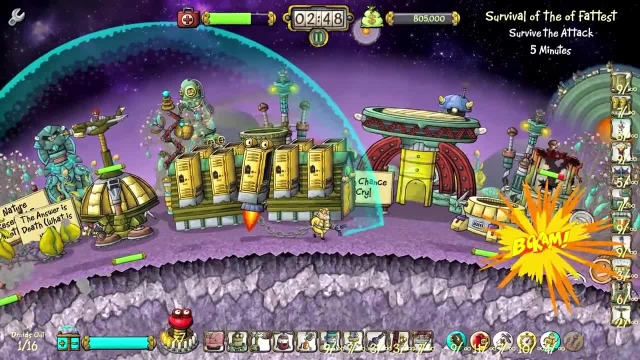 Not wanting to be a tower defence game without towers, Death by Game Show also allows the player to construct buildings to keep them alive - from machine-gun posts to AI-spouting defence mainframes. Placing these buildings can often be frustrating, however - the game’s action, coupled with a similarity in colour and tone between your buildings and the backgrounds - can result in misplaced or badly positioned tower.

Enemies can come in a variety of forms, from small armadillo-esque units that push your avatar inevitably towards his doom on the perimeter electric fences of each zone to airborne kamikaze units that have a disarmingly cute smiling face not unlike the :D emoticon. Each can be countered with your own robots, but your dispensary can only support a certain number of units at a time before it collapses in a puff of smoke. It can be revived by collecting the coins dropped by enemies (which also serve as an in-game currency and high-score).

Though Death by Game Show starts out at quite a leisurely pace, the game ramps up the action quite quickly after the ninth or tenth level, often leaving the player frantically spawning friendly robots and running around the map avoiding the swinging swords of enemy automatons. Traversing the world is made slightly harder by the lack of a jump button, meaning that you cannot simply leap over enemies as they attack you. Instead the player is furnished with a grappling hook that they can use on certain areas of the map. 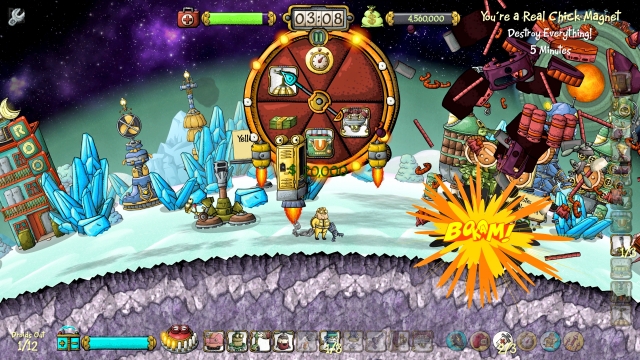 Death by Game Show packs itself full of tongue-in-cheek humour and niche references, often in the form of signs and logos plastered in the background of levels.The humour can be a bit hit and miss but the writer’s heart is certainly in the right place and it never really falls completely flat. Visually the character design is distinct but, as mentioned previously, the game can get so cluttered by objects it becomes rather sore to the eye. Friendly robots will spout huge dialogue boxes when spawned, explosions will dot the screen and faux blood will splatter the screen when you’re hit. Occasionally you’ll be given the chance to spin a giant game wheel which will also push its way into the clutter to take up more room.

Death by Game Show has a distinctive style that allows it to stand above a lot of entrants to the tower defence genre but falls flat on the execution of its vision. A lack of variety and a bit of polish on the mechanics leaves the game feeling less like a release and more like a well-made flash game you might find online. With a difficulty rating that shoots sky-high in relatively little time, this is a game that only the hardest of hardcore players will complete and enjoy to its full potential.

A lack of variety and a bit of polish on the mechanics leaves the game feeling less like a release and more like a well-made flash game you might find online. With a difficulty rating that shoots sky-high in relatively little time, this is a game that only the hardest of hardcore players will complete and enjoy to its full potential.