Destruction AllStars is the new PlayStation 5 exclusive that aims to fill in the prolonged gap of a new Twisted Metal game, but with a complete 180 on how it’s presented. Twisted Metal was dark and grim, but Destruction AllStars is bright, colourful and much more family-friendly. Unfortunately, there isn’t much depth or content behind all the lights and pretty colours though. There are four main multiplayer modes to choose from along with an arcade mode which is just custom games with bots, a challenge mode with time trials and other similar challenges. The first mode, Mayhem, is a free-for-all mode where you have to crash, wreck and annihilate every car in sight to score the most points to win. Gridfall is another free-for-all mode that is significantly more challenging because while you still have to crash, wreck and annihilate, you also have to worry about the platforms gradually falling beneath you - and you only have one life, so when you’re out, you’re out. Carnado is the first 8v8 team-based mode where you have to collect gears from crashing into enemies and then drive them into the massive tornado in the middle to bank points for the team; but if you lose your car, you lose the gears as well. Lastly, Stockpile is the second 8v8 team-based mode where you have to wreck enemy cars so they drop gears which you then collect on foot and take to the control points to capture the point, similar to a domination game in Call of Duty.

Each game mode has three basic car types you can hop into at the very beginning: a heavy-hitting vehicle, a faster and more agile class, and an all-rounder type. There isn’t much of a choice in which one you get, you essentially just jump into the closest one possible and rock with that. Driving itself feels pretty good for the most part with some decent sense of speed and control from each of the vehicle types, but it’s the crashing mechanic that doesn’t feel skillful which is a huge problem for a game centered around car-based combat. With no way to control the camera while driving, the right thumbstick is instead used for crashing into other cars with left and right side-sweeping in the respective directions and pressing/holding forward acting as nitrous as you go full force towards your target. While getting a wreck can still feel satisfying, trying to get that wreck can be an enormous pain because it’s absurdly difficult to line up a decent crash and missing is always frustrating. Both the side-sweeping and the nitrous have a noticeable cooldown which adds to the annoyance of missing your target. 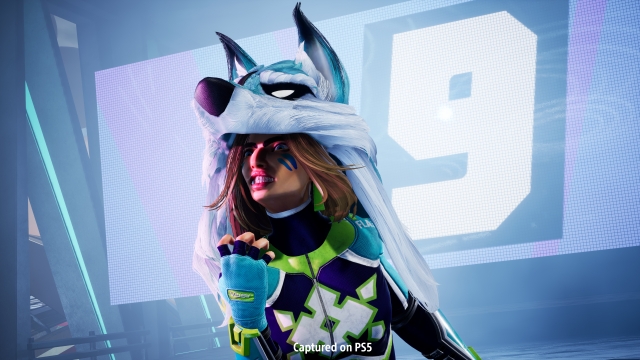 Mayhem is by far the best mode because it is exactly as the name describes it and can be thrilling ramming into a huge pile-up of cars or getting decimated by someone else doing the same. Gridfall can be fun at times as well, but it will cause too much frustration to play consistently as you can die in seconds and have to go through all the loading screens again just to hop back in and die again. In either/both team-based modes, locating the enemy team can be difficult, as I found myself constantly driving aimlessly looking for them. That being said, Carnado is definitely the best out of the two because it offers some fun risk/reward mechanics. All the game modes can be played solo, but only Carnado and Stockpile can be played with a pre-made party. It’s understandable because it’s free-for-all and players would team-up, but it makes it quite limited when you do want to play with friends.

Something that is not limited though is the number of characters you’re able to play from the very beginning. With a total of 16 characters, there is quite a large cast of heroes to choose from in Destruction AllStars that show off some great diversity which is always nice to see. Each hero has their own vehicle, abilities and even a remixed version of the main song to fit their personality - it really shows off this game's abundance of style. Since this is a strictly multiplayer game, there isn’t a story to get invested in so you don’t see much of these characters, which is a shame because they seem to have a lot of personality even from the very little you get to see. 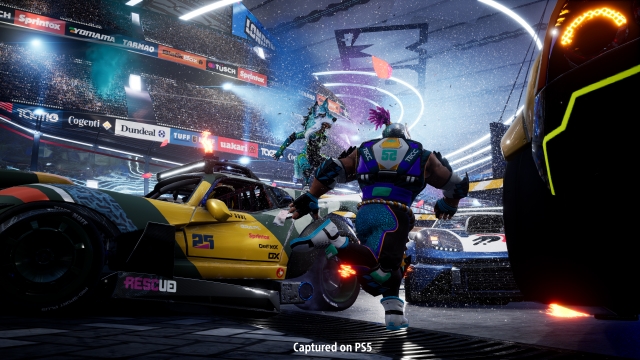 When you are on-foot playing as your hero of choice, it feels just as good as driving, but there isn’t much you can do. You have a few parkour manoeuvres to help you navigate the arena more fluidly, but the main thing you’ll be doing with those is collecting gems scattered around the arena to get your hero vehicle and abilities (also known in-game as Breakers) quicker. There are a wide array of Breakers ranging from invisibility to speed boosts with fire-trails that will likely match your playstyle, it’s all about trying everyone out and seeing who fits.

This goes for hero vehicles as well which can be called once the ability bar is full. Vehicles also have a Breaker that essentially acts as an ultimate and is unique to each hero as well, but some feel more overpowered than others. Bluefang’s Shredder Breaker will bring up huge saw blades in front of his vehicle that basically one hits you even if it’s a light tap, but a counter to that would be Genesis and her Rocket Breaker to get away swiftly. While on foot, you can also steal or wreck enemy vehicles by jumping on top and entering the correct button-prompts before they can shake you off. When it works it can be an entertaining mechanic, but players usually shake you off before you can do much of anything.

A huge issue with Destruction AllStars is the lack of incentive to play. Playing matches rewards you with experience which will level your profile earning AllStar Coins (known as AC in-game) each level to spend on cosmetic items to customize your profile or favourite hero, but that’s about it. There is nothing else you can do with these coins nor is there anything else you can unlock or progress towards. If you are in desperate need for these cosmetics but don’t want to spend the time levelling, you can also purchase in-game currency with real money to speed up the process. Visually, Destruction AllStars is quite honestly striking to look at with its bright and colourful arenas, heroes and general appearance. It doesn’t run at a native 4K as it can drop down lower to maintain that smooth 60 FPS, but it still looks fantastic regardless. While the arenas look superb as well, they don’t really differentiate themselves from one another enough to recognize a specific one. As mentioned previously, the best thing Destruction AllStars does is have the different remixed versions of the main music for each character, it’s a little touch that goes a long way. This game is oozing with a unique style that feels like a complete flip from what Twisted Metal was doing, but it works well.

Destruction AllStars can be an enjoyable Twisted Metal-like experience for those nostalgic for that, but once you feel the frustration of the crashing mechanic and realize there isn’t much to work towards, you’ll probably turn around and use that nitrous in the opposite direction.

Destruction AllStars Is Getting Bots To Address Low Player Numbers 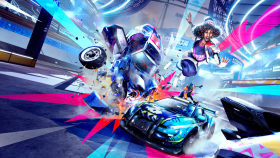