Having been exposed to the isolation of an augmented man living in Prague and seen the horrible conditions of the aug ghetto, I thought that I was totally prepared to experience serving a bit in an Arizona prison. Well, have you ever seen Prison Break? It’s not even as nice as that, and the guards are lawfully allowed to shoot you dead right outside your cell. 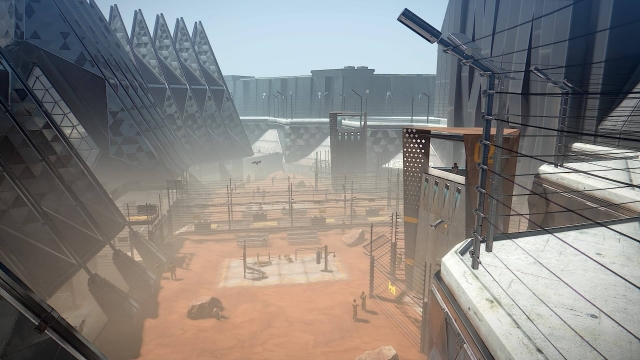 It's Arizona, were you expecting a jungle?

It’s into this facility that Derrick Walthers, the pseudonym which Adam Jensen is undercover with, arrives via helicopter. The story of Deus Ex Mankind Divided: Criminal Past takes place through a tale that Adam is telling Dr Auzenne (TF-29’s psychiatrist), about one of his first missions for Task Force 29. Since it takes place after the main game, spoilers are probable.

The mission was to go undercover at the Pent House super-max penitentiary, and get in touch with a super-deep cover operative. The first thing they did upon arrival was upload a virus to take out “Walther’s” augmentations. Due to the excessive amount of augments he has, it keeps causing his systems to glitch and cause pain. The pain is known by the inmates as The Choke, and used to punish minor transgressions, or if an inmate even thinks about using their augmentations. It must be a smart virus, as people’s legs and arms still work as intended.

The first thing I noticed in Criminal Past, and had to address before I had even taken control of Adam, was that the music is incredibly loud. I had to pause and turn it down to almost half volume, so that I didn’t need the subtitles on to know what people were saying. I do like the subtitles on, but I also like to hear the actor performances. With what little skin he has left, is there any point in the hat?

Needless to say, as the story progresses a riot breaks out across the two cell blocks. What do you expect when the people who are already treated like second class citizens outside, are massively mistreated on the inside? Not to mention that Warden Stenger is definitely on the ‘corrupt’ spectrum…

If your modus operandi for the rest of Deus Ex: Mankind Divided was more ‘Cyborg Killing Machine’ and less ‘Sneakier Than A Cat Burgling Ghost’, then you will likely find Criminal Past quite difficult. Although you do come across weapons, the amount of ammunition is limited, and depending on your choices throughout you might not even have your augmentations.

Yes, it is possible to get use of your augmentations, but it’s through an optional quest so easily missed -- and you might even miss the optional quest later which can also unlock them. There are quite a few optional quests, in fact, that can make things easier for you and alter what Adam and Auzenne discuss via voiceover. Some of them you come across and need specific augments unlocked to take advantage of -- for instance I had multiple opportunities where the Icarus Landing System would have been great, but instead I had to take another route or skip it completely. People might complain that, whereas the main game allowed many different ways to approach almost every mission, this is much more binary. It’s well written and fun to play, and I can understand why there are fewer options given the setting and mission. You do have the option to sneak through ventilation ducts everywhere, or shoot your way through areas (so long as you have the ammo), and given the number of side quests there’s plenty of scope for replaying if only to hear the different dialogue from Jensen and his therapist.

Overall, Criminal Past was a very enjoyable end to Mankind Divided. The only two drawbacks I found were the very loud volume, and Dr Auzenne pisses me off. Whenever you die, which happened often to me because my sneaking skills are awful, she says one of three things. I know I didn’t really die, I don’t need you to tell me six times an hour, woman! 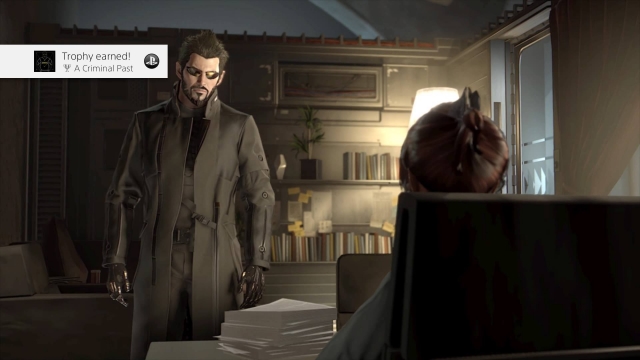 Criminal Past is a great finale for Mankind Divided, and only makes the desire for more Deus Ex stronger. The ending is pretty open, and with faces new and old it does a great job of giving us something different while being faithful to the franchise.

Deus Ex: Mankind Divided - A Criminal Past (Reviewed on PlayStation 4)

Criminal Past is a great finale for Mankind Divided, and only makes the desire for more Deus Ex stronger. The ending is pretty open, and with faces new and old it does a great job of giving us something different while being faithful to the franchise.

This just reminds me that I need to get Mankind Divided at some point. I am super backlogged!

Just finished on this dlc for the first time. Had a blast. I agree with your review. It definitely makes "the desire for more Deus Ex stronger." Also I liked your image caption "Shut up, doc! If I say I fell to my death, THEN I FELL TO MY DEATH!"; I also happened to fall to my demise while playing and Dr. Delara Auzenne didn't believe Jensen.

Anyways, good review. Hopefully Deus Ex will return in the near future :)

Thanks for the comment, glad you enjoyed it - and that you enjoyed the DLC! Hard to believe that it's been 4 years and still no word on a new Deus Ex...