When Deus Ex: The Fall was first announced, people were pissed. Expecting a next-gen sequel, people got an iOS game. I had my own reservations. Not because it wasn’t a ‘proper game’, but because developer, N-Fusion, don’t exactly have a proven track record with this sort of game.

Running parallel to events of Human Revolution, this spin-off puts you in the tight trousers of Ben Saxon - ex SAS, current monotone English mercenary dude. Ben is much less interesting than Adam Jensen and the supporting cast are a smorgasbord of bland, including returning characters. Ben doesn’t even have a nice jacket like Adam.

Although the jacket isn’t, the world itself is beautifully recreated, with the deep blacks and rich golds of Deus Ex’s future renaissance. The architecture and backdrops are gorgeous to look at, with even the lighting model impressing, as shafts of gold light penetrate through blinds evoking fond memories of Adam’s apartment. There were a few times when I just stopped and stared, my brain racing at the prospect of future games on the relatively new gaming platform. I say future games because we’re not quite there yet. Memory issues let the game down visually. Character models are aggressively reused, with most of them looking like PlayStation 2 rejects - rubbery and horrifying. The main problem though, isn’t aesthetic - it’s mechanical. Virtual thumbsticks just don’t work properly. You can get around by using them - and you do get used to them - but they’re not very accurate. Add to that the fact that your thumbs obscure your peripheral vision when you’re moving and it’s not ideal.

Shooting is also a clumsy affair, in both execution and delivery. There’s no feedback at all when ripping into an enemy with bullets - the gun just lets out an unsatisfying rattle and the enemy falls down. You can aim either freely, or lock on, but locking on can be just as fiddly as trying to tease the crosshair onto the head of your foe. 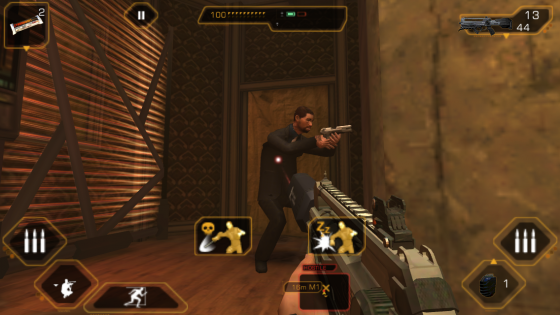 The clumsiness of the gunfights means that sneaking is the only viable option. Of course, this is the way Deus Ex games are meant to be played, but the AI of the enemies makes the stealth just as underwhelming. They will totally lose sight of you, even if you’re crouched right in front of them, casually strolling past you before you punch them upside the head with your robo arm.

The lack of verticality - and the lack of a jump button - make the stealth a simple case of skipping between waist-high objects, punching/killing people and eating battery-replenishing granola bars so you can do it all again.

I’m a big fan of the Deus Ex franchise, and all the disparate systems are present in this spin-off: present, but not correct.

You can upgrade your augmentations - and your arsenal - on the fly, but none of the upgrades are very interesting, with most of them watered down versions of Human Revolution’s. There are open hub areas and multiple choice dialogue options, but the story and characters just aren’t very interesting. The game has potential, but - unfortunately - its ambition isn’t matched by its execution. It’s worth grabbing just to see how close iOS devices are to realising traditional first-person games. Just don’t expect it to be as polished as its current-gen cousin.

The mobile platform has masses of potential but, until some sort of gamepad is manufactured, these types of games just don’t work properly on the device. Currently, iOS games seem to work better when they are just that - games tailor-made for the device. Not games trying to replicate the controls of a different platform entirely.

When Deus Ex: The Fall was first announced, people were pissed. Expecting a next-gen sequel, people got an iOS game. I had my own reservations. Not because it wasn’t a ‘proper game’, but because developer, N-Fusion, don’t exactly have a proven track record with this sort of game.