After selecting ability points, I was provided with a selection of skills based on those ability areas. Although some skills are pretty straight-forward, such as Logic and Endurance, I discovered some more ambiguously titled ones, such as Inland Empire and Half Light, so it’s well worth reading the overviews of each one. The game then threw me into darkness, with the words “BEGIN” ominously hanging on the screen, waiting to strap me into the ride that is Disco Elysium. My Ancient Reptilian Brain started a spiel of awareness. The various parts of my psyché introduced themselves slowly as I explored the diverging routes of thought. Though they seemed alien at first, I soon found myself welcoming their intrusivity, as they weaved in and out of most of my interactions in Disco Elysium. 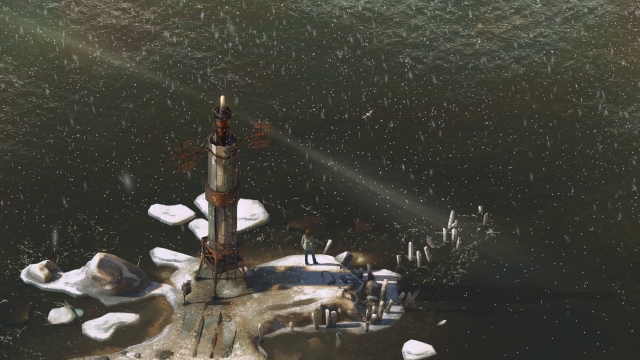 There I was, expecting some isometric L.A. Noire type business, but instead met with an immediate boss battle with my character’s trickling self-doubt and delusion. It gripped me from the first moment the text appeared on my screen, and I heard that grizzled voice beckoning my character into consciousness. In a game full of highlights, the writing might be the strongest feature, and combined with the fantastic voice acting, it truly brings to life the depths of the character’s mind, as well as the diverse cast you’ll discover around Revachol.

Revachol as a locale is in itself a main character in Disco Elysium. Whilst exploring the ups and downs of the post-Soviet inspired state with your stoic and ever-patient partner, Kim Kitsuragi, you’ll learn the tortured history of the city, and by extension, the complicated political climate that surrounds it. From the volunteer police force closely tied to the capitalist Coalition, to the Loyalist faction that stems from fascism, it’s clear that the team at ZA/UM set out to make a deeply interactive commentary, one in which you’re free to explore and interpret the different ideologies. 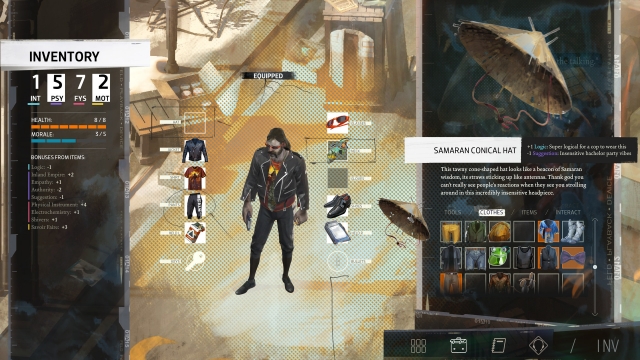 Don't hate me because I'm beautiful.

This ties in closely to the conversation system. It feels like every aspect of how you interact with Revachol and its denizens is being constantly analysed by the game. The game tries to shy away from clear-cut “Choice A” or “Choice B” scenarios, instead moulding your character and the world around you to how you deal with situations, where your ideologies sit, and what attitudes you adopt. The Thought Cabinet mechanic allows you to focus on various different mentalities you gain through your playthrough, which can provide you with new dialogue options, or bonuses and debuffs to your skills. Have you let your keen detective skills turn into delusions of grandeur? You might pick up a thought of being a Superstar Cop which can increase the learning cap of a few skills. Did you humour an NPC’s racist ravings? You can internalise the thought to provide alternative dialogue with them (maybe at the cost of your own real-life self-respect).

The skill-check system is refreshingly dynamic, not only taking your skills into account, but how you had interacted with the person/scenario beforehand to positively or negatively sway the result. Most of the skill checks can be reattempted once you level up the respective skill, but you’ll still find some which can be a hard pass or fail. There are also background skill checks occurring throughout every conversation, determining whether your mind will speak back to you and suggesting how you should handle the situation, which might not always be the most beneficial advice. That’s what sets this apart from most other RPGs I’ve played. Save scumming is something that most players do, and I’ve fallen victim to the temptation myself in many games, but never in Disco Elysium. Your failures still progress the story; maybe not in the exact step you wanted it to, but you’ll still be provided with a sequence or conversation that is thoroughly rewarding and enjoyable. The variety of background skill checks throughout your conversations means that they could be different every time, and by extension, you don’t have to worry about missing content through failure, because there is just so much of it. Like I said before, Disco Elysium is a ride. You can control it, but don’t be afraid to throw caution to the wind and let the game take you down unfamiliar paths. 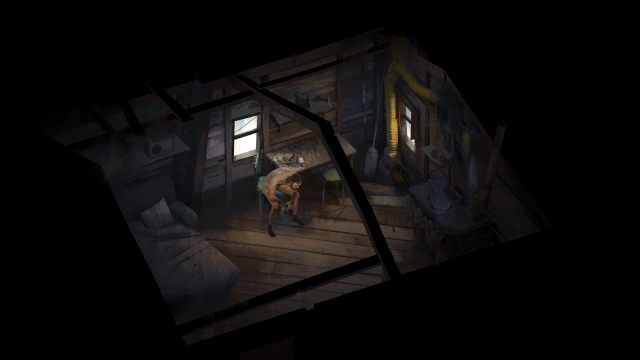 Please don't tell anyone how I live.

I’ve long been an advocate of recognising videogames as an art form, and Disco Elysium further cements that. A game that feels like it was a medium for a dedicated set of writers to deliver a story as opposed to a game that happens to have a great story, Disco Elysium is as thought-provoking as it is innovative. The paint-palette-esque beauty of its visual presentation, the soundtrack that perfectly sits amongst the ambiance of the world; you owe it to yourself to dive into this game. In this world nothing can be certain, except death, taxes, and Disco.

Traversing the mind of your character is as much a plot as the case you’re trying to solve, and once you’re immersed into the world of Revachol, you’ll be struggling to leave.