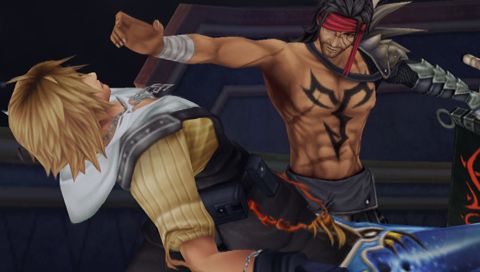 Breaking away from their usual story driven, turn based battling, stat grinding RPG adventures they have instead created a beat-em-up with RPG elements.

Sounds like a bit of a strange mixture right? It sure works though, fast paced action fights reminiscent of the style of Final Fantasy: Advent Children (Square-Enix’s second foray into the world of CGI feature length films) with the intriguing storyline and stat grinding you come to expect from a Final Fantasy title.

When you start the game you are asked for your name, preferred day of play and your play style. The day you choose is important because in the in game shop you are given discounts and special items are available for purchase on the day of your choosing. You choose your style of play from a choice of 3, Casual, Average and Hardcore. Your decision effects how many battles you need to fight until you get rewarded, Casual gamers get rewarded often but the rewards are small and Hardcore gamers get rewarded rarely but when they do the rewards are big ones. Average gamer is somewhere in the middle. Once you have made these choices it’s onto the game and into the story. 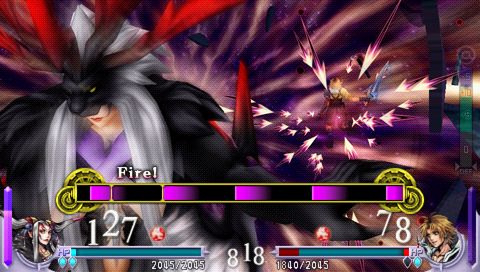 A war is brewing in the Final Fantasy universe between the forces of good and evil, you start the game fighting for Cosmos the goddess of light who isn’t really doing that great in the battle against Chaos the god of darkness. She finds herself being overcome and she instructs her knights of the light that they need to go find their crystals, fragments of good energy that when all are found will overcome Chaos.

Each warrior’s crystal is unique to them and they need to overcome many enemies and recognise their own goals in why they fight to achieve the crystals. 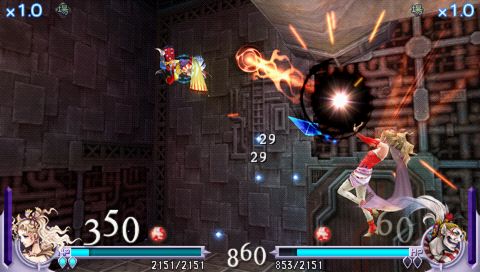 Battles are fought in various locations from the back catalogue of Final Fantasy, set to soundtracks from the corresponding games. The locations are fantastic with them all being interactive in some way, for example Kefkas Palace includes smashable glass that you can heave your opponent into. The areas are also on multiple levels adding a touch of strategy to the mix when choosing what attacks you want to send their way. It also aids the more defensive characters, who are able to get to a safe distance and fling ranged attacks at the opponent. 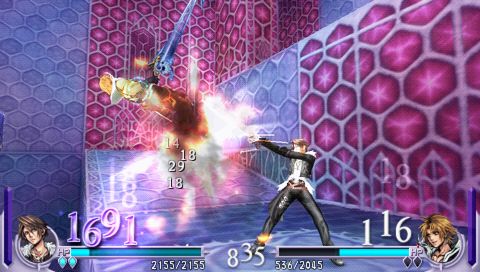 You may be wondering what this Bravery attack is all about, as mentioned before you and your opponent have a bravery stat and a health bar. The idea of the battles is to hit your opponent with bravery attacks, so it steals their bravery and then hit them with a finisher which damage is determined by the amount of bravery you have. For example if you have 250 bravery points and you hit your opponent with a finishing attack, that attack will hit for 250 damage. This is an interesting system that makes battles quite exciting as you have to get in, hit them with a bravery attack and then a finishing attack before they can get to you.

If you interrupt an opponent whilst they are trying to get to you, you can inflict a status called break. This basically means you stun an enemy for a few seconds and steal all of their bravery leading to huge damaging attacks often ending the battle outright.

On top of the break system there are also things called EX cores that turn up periodically. Both you and your opponent will be after these so get to their location ASAP and grab it. These fill up your EX bar, which is essentially your bonus attack, your crowning glory as it were. Once this gauge is filled up, attack your opponent with a finishing move and you are given the option to start an EX attack.

These usually involve button combinations and resemble the characters overdrives/limit breaks from the original games. For example Cloud’s (FF7) Ex move is he equips the Ultima Sword, his best weapon from his original game and hits his opponent with an Omnislash, which was his most devastating move in the original game.9 times out of 10 these attacks mean the battle's yours. At the end of a battle you are awarded EXP to help your character gain levels, various items and PP, points which you can spend in the PP shop which I’ll cover later.

Each characters story have 5 stages, these stages resemble a game board where you have to navigate your way around picking which battles you want to fight. These opponents look almost like chess pieces and when confronted will launch you into the aforementioned battle system. You start the level with a set amount of Destiny Points (DP). Each move uses one and you earn bonuses if you finish the level with DP remaining. Your overall goal is to destroy the end piece on the board which is either a Chaos Stigma, a non battle piece that selecting to destroy is enough or a big character battle, e.g., your selected characters Rival and gain levels and maximise your stats like you would in an ordinary RPG. Along the way it’s possible to unlock various things to help you in battles such as summons which pop in on battles and aid you in various ways. Most of these involve stealing your enemies Bravery points. 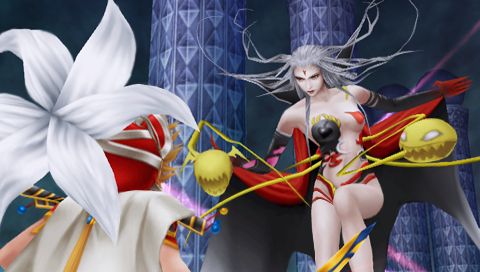 From the level screen you can enter the customisation menu, this has various different sub-menus such as changing characters abilities, having unlocked new ones throughout the course of battle. New items and accessories can be bought and equipped, whilst fulfilling certain battle conditions allows you to craft new items e.g., a flawless victory allows you to create a stat boosting ring. The game also features its own achievement style system - Accomplishments. In the accomplishments system there are over 100 to gain, all which give you prizes for achieving them, adding a challenge to battles. Also from this menu you can choose to use your selected characters standard or alternate outfits which are purchased from the PP catalog. 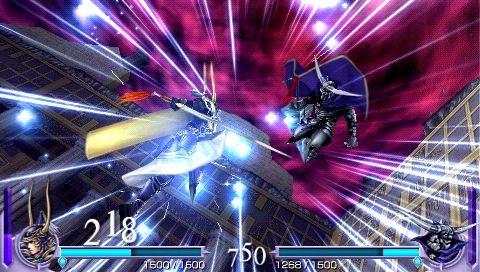 In the PP catalog you can buy many things, from new outfits, to new characters; also there are songs you can buy and play back via the in game museum (a collective of all the music, info, and cut scenes that you can play back at your own leisure, also available from the start menu).
Other options available on the start menu include the Quick battle mode - where you can train your character up if you’re getting stuck on Story Mode, and the multiplayer option, allowing you to take your PSP online and fight against your friends or strangers to level your characters up and gain rare items.

The multiplayer plays exactly the same as the quick battles against the computer except for racking up multiplayer stats, e.g. wins and losses. I found this to be pretty good fun and a nice opportunity to get away from the main game if a specific battle is annoying you. Also if your friend is not online and you have swapped friend cards you can battle a ghost version of them with all their stats just computer controlled. 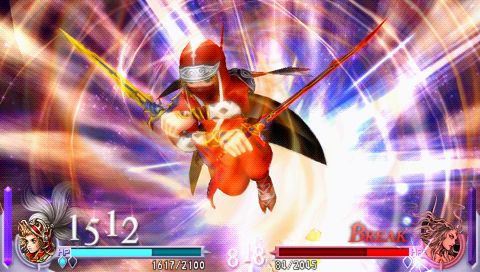 Also on the start menu is Mognet, this is basically an email system between you and characters from the game, where they send you little hints and tips and sometimes gifts i.e. PP and weapons. They sometimes also give you questions on the Final Fantasy games which if you answer correctly you get rewarded with big amounts of Gil (Money) and PP. The emails also provide you with fun facts and figures from the games which are a nice extra from those of you obsessed by Final Fantasy (read: ME!).

The entire game looks fantastic, the levels are well designed and fashioned to suit each different games style, the battle areas being on different levels look good too.
The characters are so well detailed also, their outfits have incredible amounts of work in them, and they all have very realistic animations and facial expressions.

Possibly my favourite part of the game though is actually the music, the first time I battled and heard the familiar sounds of Final Fantasy X’s battle theme playing I had a massive smile on my face. The music for me has always been one of the best parts of Final Fantasy, so to hear all the old favourites again in one place is brilliant and Square-Enix has excelled themselves here.

Square-Enix made quite a brave move with this game - yeah the vast majority of hardcore Final Fantasy fans were always going to buy it, but it could have been the game that alienated the fans from the franchise with how different it is. I think it has had the opposite effect though; it’s a refreshing change to have something new and totally original with so much focus on the older characters, music, rivalries and levels I can’t help but look forward to the future with Square-Enix and what they are going to bring us next.

This is definitely a game for fans of the series and possibly my favourite PSP game to date. A highly recommended purchase.
9.00/10 9

No problem, I'll give it a read after I'm done with his article. :)
Reply

lovely review and i agree completely - this is a fantastic game on any console and especially nice to have it on the psp!