DJ Star, a game in which you 'become' the DJ is taking a rather large leap, feet first into a world of clubs, pubs and parties in a game for the Nintendo DS that is tryingly aimed at more than just those who want to become DJs.

Little Worlds Studio have created a unique little game, in which you have to peddle your way to the titular spot of 'DJ Star' with help from your implied manager who also seems to be the doorman of the club your trying to get into at the start of the story. That's right, I said story. This is a game, about mixing music for varying amounts of club goers trying to give them a good time... and there's a story. 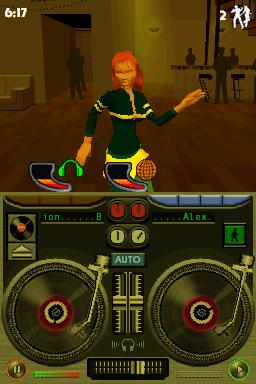 An alarming amount of the clubbers seem to be of the female persuasion. It's not to say there aren't men in the game at all, but to be in the starting levels of the game and to be feeling the slightly sexist tones means that they could already be cutting a huge potential of their market out. Quoted from the manual as their ‘Final Word': "When you are a DJ, the most important thing is that you make girls dance. Everything else is just anecdote." So far, the vibes just aren't good.

Next is the rating, PEGI have deemed this suitable for 12 years and upwards, mentioning sexual themes and bad language. I'm not getting at PEGI here but the developers as some tracks in the game have been edited quite heavily, censoring most if not all of the negative references the songs would usually make, but it seems that somewhere along the editing and censoring path, they got lazy, didn't take time to find the lyrics of the songs and ended up leaving some references in. I spoke to some parents about the aforementioned reference, and whether they would be comfortable letting their children play this game and hearing what some songs had to offer. Not surprisingly, the consensus came back as a no. Other games in the music genre have been savvy enough to remove any and all negative references and swear words, so that their games could happily be played by anyone. 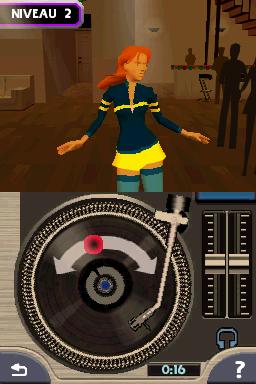 Moving onto the gameplay then, but the question is, where to start? Seemingly, there were no talks with DJs or equipment manufacturers as to what the parts were on a standard mixer. So your crossfader is now simply an "icon to mix the sounds on the two decks" and pitch faders have become "dials to speed up or slow down the track". As a DJ, there is no way I could condone this as an entry into DJing, though I was impressed by the use of "Beats per Minute" an actual term that DJs use, but this is likely down to the fact they couldn't really call them "Bums go by this fast" wait, what?. The next screen tells me this button automatically synchronizes the "Bums of the tracks on the decks". Bums? Are we really spinning tramps on the wheels of steel these days? What's really strange about this, is that it's all correct in the manual. Why couldn't they have transposed this into the game? 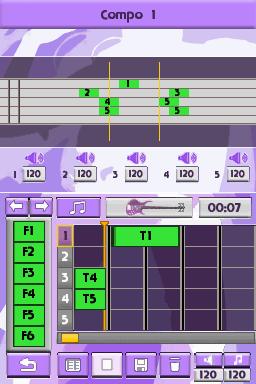 There are a lot of little bugs and annoyances that really hamper the games playability. Auto sync doesn't really work giving you at least half a beat actually in sync, the "dials to speed up or slow down your track" are backwards to what DJs normally use, using the stylus to pick up the needle is like finding a.. well needle in a haystack. "Headphone mode" splits the turntables to each speaker, so you can line up your track, but this is about as useful as a chocolate kettle, as the current track is usually still overpowering. The sampler, much like picking up a needle requires the accuracy of performing microsurgery, spinning the deck only holds a small sample, so you cant spin back to a certain place in the song and finally, none of the songs seem to have been matched in volume. With no "dial" to adjust this on the fly, the mixes go from quiet to loud to quiet again with the crowd noises being just too loud by default.

What does make this game shine, is the Creation Studio. Though I say shine, it's more of a dull glimmer. A dull glimmer of hope that this could rectify the game, and bring it back out of the pit that it's already dug for itself. Sorry to be the bearer of bad news here, but that isn't happening either. Slow down the track to the lowest BPM you can, and you'll get gaps between the loops, which breaks the flow of the song you're trying to create, then if it was this side of things you were interested in, DJ Star wouldn't be your first port of call anyway. 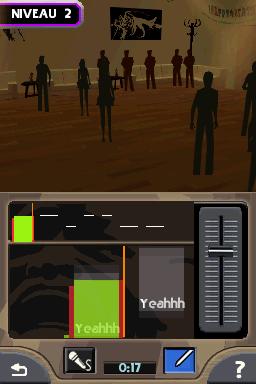 Overall, it's a brilliant concept for a game, albeit very poorly executed. The mixing is badly implemented which is bad news since this is the core of the game. The mini games, while fun, become boring very quickly. Those caught up by the games featured tracks will probably be upset to learn that they are all covers by the "John Stage Band". Perhaps a bigger focus on getting the music engine behind the game up to scratch (no pun intended) would have given this game the kick up the mixer that it really needed.

DJ Star, a game in which you 'become' the DJ is taking a rather large leap, feet first into a world of clubs, pubs and parties in a game for the Nintendo DS that is tryingly aimed at more than just those who want to become DJs.

Most music games on the DS are naff... it's a shame really, there's definitely potential.

not a game, but something that definately isn't naff is the Korg DS-10. a lot of fun just fiddling with the two kaoss pads in it making strange sounds and wierd synth lines.

not a game, but something that definately isn't naff is the Korg DS-10.

I'd have to say, the main difference between Korg DS-10 and DJ Star, is that the former was made, or at least had links in with a company that know something about the market they were aiming it at.
Reply