Bizarre. Impressive. Nonsensical. Clumsy. Fun. Despite some contradictions, these were the first few adjectives that popped into my head upon starting the game. Don’t Open the Doors! by Anton Riot is an indie claymation, dungeon-crawling, sandbox RPG with a gaudy colour scheme, a general “trippy” atmosphere and enough broken English for it to be a little too hard to follow. Combined, these aspects created one of the most unusual games I've played to date, and I've played a pigeon dating sim (Hatoful Boyfriend). What's so strange about it, however, is not the theme, the language or the story, necessarily. It's the fact that, stripped of all of this, it's your classic roleplaying experience, only you're experiencing it in a way unconventional enough that it feels like an entirely different genre.

First things first, I have to say hats off to the artists here: claymation?! And done so flawlessly in the context of videogames? That's a tough enough medium to use when following a fixed narrative, like in a film or TV series. Yet in a videogame, where contemporary plots are no longer as linear, and certainly not as fixed, one can only imagine how time-consuming that must have been. On the game’s respective Steam page one can find videos documenting the game’s plasticine creation as well, a little behind the scenes for such an interesting medium is a really nice touch. Ultimately, the ingenuity behind the graphics was a huge selling point for me. Balanced by the slightly overdone theme of the psychedelic, quaint woodlands, I cannot wait to see what new concepts Anton Riot will explore after this title. Though I understand I’ll be waiting a while. 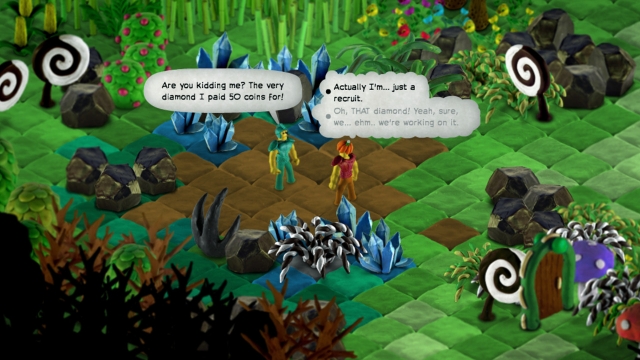 The game used broken English for its dialogue, so some of the plot and humour got lost in translation. There's obviously nothing entirely wrong with a game having imperfect English, but it does interrupt the flow and creates a subconscious awkwardness when first playing. The mechanics of the game were remarkably simple, even for those unfamiliar with basic keyboard and mouse controls. It utilised the WASD keys for movement, left click for combat, and Q, I, M for quests, inventory, map respectively. The simplicity was forgiving in a game with little instruction. There was no tutorial, and the pace of the first few quests was quite fast, so it seems that the target audience were casual, yet somewhat experienced gamers.

The maps were, in a word, cute: swaying flowers and trees, foraging hedgehogs and talking toadstools, your basic fairytale charm. They followed a standard grid layout with randomly levelled “dungeons” dotted around; this made for a sometimes amusing challenge, and you certainly couldn't approach the game in the same way you normally would for that genre. The occasional NPC would allow you to buy weapons, armour, bombs or potions. The story was fairly simple, but even I didn't mind, I got the feeling you didn't really play a game like that for the gripping narrative. Your job is to deliver a bomb to somebody, I still don't know who, to destroy the strange doors that began popping up and disrupting the utopian peace of clay-land. I have no idea if that's the name of the fictional world, it didn't say. The nature of the doors reminded me of the Oblivion Gates in The Elder Scrolls IV: Oblivion, although less demonic. 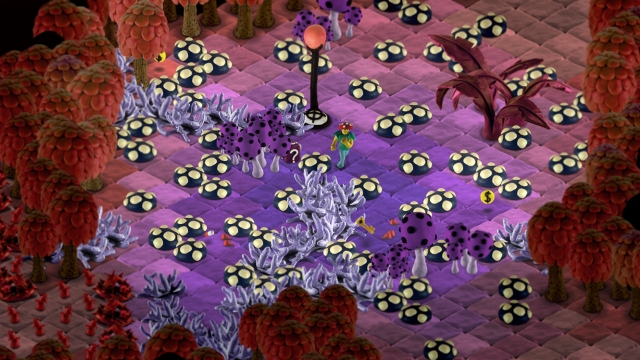 There were two types of dungeon formats, there were the literal “pre-door” dungeons and 'doorgeons' (my term for the dungeon-like rooms that existed behind the doors). All of which shared the similarities of having a series of puzzles or obstacle courses inside that needed to be overcome in order to succeed, both formats would have foes for you to vanquish as well. The dungeons, however, often had a more routine, sequential layout that would increase in difficulty, both through the course of an individual dungeon and from one dungeon to another. The 'doorgeons', however, would often be more chaotic: they didn't seem to follow any sort of order, and while they'd be a lot shorter, would retain the same difficulty level throughout, but would randomly increase or decrease in difficulty from one 'doorgeon' to another. I gathered that the idea behind this was for them to be a messed up mirror image of the world's challenges, absorbing qualities that exist in the world and warping them. Overall, the puzzles or obstacle courses, I felt, were excellently put together.

The ambiguity in certain quest instructions did become a little frustrating after awhile; At one point I had to retrieve a special item, in order to gain access to it I had to make myself red, in order to do this I had to kill a red hedgehog. Insinuating that I was to bathe myself in the blood of this hedgehog, which was, even for me, a little disturbing. Pretty self-explanatory, right? Find hedgehog, kill hedgehog, get thing. Only, when I went to slay my adversary, I was stumped. I tried hitting it with my hammer, the only weapon available to me at this point, exploding it with a variety of bomb types, which, as it turned out, were the only two options for killing stuff. Neither seemed to even phase the critter. As this game was so new and 'indie' there was no helpful information online; unfortunately, this is where the game ended for me, so I can’t share any tips. While I may have been impeded here, I think this was less to do with the game and more due to personal circumstance. With that in mind, it’s still worth noting that when a game lacks this much direction, there's usually the assumption that the player processes things in the same way that the developer does. In my experience, this tends to alienate potential players more than it challenges them. 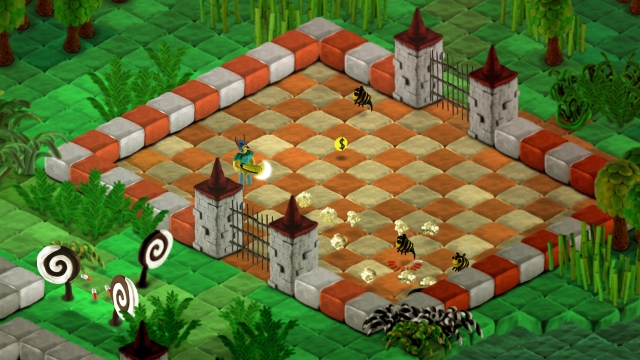 Overall, despite the hindrances that I came across, this was a pretty fun game. A marriage of classic, even nostalgic gaming, to something quirky. It provided just the right amount of challenge in most areas, some parts could use a little work, but in general, it wasn't enough to deter me. I admired the art style especially, there was a huge aspect of intelligence to this choice, with just the right amount of whimsy. Don't Open The Doors! didn't take itself too seriously, the developers obviously worked hard to create a completely bug-free and almost seamless adventure, but you still got the impression that it was laughing at itself along the way.

Objectively, I don't really see much of a flaw with this game at all. It was actually put together beautifully, but, personally, it wasn't the most gripping or entertaining game I've ever played. This is entirely down to preference and I encourage anyone to give it a go. I guarantee you won't be disappointed. If you like claymation, and indie games, and RPGs.

Objectively, I don't really see much of a flaw with this game at all. It was actually put together beautifully, but, personally, it wasn't the most gripping or entertaining game I've ever played. This is entirely down to preference and I encourage anyone to give it a go. I guarantee you won't be disappointed. If you like claymation, and indie games, and RPGs.

"Bizarre. Impressive. Nonsensical. Clumsy. Fun." All superlatives that apply to me. Although impressive is usually "it's impressive you made it to adulthood"