If you’re the curious sort, several questions might float across your mind when playing through Ego Protocol: Remastered’s assortment of tile-based puzzles. Questions like: “who is this helpless little robot?” “Why am I guiding it through these deathtrap mazes?” And “what on Earth is an Ego Protocol?” To all those inquisitive minds, I’m sad to report that answers will not be found between the title screen and end credits of Ego Protocol: Remastered, or indeed, anywhere else. Instead, what you’ll find here is a simple puzzle game that pays lip service to sci-fi themes yet makes no attempt to actually do anything with them. Each of the game’s 60 stages presents a new 3x3 grid of sliding tiles, full of obstacles, that make up a shifting maze for players to guide a robot through. These tiles aren’t all made equal: some are dead-ends; others have pitfalls, turrets, enemy robots or teleporters. As the robot’s designated guardian, you’re tasked with rearranging the surrounding grid while it blunders carelessly forward—ever at risk of being misdirected, shot up or otherwise obliterated by each tile’s respective threat. The mechanical doofus’ lack of self-preservation instinct is reminiscent of the Amiga classic, Lemmings, which is probably the only flattering comparison you could make with Ego Protocol.

It’s not as simple as sliding the pieces into the correct position and watching the robot walk to safety: the grid/maze will often have to be adjusted while the robot blindly marches through it, almost like something you’d see in Looney Tunes—just, without the comedy. There’s an element of timing to many of these stages too: you’ll sometimes only have seconds to shift a tile from one position to another before the moment passes. Unfortunately, the directional buttons can sometimes be strangely unresponsive, requiring multiple presses to register just one movement. This means that, when timing is a serious factor, success usually hinges upon sheer luck more than anything else. If you’re after a ‘my controller is on its last legs’ simulator, Ego Protocol: Remastered isn’t a bad shout: it certainly made me wonder if my joy cons were dying on more than one occasion. There’s not much to point out as a real issue with Ego Protocol’s gameplay, but the truth is that the core of it isn’t that fun. I almost feel guilty saying this because it’s largely an inoffensive little puzzle game; it’s also just, so… nothing. It’s bland, so very bland. As mentioned earlier, there’s an attempt to hide that blandness behind a wafer-thin sci-fi veneer, but it’s about as useful as spitting on a wildfire in terms of improving the game as a whole.

As a side-note, and because I have little else to say about the game, I’m led to question the use of ‘Remastered’ here. It’s certainly a re-release—the original Ego Protocol came out on Steam in 2016—but the word ‘remaster’ in games usually suggests an improvement in the visual quality which this release seems to lack. If anything, this game looks worse than the PC release. I admit, when discussing a title that sits at £4.49 RRP, every complaint feels like a nitpick, but a flaw is a flaw regardless of how cheap a product might be. 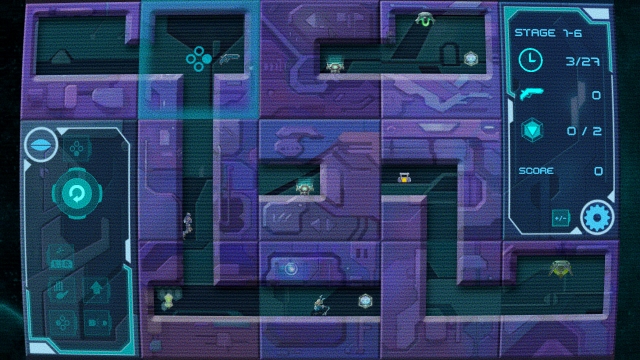 Ego Protocol: Remastered is a tile-sliding Lemmings-like that offers about as much excitement as a geriatric knitting club. Outside of some temperamental controls and poor use of its sci-fi theme however, there’s not much to highlight as a real issue. It’s not offensive enough to incite mass riots but it still feels like a chore every step of the way.

Ego Protocol: Remastered is a tile-sliding Lemmings-like that offers about as much excitement as a geriatric knitting club. Outside of some temperamental controls and poor use of its sci-fi theme however, there’s not much to highlight as a real issue. It’s not offensive enough to incite mass riots but it still feels like a chore every step of the way.