Elli, an isometric puzzle platformer for Nintendo Switch from BandanaKid, isn’t a game that’ll wow you, by any means. It’s a perfectly decent example of the genre and enjoyable from start to finish. However, as I continued to work my way through its familiar puzzles and navigate its platforming sections, the feeling that it lacks any ambition or unique mechanics or ideas to call its own slowly crept over me, and by the time the finale came around I was left somewhat dissatisfied.

You play as the titular Elli, guardian of the five crystals. While celebrating her 600th birthday at home with her friends, she is alerted to a commotion outside and finds the crystals being stolen by the mischievous Ghasti. Envious over Elli’s position as guardian and eager to prove that she can do the job, Ghasti nicks the crystals while they’re outside in plain view right in Elli’s front garden (good job, Elli) and whisks them off to another dimension. Elli, probably purely under the motivation of wanting to not seem quite so shit at guarding those crystals, pursues Ghasti across jungles, temples, a volcano and other locations in a bid to retrieve them. Oh, and those crystals? If they’re not returned to their proper place, they’ll also rip apart space and time. No pressure, ace guardian. Right out of the gate, Elli’s initial impression is a positive one. It’s certainly a treat for the eyes, with an aesthetic that is reminiscent of both Rime and The Legend of Zelda: Breath of the Wild and remains consistently vibrant and colourful. Inhabiting the world is a little race of… things?... called the Mandragora, a charming cast of characters on hand throughout to inform Elli of Ghasti’s last known whereabouts and likely make the player chuckle with their inane ramblings and claims to their race’s leadership.

On the gameplay side of things, as mentioned earlier, Elli is perfectly serviceable, if overly linear and utterly unoriginal. You can jump, pick up items needed to solve puzzles and activate a pulse with your magic staff. These pulses serve to reveal hidden platforms and traps, as well as allowing you to activate certain mechanisms and defend yourself against harmful projectiles. With the exception of the odd occasion when the fixed isometric camera makes it difficult to judge your position when landing jumps, the platforming in Elli never enters particularly challenging territory. It’s at its trickiest whenever you enter a time rift to retrieve a crystal. In these sections, you view the action from a 2D perspective and race to the crystal’s location while the collapsing time rift threatens to suck you into oblivion. These time rift moments are more difficult than the standard platforming, but the added abilities to double jump and teleport forward a short distance take a lot of the edge off. Super Meat Boy, this certainly isn’t. 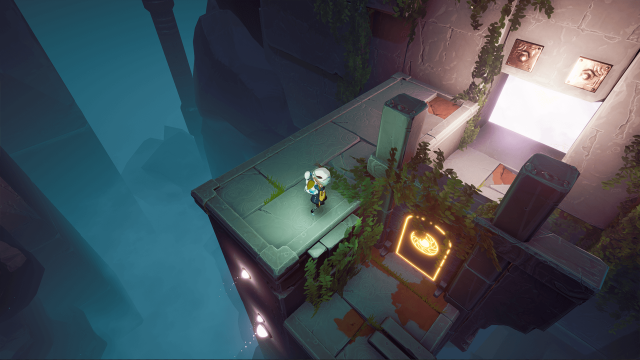 Likewise the puzzles, save for a handful, aren’t especially taxing, mainly due to them relying on tropes that you’ll likely have encountered countless times before. You’ll retrieve keys to open locked doors, carry blocks to place on buttons to activate or deactivate traps and be required to collect orbs within a time limit to raise platforms. And there’s little variation in the puzzles or their solutions, either. They basically start off small and self-contained and wind up spanning multiple floors and rooms, but their mechanics change very little. Elli is essentially a six-hours long Legend of Zelda dungeon: fun to play through and figure out but offering very little pushback if you’ve even the slightest bit of experience with videogames in general.

On top of the platforming and puzzles, Elli provides very little incentive to explore every nook and cranny of its world. There are gems to collect that can be used to purchase new outfits and staffs, while hat coins can be exchanged for new headgear. The hat coins are actually quite well hidden and completists will probably want to scour each area to collect them all, but every purchasable item is purely cosmetic and has no bearing on gameplay. They’re there purely for the sake of being there, however, any game that lets me wear a cap with a little propellor on it certainly has something going for it. 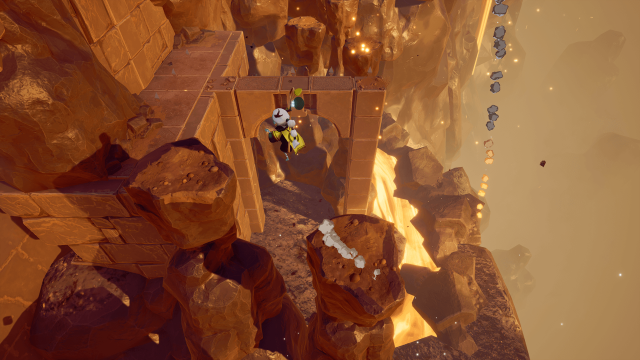 In the short time I spent playing through Elli, I did encounter a few glitches. At one point I was supposed to use a bomb to blow up a boulder and expose a crank in order to progress, but found that even without removing said boulder I was still able to operate the crank. Additionally, while navigating a platforming section featuring blocks that would collapse a few seconds after I stood on them, I became trapped inside one of these blocks as it respawned, forcing me to restart from the last checkpoint. Luckily, the checkpointing in Elli is liberal enough that I lost a negligible amount of progress.

Elli, then, is the very epitome of a mixed bag. On one hand, it’s enjoyable to play, controls well and its gorgeous art style and charming dialogue remained endearing right up until the ending. However, it’s an unambitious and sometimes flagrantly derivative game that could have used a few unique ideas to carve out an identity of its own and its short runtime and lack of incentives to replay it are significant bugbears. At £17.99 on the UK eShop it’s difficult to recommend, however, should you find it reduced and be inclined to overlook its lack of originality, Elli is a decent enough way to spend an afternoon.

A charming, pretty and well made puzzle platformer, Elli is unfortunately short, unambitious and derivative, while offering no incentive to replay it once it’s over.