Europa Universalis IV is, at the risk of cliché, more than just a game. It’s a scaffold for your imagination. Yes, it so happens that it’s also a bloody great game, but like all great media pieces, it’s not just the individual parts of the product that make it great. It’s what the audience can do with, and how they react to, the concepts and principles of those parts combined. EUIV allows you to take history into your own hands and make any change that you desire. What your imagination can conjure, EUIV will help you fulfil.

One might argue that this is a bold claim for a game that takes place entirely on a virtual map of the world. Of course, those same people are unlikely to have tried a Paradox grand strategy game before. It makes sense, then, that Paradox have taken a fair few steps to make things a little clearer to new players. A simple, but informative, tutorial can be found upon starting the game and while this doesn’t quite capture how all the mechanics work in unison, it does a good job of teaching new players the basics, as well as introducing newer elements of the game.

The biggest step Paradox have made, however, is in the UI. Every single piece of information is clearly explained by an info panel that describes what effects a decision will have or what is causing a certain event. Hover over another nation’s opinion of yours, for example, and you’ll see a breakdown of why they like/dislike you. Or hover over the two available decisions for an event, and you’ll see how each of these decisions will affect your game. In many ways, the UI has been developing over the past few Paradox grand strategy titles, but this feels like the big final jump into near-perfection territory and ultimately it means that new players can learn while they play. 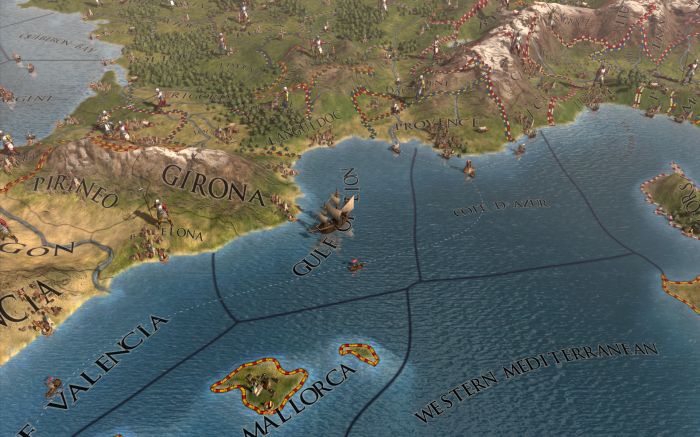 Of course, the reason the UI is so useful is because it helps to unravel the complexity of the core gameplay. No degree of explanation, however, can really prepare players for what EUIV has to offer, it has to be played to be truly understood, and it has to be played a lot to master. If you want a full descriptive rundown of the new mechanics found in-game, then you’re best off reading my preview first. Which was written after playing the beta for about 30 hours, so is still very well informed. It’s safe to say though that the new systems introduced, as well as the refinements to the current mechanics, are fantastic. What really strikes me about EUIV is the near perfect sense of balance that’s found within the game mechanics.

The three Monarch Power categories (diplomacy, administration and military), of which you gain points for depending on your leader’s ability, form the backbone of the game. A lot of your decisions will be based around how to spend each of these. You may want your administrative points to upgrade your technology so you can build a shiny new manufactory, but your stability is also low and you need those same points to give it a boost, or else face widespread riots. Or perhaps you need some diplomacy points to gain a new ‘idea’ (more on this later), but you also need them to settle an aggressive peace arrangement with your enemy. These kind of decisions are what make the game so endlessly engaging.

The big game-changing decisions don’t stop with Monarch Power either, not by a long shot. There’s diplomacy itself to think about; how other nations view your own and vice versa has a huge impact on the landscape of your world. In EUIV being on good terms with another nation will actually benefit you, particularly if they have a sizable military. While getting on the wrong side of other nations could have disastrous results. What makes this so fun to play is that everything is presented to you in-game and, as mentioned previously, you can easily see what decisions are affecting a nation’s opinion of you. So manipulating opinions and forming alliances becomes a game in of itself, and it’s a fun game to play if you can do it right. 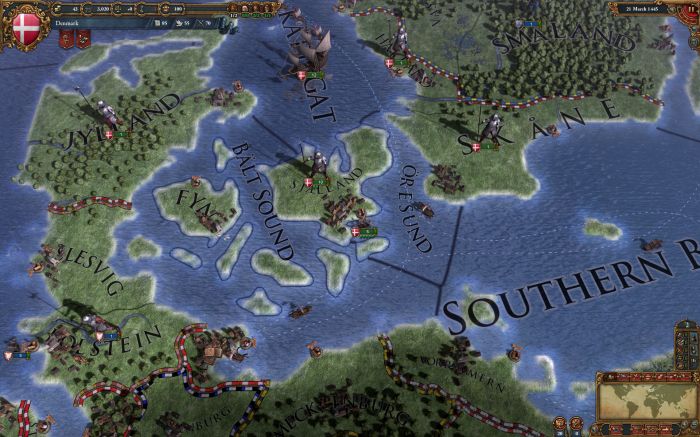 It doesn’t end there either. There’s still finer details to manage, like your economy, your legitimacy and prestige, as well as your colonial ventures. Plus there are new, more specific areas to monitor like the interesting trade system, which is well thought out and realistic. Or your national ideas, which is a brilliant new system for unlocking area specific upgrades, like trade bonuses or military advantages. All of these elements, and more, create an endless sense that things need to be handled and it is this feeling that keeps you invested in your campaign. Although, it’s also the desire to expand your nation beyond any sense of historical accuracy. It’s in the growth of your empire and the success of your ventures that EUIV goes from a well-structured bunch of game mechanics to a beautifully crafted and well-balanced game.

With the whole world map now available to play all the way through the game’s 300 year time span, there’s a lot of land to take as your own. What’s more, there’s a lot of nations vying for power of their own. The fundamentally cool aspect of EUIV is that you can play as any of the nations on the world map, no matter how small, insignificant or unusual. While Paradox’s previous grand strategy game Crusader Kings II only allowed you to play as a select collection of European powers (although others were added later in DLC), Europa Universalis gives you the opportunity to play from any cultural or geographical start point. So if you want to take the whole of the Americas as the Aztecs, or raid Europe as the Ming Dynasty, or raise Wallachia as the greatest power the world has ever seen, then you can. So long as you’ve got the skill.

The real beauty of this system is that each nation (give or take) presents a new challenge. Saying that, it does seem that Paradox have done some rigging to give a bias to the European nations, so these will probably be the most interesting nations to play as. They can research technology a lot quicker than most other cultures so have an instant advantage over Chinese, African, American or Russian nations. So it’s recommended that you play as one of the core European powers to start with. Despite this, there’s still great fun to be had while playing as other nations. In my current campaign, I’ve taken Bavaria from a tiny European nation to the leader of the Holy Roman Empire and one of the key players in European politics. I also played a game in which I united Japan under one banner and began to raid the Korean and Chinese territories. I’ve played a few more campaigns and they were all great fun and each presented new challenges and unique situations. It helps that Paradox have given each nation special missions that relate to their geographical location as well as their historical impact. For instance, it was a ‘national decision’, as they’re known, to turn my Takeda tribe into the unified nation of Japan. There are also more mundane decisions, like increasing taxes based on historical events, but these only build up the sense of individuality from one campaign to the next.

The one significant feature I’ve yet to mention is warfare; I’ve seen people note that in Paradox strategy games war isn’t significant. Certainly when you compare it to something like Total War, the combat is less significant...funnily enough, but I’d argue that war is a significant and fun part of EUIV. Admittedly, it’s not exactly exciting in the same way as a battle in Shogun 2, but really it works in the same way as the rest of the game. Rather than high-octane, visceral gameplay, it’s all about clever management and good decisions, much like actual war. What makes warfare fun in EUIV is the feeling that there’s a lot at stake and winning one battle can change the future of your whole nation. Of course, this same trait means that when your army unexpectedly loses, it can feel unfair. That’s life, however, and I’d strongly disagree with any implication that the game is too random based on this.

On a different note, the one thing that’s radically changed from EUIII is the graphical capabilities of the game. While the actual raw graphical power of a digital map is naturally somewhat lacking, there’s no denying that Paradox have done a great job making the map not only look great, but also feel alive. The terrain map mode looks beautiful and works particularly well with the global map. It’s a slight shame, then, that I spend almost the entire game in the nation map view so that I can clearly see national borders and territories. Still, even this map mode looks great and the various other map modes are both interesting and useful. The unit sprites have also had a visual overhaul since EUIII and there are a nice array of models based on time period, culture and unit type. All said, it’s a good looking game and a fantastic looking world map. There’s no denying though, that you can get a bit bored of the map after extended play sessions. 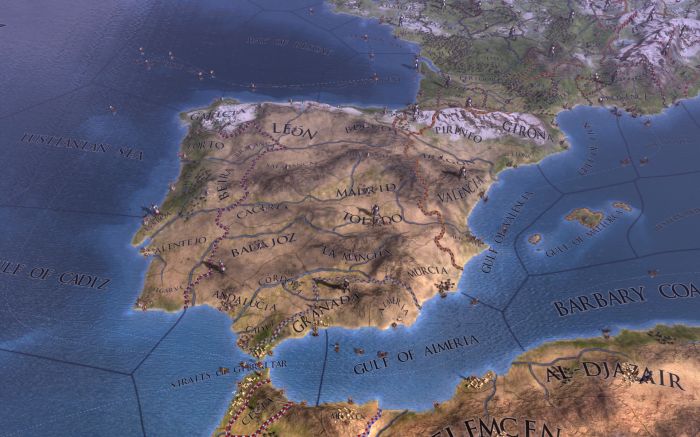 Sound design is also perfectly functional, but again due to the nature of the game, nothing special. The collection of backing tracks don’t get repetitive, which is thankful, and the nuances in beat and tone add to the moment. Start a war, for example, and an apt song plays in the background. The EUIV theme song is also a great little tune that introduces the game nicely and gives a sense of grandeur to the whole thing. Small sound effects, like marching troops, horns or even the small click when you select a territory, are subtle, but satisfying.

Through a combination of perfectly balanced mechanics, a vast and fully playable game world as well as satisfying overall gameplay, Europa Universalis IV is one of the best games I have ever played. My only caveat is that the game is only as good as your imagination; sure it’ll build up a convincing historical world for you to do with what you wish (which is great enough as it is), but it is how you enjoy the sense of freedom and how your imagination plays with this world that the true brilliance comes out of EUIV. Once the initial learning curve is navigated, and it is a steep one, EUIV constantly rewards players with its sandbox world. It’s interesting, wonderfully complex and most of all, near endlessly fun.

Through a combination of perfectly balanced mechanics, a vast and fully playable game world as well as satisfying overall gameplay, Europa Universalis IV is one of the best games I have ever played. My only caveat is that the game is only as good as your imagination; sure it’ll build up a convincing historical world for you to do with what you wish (which is great enough as it is), but it is how you enjoy the sense of freedom and how your imagination plays with this world that the true brilliance comes out of EUIV. Once the initial learning curve is navigated, and it is a steep one, EUIV constantly rewards players with its sandbox world. It’s interesting, wonderfully complex and most of all, near endlessly fun.

Not sure how this one has crept under my radar. Been getting good reviews all over the place, think I may have to wishlist it.