I know that I’m not a saint. Back in the 90s, I definitely copied floppy disks and I often tip less than the recommended amount at museums. I’m not great around other humans as many of their actions tend to baffle me. Nonetheless, I do at least try to be nice to people, even if there have been times in my life when I have fallen short of this for various reasons. The important thing though is that I usually try to live a life that doesn’t harm anybody else. This isn’t quite as fun as taking over the world though, so Evil Genius has always been one of my favourite games to experience what it would be like to hollow out a volcano and make the world bow to my will.

I was a huge fan of the original game from Sierra back in 2004, but with the demise of that company, I never thought I’d see a sequel. Thanks to Rebellion purchasing the IP though, we have a new game in the series after 17 years in the wilderness. If ever a game deserved the title “cult classic” then this is it, so the British developer has a lot of eyes on it with the resurrection of this title, and I don’t envy it having to please avid fans like me who have been playing the original for nearly two decades. 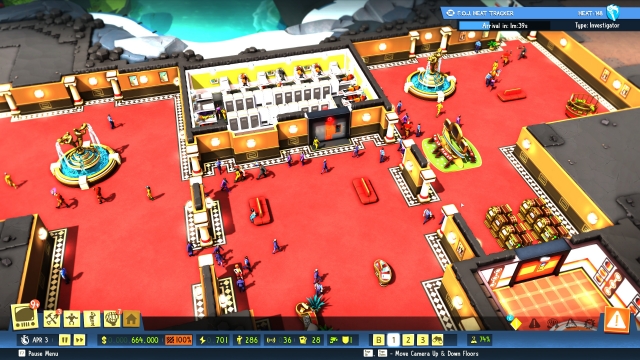 For those not already in the know about this hidden PC classic, it’s a base-building simulator at heart. Think Prison Architect or Theme Hospital, but set in the lair of a villain from a kitsch 70s spy film. Your ultimate aim is to literally take over the world, and to do this you fill your lair with minions to do your bidding. It’s not easy though as your activities are constantly being monitored by various “forces of justice”. This can take the form of inspectors snooping around, saboteurs trying to destroy your base, rogues stealing all your gold and possessions, or even “super spies” who are the toughest of opponents and can take out a whole base if you’re not careful. Think James Bond, Jack Ryan, or Jason Bourne and you get the idea (other spies with names that don’t begin with J also exist).

The overall game mechanics are largely unchanged from the first game, but some tweaks have been made. For example, the first game saw the option of building hotels and casinos to disguise your operations as a legitimate business, but these came a little way into the game. This time, you have a barebones casino from the outset and in the early stages, you’ll be trying to keep any investigators in there as much as possible while you build up your base behind closed doors. If they do make it into your base, then you can either ask your minions to lead them back to the casino, capture them, or kill them. This mechanic hasn’t changed from the initial game, which means that you have to tag agents individually one at a time as the option to select multiples isn’t there. Later in the game, you can set automatic tags based on area, but it would have been nice to have an option to select multiples like you would normally see in a RTS game for example.

As well as building, repairing, upgrading and protecting your base, you can also send minions out into the world on schemes. These could be to unlock new types of minions by capturing one and bringing them to your base, or they could be to earn money or reduce your visibility to the forces of justice to stave off visits from them. This was present in the first game, but it’s a little different this time as there’s no pretence of getting your minions back. It’s very clear that if you send them out on a scheme, they will either get captured or die. In the original title, missions would often result in many of your minions being lost in action, but not all of them. 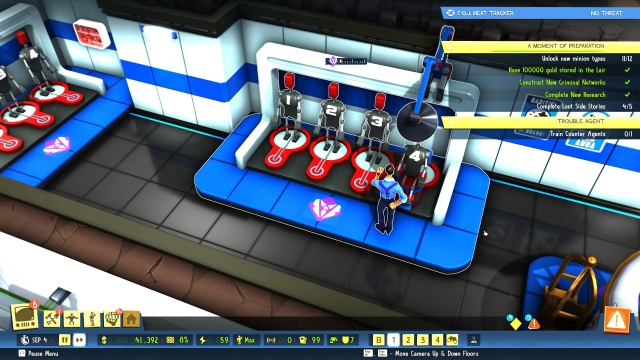 This time round, minions are seen as being a bit more disposable. This is reinforced by the fact that once you have built training machines to train a particular type of minion, even if all of that minion type die, you can still train more rather than having to go and kidnap another one from the world. This disposability changes how you end up playing the game and it never feels as necessary to protect your more expensive minions. From a logical point of view, it makes sense as they are indeed minions, but it does mean a slight shift in thinking. The good thing is that it means minions on the world map now don’t count towards the total you can have in your base. This means that once you’ve sent them out to their untimely demise, they can be instantly replaced so you aren’t leaving your base with reduced defences.

My absolute favourite part of the original game was the trap system. You can build big cartoon-esque traps that keep agents from the most important bits of your lair. These vary from laser walls, to giant fans and soapy floors. In the original game, it was possible to link these together so triggering one caused others to be triggered and could set off chain reactions. This has been changed quite a bit so instead, traps have particular trigger points and traps that move agents such as boxing gloves on springs or fans show how far they will be launched. You can then match up the two to get agents bounced between triggers points. There’s also a short cooldown which has been added to the triggering of traps. This all means that whilst you can still chain traps together, it’s no longer possible to create a trap that goes in a never ending loop. You also don’t gain gold from agents being caught in traps like in the 2004 game, so their use is less important. I found this to be a shame as I really loved the old trap system, but the new traps that have been added to the game helped to make up for the disappointment. One of my favourite new additions was the “puppy of death” which is just as adorable as it sounds!

It’s worth noting that the above trap system took me an incredibly long time to work out. There are no tooltips or help menus that explain how the trigger system works, so you are left to work things out yourself. This applies to a number of things in the game, where an items function is explained in part but full disclosure isn’t given. Agents have stats for example, but their exact purpose isn’t stated so I had to work this out through trial and error. The card tables and roulette wheels in your casino have an option to toggle “scam tourists” on and off, but it’s not made clear that whilst you can earn money from them whilst set to this mode, they no longer reduce the stats of agents coming into your base. There are lots of examples of this kind of thing throughout the game and sometimes it feels like the team responsible for documentation were on holiday at the time of launch. It’s not a deal-breaker, but it does make Evil Genius 2 more frustrating than it needs to be. 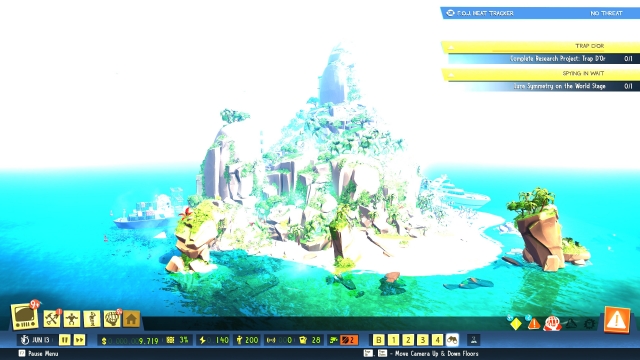 There’s a tonne of content included, with completion time feasibly going into the hundreds of hours if you choose to do all the side quests as you go. At the time of writing, I’ve sunk about 60 hours into the story mode and I’ve still not quite completed it with any character yet. There’s a sandbox mode that just gives you unlimited money to create your perfect base. This isn’t particularly challenging, but it’s a really good way to get that trial and error learning mentioned above done without risking messing up a base you’ve spent a fortune on. Bases are much larger than the previous games, with stairs and multiple floors now available. The stairs are fiddly to get placed, but they do come in handy. What perplexed me though is the maximum number of minions is still relatively low. You can have a maximum of 300 minions at any one time and with bases four or five times larger than Evil Genius, it means that there is often a fair bit of sparsity. This problem is confounded when you have agents snooping around your base that you need to find and there’s a tonne of ground to cover. Sometimes agents will leave bugs on your walls too, which are incredibly frustrating to discover, especially as much of the game lends itself to a top-down view.

There are some niggles that I had with Evil Genius 2, but it’s fair to say that with over 100 hours racked up and counting, I’m still enjoying it as much as I did the original. There are a few changes to the gameplay but the core is largely as before so if you loved game number one, then you will likely love this one too. I would like to see a fair few quality of life changes though, especially with regards to documentation: even just a game manual would help! Just a few tweaks and I would have been considering a perfect score, but as it is, this is a great game with just a few flaws that can be overlooked. It keeps the spirit of the original and doesn’t mess too much with the core gameplay so if you go in expecting more of the same, but shinier, then you will likely come out very happy. Now if you will excuse me, I need to go fire molten gold at a country again. Mwahahaha. 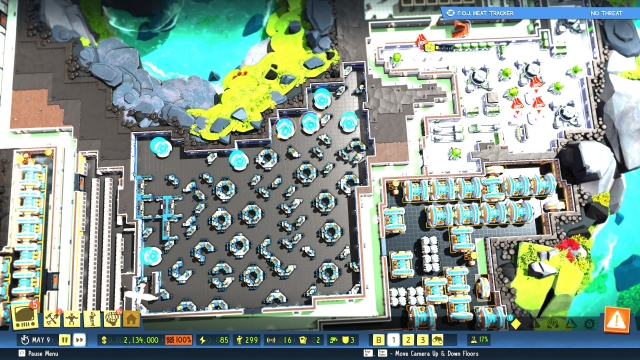 There are issues with odd choices or explanation of game mechanics, but overall this is a great sequel to a cult classic. If you like the original then it’s highly likely you’ll be able to overlook the slight foibles like I did and have a great time with Evil Genius 2.