Pitched as an arcade-style, spin-off of 2016s Enter the Gungeon, this new title from developer Dodge Roll tasks players with escaping the now collapsing Gungeon. In order to do this, players will need to ride a series of ridiculous elevators as they climb their way out to safety. Along the way they encounter numerous foes, bosses, friends and even the odd mini-game. It’s everything that players have come to love about Enter the Gungeon but now in a new perspective as the action switches to side-scroller rather than top-down for this ride.

The change of perspective doesn’t mean a change in the core identity of the gameplay players have come to know and love. You’ll still be running about the screen fighting for even an inch of free space as enemy bullets come in from all directions. Dodging and making effective use of the limited ‘blanks’ you have to clear the screen are as important as ever, along with the weapon you wield. However, this time around you won’t be finding weapons in the gungeon, as thanks to the magic of the Sorceress, your gun will change at random as you progress through the Gungeon. 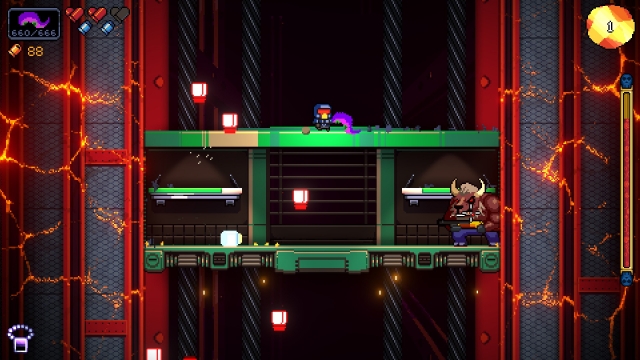 When you start a run of Exit the Gungeon, you will quickly notice a combo counter in the top right of your screen. As you rack up the kills your combo will increase, and as it does the more powerful your gun will become as it randomly changes form. Should you take damage and break your combo, then the process needs to be started again but thankfully your gun stays in the current form it is in. This system really fits the new side-scroller perspective and only feeds into the bullet hell nature of the game. You are rewarded for playing well but never really feel punished should you slip up and take a hit.

Much like the title before it, the guns you will get to wield in Exit the Gungeon are powerful if also outrageous. You might start off with a simple handgun before using some more traditional guns that fire regular bullets like shotguns and rifles, before reaching the more outlandish options. Say for example a shotgun shell that fires shotguns, a giant battery that shoots pure energy, or even the Abyssal Tentacle that shoots out a tentacle to grab and damage your enemies. As you play, you will unlock more weapons that get added to the pool of options meaning you never really know what will turn up. It’s not just weapons you will be unlocking in Exit the Gungeon though, as there are plenty of secrets to discover. As you race to escape the Gungeon you will find mini-games, perks, characters, and even new items to name a few. With each playable character having their own route out of the Gungeon as well, you’ll find plenty of reasons to keep revisiting and pushing further to reach the exit. Which won’t be an easy feat given the number of enemies, bullets, and bosses you will have to overcome on the way. If you thought the bullet hell aspect of Enter the Gungeon couldn’t get turned up to 11, then you are mistaken. Because here it’s more hectic than before and the adrenaline rush is amazing.

Exit the Gungeon was originally released as part of the Apple Arcade in September 2019 before a release on PC and PlayStation 4 in March 2020. Playing the PC release, there are not many notable limitations in place for, say, performance and resolution but some iOS design choices do remain. For example, one mini-game has you launching bullets out of a cannon to earn points. This is one of the few places where you will need to click, hold, and drag in order to interact, similar to using a touch-screen device. It’s not bad, but worth calling out as the tutorialisation of these controls was lacking on PC. As a whole, Exit the Gungeon is a solid spin-off that manages to deliver the same level of enjoyment as its predecessor, albeit for nearly half the asking price. With plenty to unlock and countless runs to enjoy, players will be hard pressed to put this title down with its addictive gameplay loop. Though it’s not the follow up to Enter the Gungeon that many might have wanted, it’s definitely one worth checking out if you enjoy roguelikes and bullet hell titles. Now to see how quick the speedrun is and feel bad about how slow I am.

Exit the Gungeon (Reviewed on Windows)

Exit the Gungeon is a solid spin-off that is able to deliver a level of enjoyment that matches its predecessor, while also standing tall on its own two feet.

Exit the Gungeon Released on Switch and PC