I’ve always had a soft-spot for F1. Lazy Sundays sat with my father watching drivers zip around the track at breakneck speeds, to playing early adaptations of the sport on the Amiga, with Nigel Mansell’s World Championship Racing - through the later years of F1 World Grand Prix on the N64. However, none of those ever truly captured the sport, but that’s more a limitation of the technology of the time, rather than anything else. It’s mad to think that Codemasters has held the F1 license for nearly 10 years now and how technology has changed in that timeframe. In that time, we’ve moved from the Xbox 360 and PlayStation 3, up to the Xbox One and the PlayStation 4, with them now both having more powerful versions still, allowing for 4K and high dynamic range imagery. And it’s only really with these enhancements do we get ever closer to that real “being there” feeling of the sport.

However, what strikes me most about the latest outing of the F1 series, is just how alike it is to previous iterations. Loading into the menu screens and moving about feels just as homely as it ever has. And this shouldn’t be seen as a dig on Codemasters in any way, it means that it’s managed to find a system that works, works well, and doesn’t need to be broken under the veil of “change” - instead, it’s been able to pour more time and polish where it really matters - the racing, and looking into some of the other changes they’ve maybe had on a whiteboard in the office, that time and money have simply meant weren’t feasible for earlier iterations of the title. 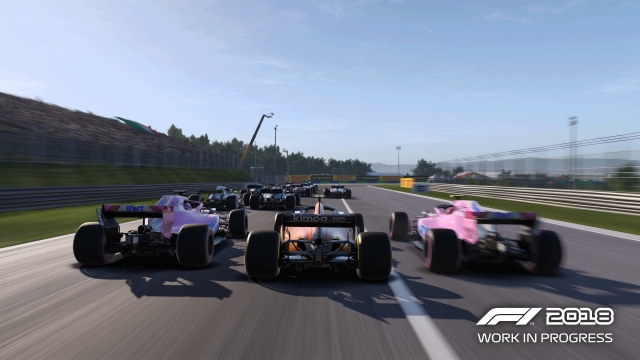 One of those new features is the post-race interviews. After a race, you’re presented with a series of questions that depending on how you answer them, can have repercussions for you with your team. It’s pretty easy to work out which of the options leave you in the best light with your team, however, and the added pressure of being made to choose an answer within a timeframe doesn’t really do much to force you into a path of upsetting your team for any real reason. There’s also the usual affair when it comes to managing your car and place within the team too, including one of my favourite additional features I spoke about back in my review of 2016 - the Practice Development Program, whereby you’re not just doing laps for doing laps sake in Practice sessions, you can set up particular tasks, which aid you with additional research points to spend on upgrading your car, making you faster and more competitive to boot. The game looks stunning too, running in 4K, HDR on the One X and with a buttery smooth framerate when racing, a sight that’s marred by the sport’s latest additional safety feature - the Halo. I agree fully with the safety benefits it has to the drivers, but man does it get in the way of your view. But - Codemasters has my back! Kinda... There’s an option to disable the Halo column in the settings, and what you’ll get is the main top part of the Halo device still on the car, but the vertical column that holds it up in front of the steering wheel is removed, meaning you can still maintain at least some of your visibility. Though it didn’t feel quite as good, I ended up running in the TV Pod camera, for the added visibility boost. Given Codemasters has been doing this for so long, the handling of the cars is great, and they sound just like their real life counterparts (Something that still saddens me to this day, since they got rid of the screaming engines of yesteryear). It’s hard to really pick at anything to do with the car handling, or from an audio perspective because they’ve had so long to get it right. Saying that, probably the only thing I could say was even a little bit janky about it is the new scenes with the interviews or speaking to your crew members. Facial animations on human models is something we don’t see a great deal of from Codies, so I’m forgiving that it’s not exactly Hollywood level CGI in that department. What we do get though, is still a believable enough entity to get you through the game and back into the racing. Where it matters.

Overall, F1 2018, despite its similarities to previous iterations in the series, can still hold its own to be another fantastic entry to the series for Codemasters. Another feather in the cap, so to speak.

The latest and greatest F1 game for Codemasters roster, with just enough new about it to make it an update from last years. It’ll be a hard push to see what they do for 2019, that’s for sure, but Codemasters have had a long run with the F1 license, and it doesn’t look like they’re keen to stop anytime soon.