For all of the previous iterations of F1 that I’ve reviewed, I’ve often pondered how the next title in the franchise will improve or what new features will be added. However, this year a sizable chunk of that questioning has been taken up by the new cars. A new aerodynamic profile means that the racing is closer and harder than it has ever been, making for much more exciting racing the likes of which we’ve seen in the real world version of the sport. Codemasters, to their credit, has been hard at work implementing the new cars, along with a significant rework of the underlying physics systems to ensure that the experience is a good one when driving the new model. They’ve also added a long term player request with support for VR but all these changes have come with a price. Notably, this iteration of F1 doesn’t feature anything in the way of a narrated story mode like “Braking Point” from F1 2021. A shame, as I found myself wholly engrossed by the story despite its linearity — and had quietly hoped for more of the same. That said, the improvements to the rest of the title more than make up for the omission of a story. So onwards to those instead.

First and foremost are the new cars, and the tyre and physics models that go with them, arguably being the most important aspect of this year’s title. A significant amount of development time was taken to ensure that they got it right; having raced around the many circuits (more on these later) in F1 22, the cars certainly feel more stable overall, and in practice allowed me to push a bit harder during racing with more confidence. Something of a game changer this year is the inclusion of native VR support, allowing you to virtually don a helmet for the ultimate immersive experience when it comes to F1. What’s most apparent is the sense of speed these cars get to in such a short space of time, something that flatscreen gaming traditionally struggles with when it comes to racing games. Being able to have a look around, check your mirrors, and point yourself to the apex of a turn with more consistency really aids with the lap times.

Most other aspects of the game have been given a bit of a polish up too — both on and off the track. With the recent real-world changes to Australia, Spain, and Abu Dhabi, these have also been reflected in-game, along with season newcomer Miami making its debut in virtual form also. Quite the achievement, given the track wasn’t even finished in the real world until days before the race there, that its inclusion in the game was even possible. There’s also new pit- and safety car-based updates, in which you can move to a “broadcast” mode, that has the game take over control and run you through a pitstop or follow the safety car as if you were watching the race on TV. It’s a great feature for those that don’t want the more technical aspects of driving through the pits, or find they don’t want to have to follow the safety car around the track, but still want to see the race happening live. Track practice in career also gets an upgrade with new programmes to gain points for research and development teams back in the garage. 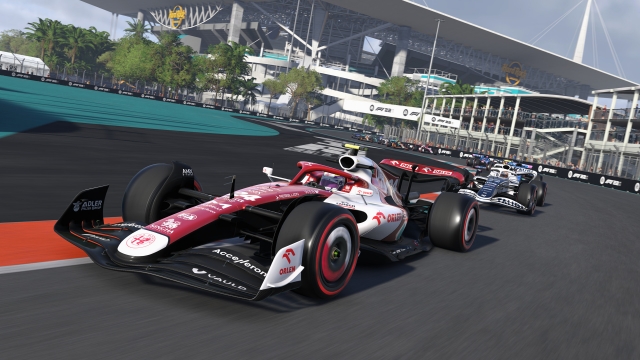 Graphically, the EGO engine still looks as stunning as ever, with tracks raced at night under floodlights still taking the graphical spotlight as it were — the lighting in this engine really is a delight to behold when it comes to this scenario.

The engine noises from the cars are also incredibly detailed, with slight nuances between each team’s engine due to how they’re set up differently from one another and how that noise escapes from the body of the car. Also, whilst you can opt to listen to the brilliant Formula One theme by Brian Tyler, for the first time F1 has a fully licensed soundtrack featuring well known artists like deadmau5, Charli XCX and Diplo, to name a few.

Lastly, the elephant in the room — “F1 Life”. In this you’ll be able to customise your character with various clothes and items for your virtual avatar’s home space, including buying some supercars with which to adorn your space. These supercars also feature in Pirelli Hot Lap events, which have you driving timed laps, autocross through narrow gates, drifting and checkpointing your way to (additional) successes. Before F1 22 launched, there was quite a bit of a stir around these aspects of the game — “will they/won’t they”, and it was seen as a watering down of the core F1 appeal. However, having had some time with the mode, and whilst also noting that some of the customisations are monetised, it can be avoided if you don’t want any part in it and just concentrate on the racing and career aspects. The main idea is to bring yourself more into the headspace of a top F1 driver that happens to have a house large enough to contain multiple supercars within its floorspace. But, whilst you’ll still unlock some cosmetics and grab some supercars throughout normal play, it’s exactly that: cosmetic. There appears to be no gameplay modifying aspects of the feature, leaving it for those of you who like to go head-first into collecting everything a game has to offer.

Overall though, my time so far with F1 22 has been yet another great experience with the franchise and I look forward to my continued time with it.

Although slightly saddened by the omission of a story mode this time around, it’s more than made up for by the new vehicle physics. The concern of “F1 Life” having any bearing on gameplay being quashed makes F1 22 another flying lap for Codemasters.