Licensed games already have something of a bad reputation, even more so if they’re based on an anime or manga. There’s always the expectation that these games have been rushed out to capitalise on the success of an existing series, and the abundance of mediocre arena fighters certainly doesn’t help this stigma. Oddly enough, Fairy Tail follows KILL la KILL -IF in being another anime spinoff that has released years after the main series already ended. Without the need to rush the game’s development to coincide with an ongoing anime series, you’d expect Fairy Tail to feel like a fully complete game that makes good use of its source material. Instead, what we got was an average JRPG and a half-hearted Fairy Tail retelling.

When creating the first major console adaption of an anime or manga property, companies will usually try to make them easy to understand for newcomers. You know, things like starting from the beginning of the series, or at least giving a decent explanation of events leading up to the game’s story. Fairy Tail decides that neither of these options make sense, throwing players midway into the series, right near the end of the Tenrou Island arc. Not only does this skip introductions for most of the main cast, it's just a confusing way to start the game even if you’re familiar with what’s happening. 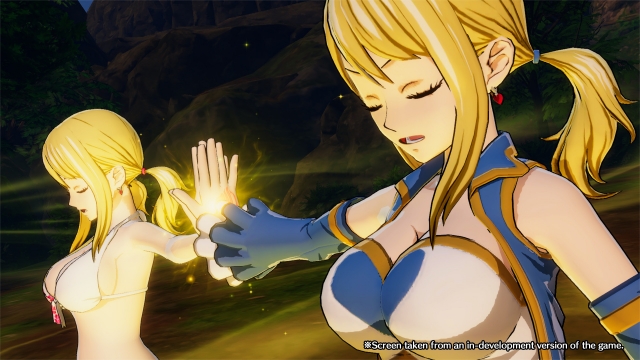 After facing the Tenrou Island arc’s main villain, Hades, Fairy Tail are attacked by the dragon Acnologia. A last ditch effort by the guild causes them, and the island they’re on, to disappear. After seven years, both Fairy Tail and the island reappear, and the guild have to deal with the problems that have arisen during their long disappearance.

It’s essentially the same as the manga, just without any of the buildup or impact. In fact, that’s the best way to summarise this adaptation's story in general. Everything is close to the source material, roughly following events in the same order. And yet, even as someone who hasn’t followed Fairy Tail in years, it’s easy to tell that things aren’t quite the same. Scenes are rushed, certain characters don’t even get 3D models, and there’s even one arc that ends up being relegated to a short summary at the beginning of a chapter. 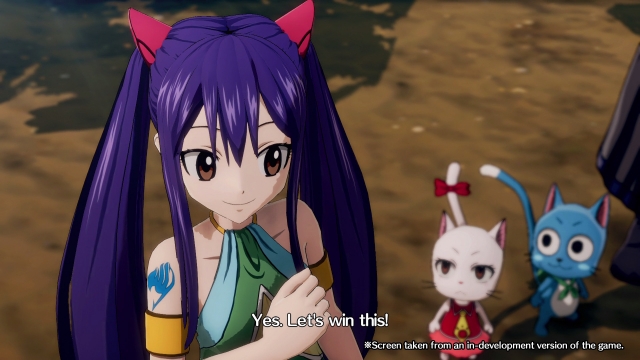 This all leads to the feeling of Fairy Tail being a rushed game, only doing the bare minimum with little thought put into giving the story any impact. It’s so bad that I even went to check what certain scenes were originally like, which made it abundantly clear just how many corners were cut in the game. At the very least, most main story cutscenes are voiced by the same voice actors as the anime. Even then, there are scenes that are completely unvoiced, or ones where certain characters are left silent.

With the story being subpar at best and downright terrible at its worst, the gameplay settles with being simply mediocre. From the guild hall, you can take missions to increase your guild rank, and rake in some much needed money for new stat boosting facilities. From there, you can fast travel to the quest area, complete an easy objective, and then return back to the guild. Most of your time outside of the main story (and even a fair amount during it) is spent going back and forth, finishing quick missions. Nothing outright terrible, though there are only a few mission types that are recycled constantly. 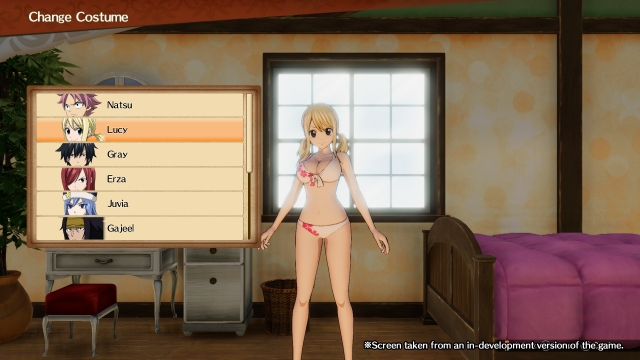 Exploration isn’t particularly interesting either, thanks to how bland areas are. Most are made up of a single map with few distinguishing features. There are only a handful of areas in the entire game as well, so you’ll be going back though the same places many, many times. It’s even worse if you plan on doing all the sidequests, as that just means more treks through areas you had become tired of hours ago.

As for what you do during most missions, outside of talking to the occasional NPC or gathering items, you’ll generally just be fighting groups of enemies. Said enemies will be constantly recoloured and made into ‘new’ enemies, even more so that a typical JRPG. That aside, combat is… fine. You can take up to five party members with you — making good use of the large number of characters you can recruit — and battles take place in a fairly standard turn-based affair. Enemies are placed in different squares of the arena, and attacks will have different areas of effect, but for the most part you can just spam your strongest moves to win. 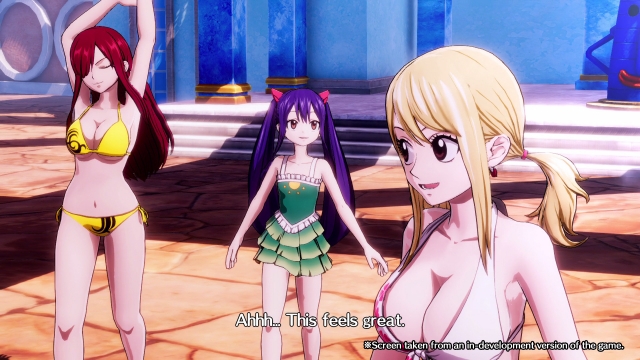 It really isn’t anything special, getting the job done with little flair. Attack animations are long — but can at least be skipped — there’s next to no enemy variety, and most characters just end up doing the same thing, just with different elemental properties on their moves. If you were trying to introduce a Fairy Tail fan to JRPGs then this might not be so bad, otherwise you’ve probably played ones with more interesting gameplay.

All of this is presented using some ugly visuals. Despite the grievances I have with the manga’s art at times, the difference in quality between it and the game visually is almost night and day. Character models aren’t too bad, outside of the repeated and uninspired enemy designs. It’s the animations that are the main problem, often making characters look stiff and lifeless. Oddly enough, attack animations end up being faithful recreations of ones used in the manga; they’re so much better than anything else used in the game. I guess the developers thought so too, as attack animations are ripped straight from battles and used in cutscenes with little to no changes.

Fairy Tail is a rushed spinoff that rarely has an ounce of the energy shown in its source material. It’s more ambitious than many other anime games, but the execution is severely lacking. So much so that, if Fairy Tail was just another cookie-cutter arena fighter instead, it probably would have been a better game.