If you’ve ever been prowling through the jungle, scouting out an enemy encampment, readying your weaponry and making sure you have enough drugs should things go sour. If you've ever found yourself ready to take down a lone straggler, only to have a tiger maul you from behind, not only revealing your position to the entire encampment of enemies you’ve spent several minutes marking but also to the other mean cats in the area. If you have ever found yourself in this situation, then I’m sure you’ll be about to empathise with Jason Brody’s struggle to reclaim his friends in Far Cry 3.

Jason Brody is used to a certain level of comfort and pampering until, whilst on vacation with three of his friends and his two brothers, he is captured by pirates after a skydiving experience goes awry. Hands bound and locked in a cage, you are introduced to Vaas, the lord of pirates on this tropical island. This initial meeting doesn’t last more than about five minutes but it’s easy to tell that the characters have evolved substantially from it’s predecessor. I could feel Jason’s fear and anguish. I could feel the calculated crazy that was seeping out of every pour on Vaas’ body and I was scared for Jason. Remember, this is no more than five minutes into the game and I am already attached to the characters. Jason then manages to escape his cell and into the jungle and from here, you embark on an experience of mental adjustment where Jason Brody finds his feet firmly placed within the Rakyat tribe, the island’s natives who feel the pain of the pirates just as much as he. 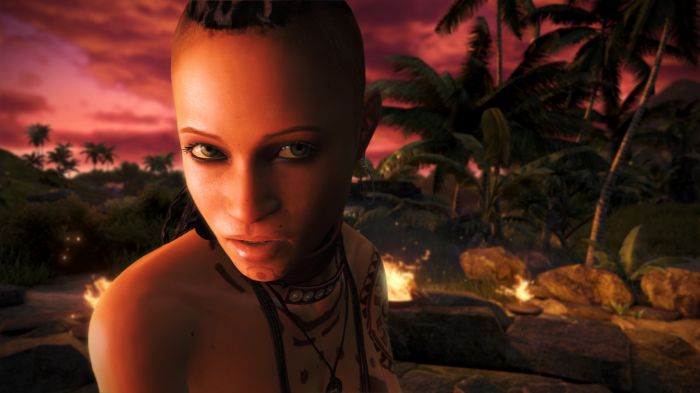 Everybody that you meet and talk to within Far Cry 3 seems like they belong here. I know this may be a bit of an obvious statement but if compared to it’s predecessor, I felt that a lot of the characters in that just didn’t fit. They had been placed there to make a story line work or bring a certain feel to the story but here every character, whether they be significant to the story or not, has a personality and a story. Some stories are told and some are inferred but it wasn’t long before I felt a connection to every one of them through the eyes of Jason Brody. I felt like I needed to not only retrieve my friends and family but help out these people as well.

How you go about this task is entirely up to you. You can help the natives and complete tasks for them, race through the story and complete your own mission or just aimlessly walk through the luscious landscape taking in the view. That is the beauty of Far Cry 3; you can do everything at the pace that you like. I spent countless hours roaming the forest with a bow in my hand and taking out animals for their skin to enhance my equipment before even bothering with the main story. That was my prerogative, but may not necessarily be yours. 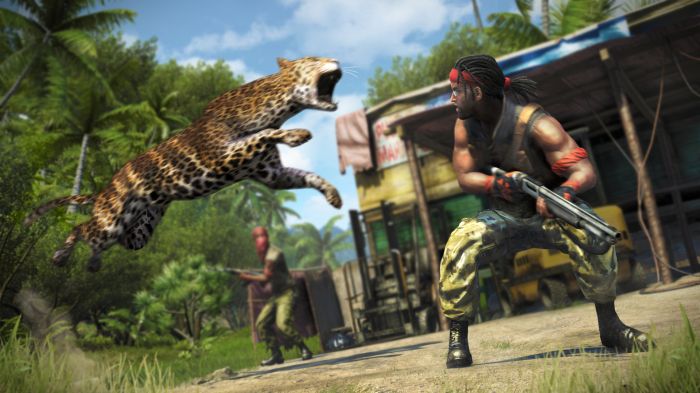 The animals on this island roam and thrive entirely independently from the main narrative. Not only do they not care if you’re currently on a mission but they don’t care which side you fight for, if you’re in their territory, you’re fair game. You can use them to your advantage by luring them into an encampment of pirates or they can be a large hindrance by attacking your from behind as you sneakily take out your enemy. Either way, they are largely unpredictable and a force to be reckoned with. Often, other less aggressive animals will warn you of an incoming predator for instance, a herd of deer could canter across the road or a drove of pigs could start to squeal within the bushes which can give you a headstart on getting out of the way or a way of tracking them for their hide.

As aforementioned, by taking out animals you can skin them and use the hide to enhance your equipment such as a increasing the size of your wallet or making a larger quiver for arrows. I maxed out the majority of my equipment before I was even a quarter of the way through the story and this meant that I had the best gear to play around with for the entire rest of the game, rather than having basic equipment to start with and then getting it given as I progressed through the story. This only enhanced my feeling of independence within Far Cry 3 and made me love it even more! 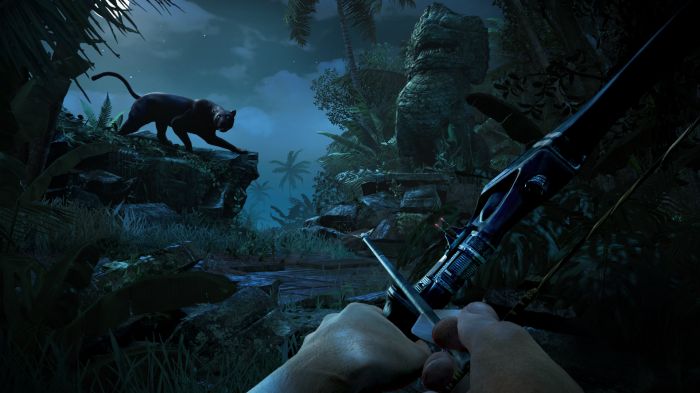 Not only can you increase your equipment but you can increase your arsenal and abilities. As you complete missions, side quests and take out pirates, you will gain experience (XP) points. This XP will help you to increase your level and with every level, you can acquire new skills in three different skill trees. You can increase your scout-type abilities (movement and reload speed, increased aim etc.) in the Heron section, your aggressive abilities (advanced healing and combat etc.) in the Shark section and more stealthy and resourceful skills (fast reloads and more loot from animals and plants) in the Spider section. Tailoring your skill trees to how you play is important as it will aid you in survival, there’s no point in getting increased bullet damage if you’re going to do nothing but takedowns (the ability to take out an enemy silently with your knife). 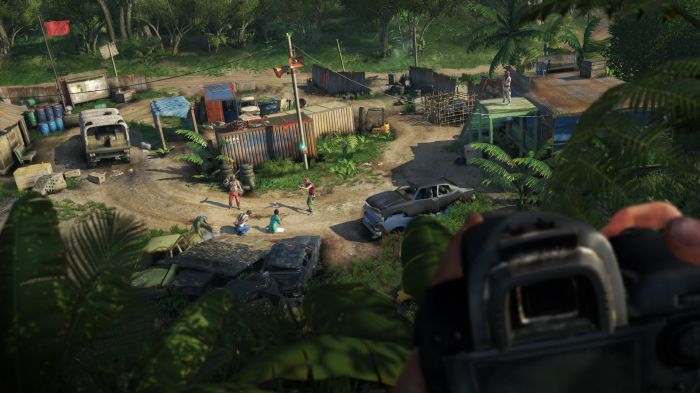 Your arsenal consists of 39 different weapons which can be unlocked in two ways. You can either buy them straight out at any vendor for cash or, my preferred method, you can travel around the map to different radio towers, scale them and disable them. These are never that difficult and just consist of climbing stairs, ladders and jumping onto ledges. Once you disable them, you get an Assassin’s Creed-esk panoramic view of the surrounding area and points of interest. Different radio towers will unlock different weapons but that’s not where it ends. Once you have acquired a weapon, you can equip it at shops/automated gun shops (cabinets found near fast-travel locations usually) and then you can customise it with different add-ons such as red dot sights, increased magazine size or suppressors. You can also add a custom paintjob to the weapon if you so desire as well. Again, the weapons you choose (you can hold up to four when you have the largest bag) will tailor how you play the game and allow for a lot of independence.

Along with the different animals, weapons, skills and medicines, you can travel around the island in your desired way. You can walk but I’m telling you now, it’s a big ol’ island and it will take you a lifetime, you can drive in a few variations of car or quad bike, you can sail on boats or jet skis or you can fly with the hang glider. The latter is my favorite but I’m a fool for scenery. Speaking of scenery, the landscape is breathtaking. The detail that has gone into not only the characters, the weaponry, the vehicles and the animals but also the plants, the buildings and the distant hills. I spent a long time try to get to very high points (usually radio towers) so I could sit and look at the beauty that is Far Cry 3.

In games these days, it’s not enough to play alone, most people will like a bit of multiplayer and Far Cry 3 does offer this albeit disappointing. I was quite excited to try out the multiplayer but after a few games, I realised that the landscapes were all pretty much the same. A slight alteration on a temple or jungle but nothing too awe inspiring. There is also a co-op mode which, prior to release looked quite in-depth and exciting but the missions are very objective based and uninspiring. Take a bomb here, move a train there, you know the drill. However, Far Cry 3’s map editor is the Mona Lisa of multiplayer which allows players to create their own maps for them and their friends (and anybody else) can run and gun on. 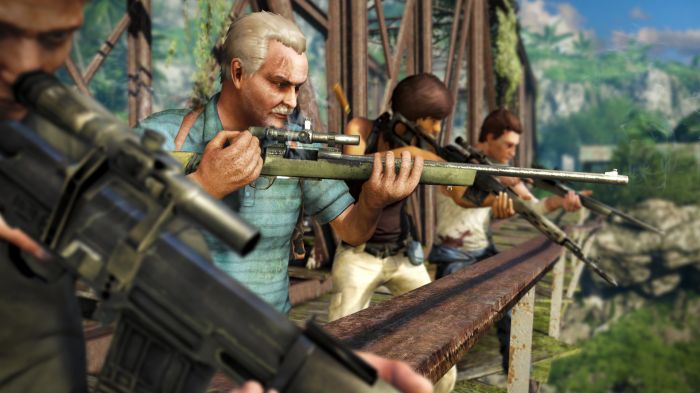 Although the multiplayer is a bit of a let down, I think that the single player more than makes up for this and it’s a nice change to see after so many other franchises tend to focus more of the multiplayer aspect, leaving the story short and unentertaining. Far Cry 3 is far from this and will keep any gamer gripped for hours as you battle through the jungle, fighting off pirates and animals alike desperately trying to free your friends from their grasps as Jason Brody evolves into a tailored killing machine.

If you’ve ever been prowling through the jungle, scouting out an enemy encampment, readying your weaponry and making sure you have enough drugs should things go sour.

Good review there mate, though there are negatives I would add, the money system in the game, pointless, once you have done all the radio towers all the guns are free, and once you max out the bandage skills medicines become pointless, bandages are unlimited and work better than the injections when maxed out.

Good review there mate, though there are negatives I would add, the money system in the game, pointless, once you have done all the radio towers all the guns are free, and once you max out the bandage skills medicines become pointless, bandages are unlimited and work better than the injections when maxed out.

True, but still, you can buy out the different maps and customise your weapons etc. But yes, I agree.
Reply

This clearly went down better than the Far Cry 2 review. OT: I really still want to get this. It's cheap-ish with the sales just now. Tempted.

Getting this for crimbo, looking forward to it :D.......in the mean-time, playing the much debated game warz .

This clearly went down better than the Far Cry 2 review. OT: I really still want to get this. It's cheap-ish with the sales just now. Tempted.

Haha, yes. Avid gamers tend to not like my reviews. Wait for the end of the sales, see if it comes down more. It's only 12% off.

Getting this for crimbo, looking forward to it :D.......in the mean-time, playing the much debated game warz .

Very good game. I played a bit of the war z earlier. It's got a lot more zombies than I remember. I'm going to need a team to survive.
Reply

Jut picked this up for £25 pound and only 30 minutes in and loving it.

Jut picked this up for £25 pound and only 30 minutes in and loving it.

It is a great game and well worth the cash.
Reply

I'm 50 hours into the SP and feel like there is loads left to do. Haven't even touched co-op or multiplayer yet.

You want to know how good Far Cry 3 is... There is one way to tell its possibly the best game in the last 5 years... I PAID MONEY FOR IT!

I PAID MONEY FOR IT!

Played about 2hrs, not touched it since, dunno if a combination of too many games to play at moment and not enough time. What I need is a LAN.....to give me some spare time and sit festering at my pc just playing games. :D