This is a title that I had quite a bit of trouble getting very far in. Let me be clear, Feral Fury is not a difficult game, it is just a very punishing game. The main gameplay loop of Feral Fury is actually quite simple and doesn’t require great amounts of skill to play. Realistically, all the player has to do is start a run, shoot some bad guys, work through as many stages as possible, collect as many orbs as possible, and not die. That last one has to be the hardest part because everything is out to get you and even the environment has no issue with blowing you to bits. The best way to describe this title is take The Binding of Isaac, take out all the religious content, add pandas, add explosions, and then add more explosions. What you have after all this is Feral Fury, a twin-stick shooter with an interesting gameplay loop that pulls players in.

Like I said, this game is very similar to The Binding of Isaac and this is most seen in how the player interacts with the stages they find themselves in. Using one stick to run around while using the other to shoot at baddies, gameplay should feel relatively familiar and easy to understand. This part of the gameplay is responsive and works well enough. Gameplay simplicity is nearly required however, since the levels are procedurally generated and the enemies are very dangerous the moment the player encounters any of them. Luckily, there are many different ways to take enemies out, including additional guns, bombs, helpers, special effects, environmental dangers, and even a car with a mounted gun. Although, the segments that use the car are only available at certain times and I can’t give too many details as I’m not very good at them. 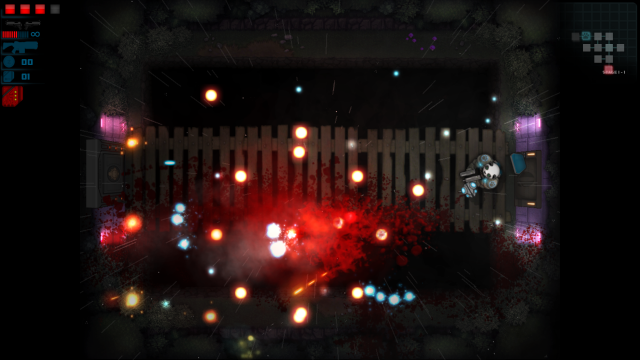 What I am good at though, is exploring. Every time I load up this game, I try to search every room and collect everything I find. Sometimes, this is good and gives me bonuses that make my future fights easier. More often than not, I end up with a curse that gives my enemies more HP or I get hit too many times and have less health than I like to start the next stage or I find something I can’t even make use of. Whether it be a store that I don’t have the money for (or the keycard to open it), a syringe room that will permanently lower my health to boost my other stats, or just a hidden room I don’t have the explosives to open, there are plenty of times I had to walk away from bonuses for various reasons. Most of the time, it comes down to how many enemies I need to defeat to get through the stage, as there are many different types that attack the player in several different ways. I was surprised by the variety of enemies and look forward to finding even more in the future.

Since the game has sharp, clean visuals, it is fairly easy to identify the many different enemies without spending time looking for little differences. Even though the game is viewed from a top-down perspective, everything has enough of polish and definition to be satisfying to watch. This applies to the various effects as well, including explosions, blood splatter, and fire. Not only are these occurrences brilliant to look at, they sound wonderful as well. It’s a good thing these look and sound so good since it feels like Feral Fury is made up of fifty percent gore, forty percent explosions, and about ten percent pandas. Oh, did I not mention that? Yes, your character is a panda, wearing Gears of War-esque armor, shooting giant guns, and blowing up everything that doesn’t get shot. I am not sure why you play as a panda, but I actually kind of love it. 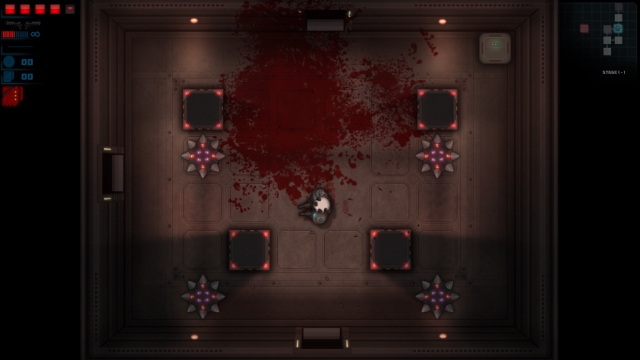 Although I really enjoy the pandas, my favorite part of Feral Fury (and the main difference between this game and The Binding of Isaac) has to be how you earn orbs with every run you complete. These orbs are used to buy upgrades that persist from run to run. Some of these include starting with different items, improving the effectiveness of items you encounter in future runs, and making your dodge roll more effective. Having persistent boosts between runs and using temporary boosts found throughout the stages can make your character very powerful. This will be necessary because the game’s bosses are basically like all the other enemies, spewing tons of bullets and explosions to avoid while sponging up tons and tons of your shots. I wish I could say more about the bosses, but I could only get to the first one as I’m just not good enough to get to all of them.

Unlike The Binding of Isaac, the bosses in Feral Fury seem to always be the same, although, I could have just not fought them enough to see them change. Either way, shooting and killing enemies feels satisfying no matter who they are. The most satisfying kill I had was when I got an effect that allowed me to kill an enemy in one shot after killing enough baddies to charge the ability. I made sure to save this until I got to the boss and was allowed to kill it with a single bullet. Upgrades and abilities like this were what made my time with this game so much fun. The only issues I really had with this title was that the environment was more dangerous than many of the enemies, how long runs could take, and how one of the upgrades I bought didn’t seem to work after a run or two. Other than that, I was pleasantly surprised by Feral Fury and would recommend it to any fans of the gameplay of The Binding of Isaac.

Running and gunning, exploration, big bosses, upgrades and tons of deaths makes this game mostly enjoyable throughout many runs. While not improving on The Binding of Isaac's gameplay, Feral Fury does a good job of good enough replacement that can stand on its own if given the chance.