“Graphic adventures are a thing of the past!”, some may say, “shooters are what now rocks!”. They might not be the hottest genre at the moment, but they certainly have a niche. Although they don’t get you all fired up with adrenaline, graphic adventures are more eloquent when telling stories, although not necessarily due to the complexity of its narrative. Among titles filled with drama and action, it is refreshing to encounter a game with such a light-hearted approach and sense of humour. Monkey Island was one of the best comedies I’ve played, and probably so is Fire, a game set in the Stone Age about a caveman in a search for fire. Regrettably, comedy is a genre that is rarely explored in videogames (maybe this is why my standards for videogame comedies is not so high…), and although games like GTA V or The Sims have a clear ironic and comedic undertone, they are hardly played for the laughs and giggles. Well, in honour of Fire, I’ve prepared a flammable piece full of references to the game, so switch on your pun counters and let’s rock on!

Fire is a point-and-click adventure, like The Longest Journey or the aforementioned Monkey Island, but unlike these games, it barely gives any weight to the narrative. In this game, the narrative is purely contextual, to the point that each level, each with its own particular scenery, has little continuity with the next one. Our protagonist, the hearty Neanderthal Ungh, is expelled from his home tribe, and as anyone would, he adventures into the Neolithic wilderness. The beginning is a bit of a rocky start: we help Ungh get hold of a sinful-looking apple, which after being eaten makes him trip balls. This blazes a trail on which he must catch funny-looking fireflies that warp him into each next world. From here on, every level is a colourful, charismatic and witty stage, with dinosaur-like creatures, silly interactions and sarcastic references to modern day lifestyle, pop culture and videogames. Fire is completely self-aware of its situation as the type of videogame it is, and approaches it with an ironic, superlative and often childish sense of humour.

One of the main game's selling points is the lack of any spoken dialogue or text, and rightly so. It is true that Fire's mutism doesn't deliver a deep and intricate narrative; Fire sparkles because it doesn't need much background or exposition to provide a holistic experience of the humorous tone in its world. From the visuals, to the animations, to every sound, everything feels goofy, ludicrous and whimsical. The overly cartoonish visual style screams not to be taken seriously, and so do the puzzles. The overcooked animated expressions and the colourful and simplistic obvious visual cues make up for the lack of dialogue. Even the music is bopping and catchy, and characters even react to it sometimes! Every animation is accompanied with a funny noise, perfectly fitting for the cartoon-style game this is. All caricaturised characters, whether human (Neanderthal, actually) or animal, have some childishly repulsive appearance. However, this just adds fuel to what Fire is, as the visual shock is solely a warm-up for what’s to come. 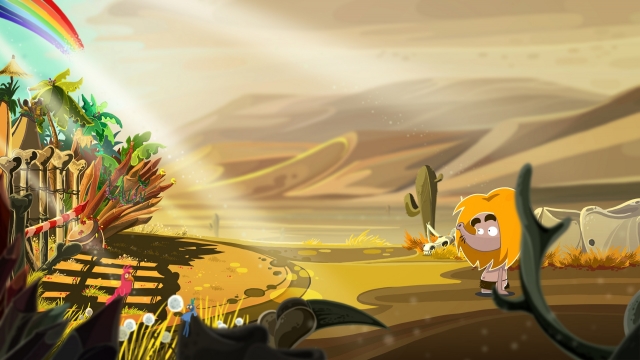 Fire’s mechanics may indeed be a bit antiquated, near prehistoric, but there must be a reason for them surviving this long. As they say, ‘where there’s smoke, there’s fire’, and the truth is that the slow-paced, thoughtful and in many cases, trial-and-error gameplay makes the player sink in the overall theme of the puzzles and game. Guesswork is inherent to many of these games, but since in Fire there are not many possibilities available, your guess is usually right. The outcome of a game is not narrative, as I’ve mentioned, but more of a silly joke or a pun that will put a smile on your face. Puzzles should be stepping stones for what point-and-click adventures intend to convey and a proof that they’re still able to find their audience, and Fire nails it on this one.

As with any graphic adventure, Fire is filled with puzzles. In some other review I have briefly discussed how important it is to not frustrate the player with illogical solutions to the puzzles, or at least give the player enough information to solve them. Contrary to Decay: The Mare, the puzzles in Fire don't follow a logic that you can relate to the real world. Its logic only makes sense within its world, getting into the daft, playful and silly mindset that Fire's own universe evokes. They become more difficult as your progress, but still retaining the same spark. What's more, they match the level's particular theme: the space level will make you play Space Invaders, for instance. In that sense, the game conveys mechanically accordingly with the visuals, sound and theme. In some cases, the themes become a pick n' mix of different topics to treat sarcastically, without much coherence in continuity. From space exploration, to female tropes, Fire has always a funny commentary on it. Admittedly, it's usually not very deeply explored, but this game doesn't take itself seriously enough for a thoughtful overt commentary.

As I have explained, mechanics flow brilliantly... until the final level. The last level's puzzles cave in to feel dissonant, anticlimactic and disconnected with respect to the rest of the game. Every single level before then is different from each other, and requires a new different kind of thinking to solve the puzzles in them: there is one based on music, one about time travel, or one involving QR codes... They all feel fresh and are just difficult enough to make you think and appreciate the quirks and perks of each scenery, but easy enough to fit into the childish and cartoonish style of the game. However, the last level is an amalgamation of a bunch of puzzles used previously, that requires zero effort and minimal time. I understand the devs' decision—probably taken in the heat of the moment—intended to test the abilities that the player learnt throughout the game, but it feels like a lazy solution for a game that never fell into monotony and surprised you around every corner. Despite having the perfect ending's location for the game's slow thematic build-up—a volcano—, the puzzles in the final level feel unoriginally rehashed and turn out to be utterly disappointing. All in all, with its childish humour and ironclad wit, Fire is bound to brighten up your day. I can’t help to be in between a rock and a hard place when giving it a score; even though it does have a few flaws, it does almost everything blazingly well! However, there is nothing here we haven’t seen yet, as polished as it may be. Perhaps, the reason why I cannot criticise this game harshly is because it doesn’t aim to meet overly intellectual and artistic goals. Fire is simple, family-friendly and playful. Fire won’t make you think deeply about its jokes and puns. They’re overt, but not serious; nothing in this game is serious. Yes, it is point-and-click, and they may be a bit stuck with their mechanics, but Fire is proof that they haven’t gone down in flames just yet.

Cartoonish and ingenious, Fire will make you crack up more than once. Although it falls short when trying to have some deep commentary, good fun and engaging puzzles make up for it.