Firewatch was not the game I thought it was going to be. I imagined something akin to The Long Dark, but with sunlight. Boy, was I wrong.

The developers, Campo Santo, are a new studio based in San Francisco, and have built a team of experienced designers and programmers. The director and the writer for Firewatch worked together to lead the team that produced the first season of Telltale’s The Walking Dead, and lead artist Jane Ng used to work for Double Fine. This can be seen throughout Firewatch’s visual style that feels similar to the games of those two companies; the protagonist Henry’s character design reminding me of Eddie Riggs of Brütal Legend, and a world drawn like a cross between Telltale’s graphic novel style and the animated film Wreck-It Ralph, but with artist Olly Moss’ influence clear also.

Instead of being a survival simulator like The Long Dark, which too had a similar soft, watercolour art direction, Firewatch is most similar to Gone Home. The debate over whether Firewatch is or isn’t a game will be unavoidable, and gives you that same sense of being in a real space and of moving through it. When you arrive at the Yellowstone National Park, all you have is a paper map and a compass, and you have to follow the many dirt paths to gain a grasp on your surroundings. 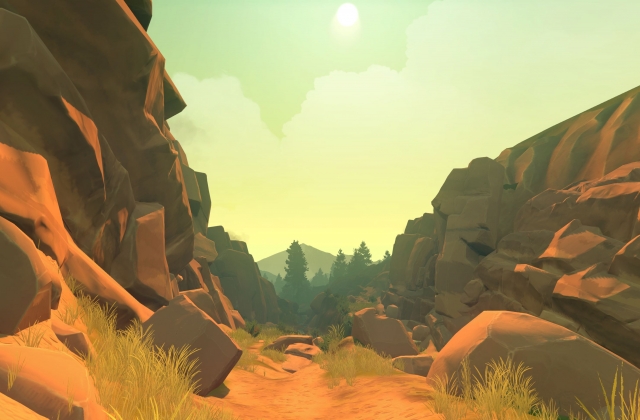 You aren’t given any markers on the screen to show you where exactly you’re heading to, and there’s no mile counter ticking down as you traverse the forest. You are given objectives, that will be marked on your physical map, but you have to find the way there. I often found myself stopping to look for landmarks, and slowly but surely I began to memorise the many highways and byways of this untamed place.

This recreation of an 80s Yellowstone is made up of distinct meadows, canyons, and groves, and holds a natural beauty despite it’s unnatural, painterly form. As someone who enjoys hiking personally, I had no qualms with spending time strolling alongside the rivers and amongst the trees. At intervals throughout the story, Chris Remo’s wonderful score is used to punctuate the arrival at a new location, or just to emphasise the significance of a scene, just as in Gone Home, for which he composed, furthering the feeling of connection between the two.

Early in the story, you find an abandoned Kodak disposable camera. I’ve never been keen on photography, but as I was exploring, I would often stop to admire the landscape. Being able to save these moments is a remarkable idea, and those who take the time to use the camera are rewarded in the end. 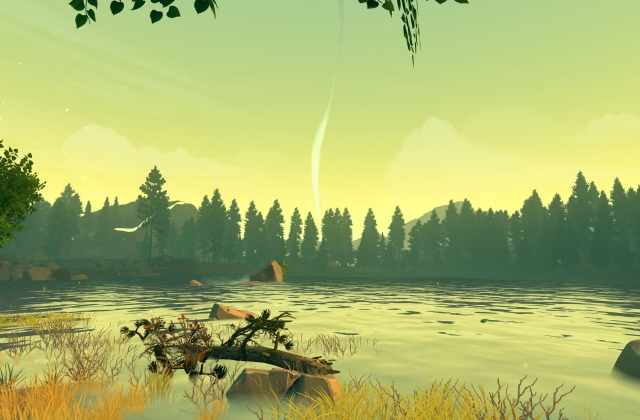 The story takes place over two and a half months, and you play the odd day during that time period. As a fire lookout, Henry spends most of his time in his tower, observing the horizon for signs of smoke, and for anyone ignoring regulations and letting off fireworks. His only point of contact is his boss over in another tower to the north. Delilah, and the relationship you build with her, is what drives this game.

As part of the job, you’re given a radio transceiver with which you can speak to Delilah. Dialogue responses are offered in a list, with a short amount of time to answer, or she can be ignored, ending the conversation. You won’t want to do that. The acting of the two leads is full of chemistry, and feels authentic. Responses you make won’t just affect your current conversation, as each will build your Henry’s backstory. The dialogue all leads down to one event in the end, but your decisions are meaningful for the shaping of your relationship.

And you will want to build that relationship. Like how most players became immediately attached to Clementine in Telltale’s The Walking Dead, and wanted to protect her, I felt the same way towards Delilah. The two leads are in their late 30s and early 40s, and this more adult connection had more of impact on me than that of a man and a child, as I'm not exactly the fatherly type. Feeling alone and having just that one person on the other end of the phone is an experience I've lived with before. 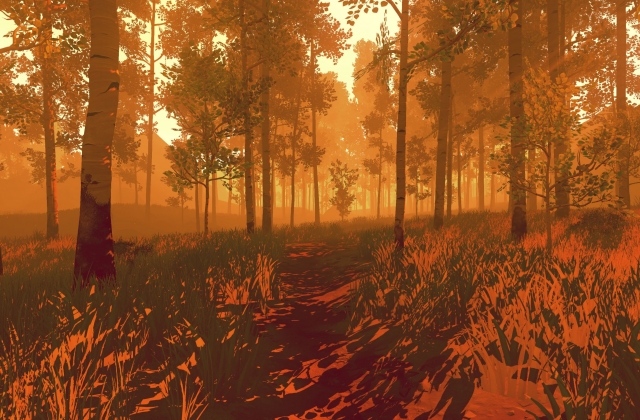 A mystery grows as strange noises are heard and discoveries are made in Henry’s first days in the park, and with Delilah, you investigate and search for the secrets hidden in the wilderness: a dark figure is seen lingering amongst the rocks, a pair of campers vanish, and on returning to your tower you find your window smashed in. This is only in the first week.

While exploring, you will come across equipment that you use to traverse different terrain: ropes can be used to scale sheer cliffs, a flashlight for searching caves, and an axe to clear overgrown bushes. The world is dotted with points that require these items, but the narrative never drives you into a dead end without the item you need to get through it. I never found myself struggling to traverse having missed something, as you’re always led down paths you can follow.

The world is worth exploring too. While the game doesn’t hide collectibles in the traditional sense, some discoveries you make can be reported to Delilah. Many times she’ll respond with more than just an acknowledgement, usually with some sort of joke or comment that you choose how to respond to. You won’t just see more of the world, but more sides of the characters too. 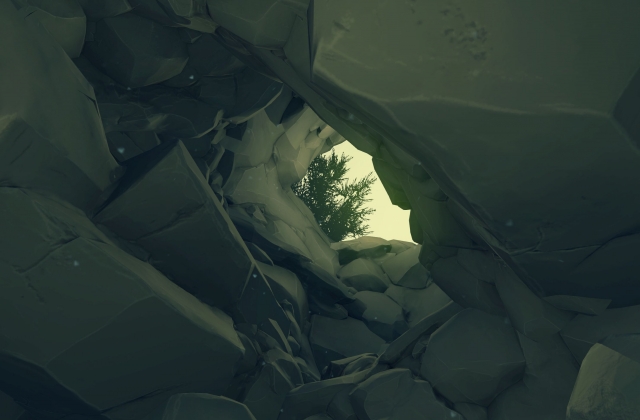 I’ve tried my best not to include any spoilers for the plot in this review, as going in blind was massive for me. A game carried by its story can be broken if you go in knowing too much. My advice would be to avoid reading too much about Firewatch, and pick it up soon. A budget-priced digital game, and only about three hours long, it’s perfect for losing an evening or a weekend to.

Ultimately, Firewatch is a game about relationships, and it tore me apart. Building Henry’s backstory myself made me connect to him more so than I have to other characters in recent memory. I wanted nothing more than for him to be happy. Firewatch becomes an introspective journey into love and commitment and is a game very much worthy of your time. The first truly “must play” of 2016.

An industry supergroup brings together their experience to tell an engaging narrative in a beautiful world. Firewatch explores love and commitment through two of the most authentic videogame characters I've seen. A simply wonderful game.

I'm really excited for this - pre-ordered it last week so I didn't forget. Glad to see you enjoyed it so much!

Sounds right up my street, will be purchasing for sure.

I'm still unsure. Sounds like an amazing game, but kinda tense. If the spoilers are that "There's a bloody zombie!", then I'll cry...

Oh yes, ever since seeing the reveal of this I've been into this.