The world of racing games is an interesting one to say the least. You have the usual suspects of Forza, Gran Truismo and, to a lesser degree, the Nascar series. However, when one departs from the classic race to the finish first formula, there’s an incredibly wide variety of different titles to choose from. One such formula are the high octane, action racers that have been a standard of the genre for quite some time. Racers such as Burnout Paradise, Need for Speed and, of course, FlatOut.

So where does FlatOut 4 fall on the spectrum of high octane? Quite high I’m happy to say. Fans of the FlatOut series will not be disappointed with the latest installment and the features that it offers. The amount of content in-game is absolutely nuts, with a large selection of modes and vehicles to choose and use. Modes such as arena battle, career mode, time trial, destruct-a-thons, and my personal favourite, stunts. The stunts that the player is presented with are, not only entertaining, but weirdly engaging. Especially considering that the types of stunts available include car beer pong and a variation on the high jump. Both of these are achieved by launching yourself out of your car at high speeds which, in a very cathartic way, really never stops being humorous. Stunts and other modes are unlocked by gaining points in the aforementioned challenges which, thus, leads to crazier and hectic-er modes… yes, hectic-er.

In terms of actually racing though, FlatOut 4 is more of the same niches that racing titles offer overall. With that being said, the game does differentiate just enough of the gameplay to not have it fall into an endless rut of “win the race, go to next series”. Don’t get me wrong, you still have to win the race, but while racing you can also eliminate other drivers and destroy large portions of the environment as well. This is presumably to vent any form of frustration that is accumulated by racers trying to eliminate you as well. Basically, the core of FlatOut 4 is that you’re here for the destruction, to smash cars and see pieces of debris flying around the course as you realise that fence you just ran through wasn’t going to stop you, so now here comes Mr. Wall. 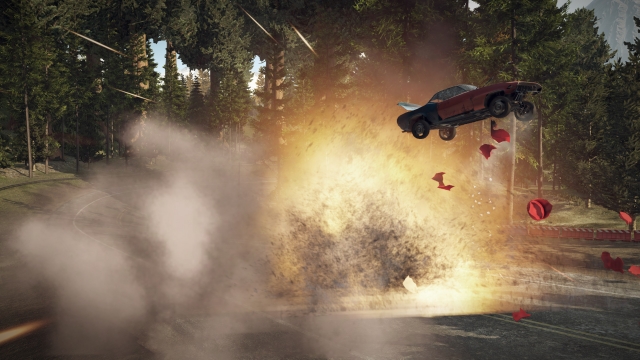 I will mention that, funnily enough, the game became most entertaining for me when I wasn’t winning. The games features sort of put it in an awkward position because most of the perks you receive, such as nitrous, are more quickly earned when hitting other vehicles. This does put a bit of a damper on strategy when trying to place first overall. Sure, you could hold a lead for the majority of a race, but there is always a chance the rival racers will sneak up and speed right past with the boosts they’ve accumulated. I’d be lying if I said this didn’t make the game more intriguing though, the choice is always on the player to either hang back, or try to hang on for the win.

All in all, I definitely recommend FlatOut 4: Total Insanity. A racing title that doesn’t take itself too seriously. This is a game that can dish out some real fun times. Plus, with the added benefit of multiplayer, you can share in the chaos with a friend as you try and take out the competition. So if you have the time and cash, you should flat out pick up FlatOut 4.

FlatOut 4 is a well-made and well-presented racing game that does a lot to escape the level of 'mediocre' that falls among other racers. With modes like beer pong, survival and time trail to choose from, FlatOut 4 is a great experience from start to finish.

Bigben Showcase The Next FlatOut's Insanity In New Trailer