Bizarrely, there are people out there that can’t stand football (I know!) and find it confusing just how much us football fans get so worked up ‘over a game’. The way we immerse ourselves in the game has intensified as media influence grows, fans’ scrutiny is plastered all over social media, and the demands on our managers become ever greater. The Football Manager series has always done a stellar job of replicating the most unforgiving job in football, but this year, FM17 excels in thrusting players into the true demands of being a football manager.

In terms of presentation, Football Manager 2017 isn’t too dissimilar from its predecessor. The UI is as accessible as ever, with minimal changes to a working formula. One noteworthy change within the main hub is the size of the writing in your inbox, and another noteworthy point is how fast the game loads up and runs smoother and it is 64bit compatible this year - which it was not in Football Manager 2016. In Football Manager 2016, there were instances where the pre-match preparations took ages to load, but I have encountered no such issues this year. In last year’s game we saw the introduction of creating a manager’s face model. It was a good idea in theory, but it lacked realism and you couldn’t really recognise your manager from the touchline. However, in Football Manager 2017 you can now generate a 3D manager model by uploading your own photo - and the results are hugely impressive. Once your face is uploaded, you can choose from different hairstyles, body sizes and hair colour - as well as a multitude of different attires to really make your manager stand out from the rest. As if that wasn’t enough, your created manager appears on the home screen of the game, which really adds a sense of authenticity and realism to Football Manager 2017.

The online career mode is as good as ever. You can now subscribe to managers and teams within the social feed, so you can keep a close eye on your mate’s transfer dealings to swoop in with an eleventh hour bid of your own. The concept of the online multiplayer is brilliant, and with little or no shortcomings in the gameplay, it’s conducive to spending a lazy day on Football Manager. Also, the popular Draft has returned in this year’s game. This mode is an online feature in which players create a team and take it in turns to select real-life players within a limited budget. Up to 12 players can be supported, but sometimes the less players there are, the better the overall experience tends to be. I sometimes question how Football Manager can continue to redefine and redesign their series, but every year I am left impressed by the multitude of small tweaks and innovative additions that drive the series on to greater heights. I like how your press officer will forward emails to your inbox if they believe it requires your attention. But, perhaps my favourite new feature in the game is the social feed. This is easily accessible to view on the main hub on, and it gives you the chance to see how your fans feeling about all things relating to your club. I briefly outlined earlier how the demands and pressures are being replicated greater on FM17, and the social feed is the main reason for that.

Football supporters can be very fickle, whether we like to admit it or not. How often do fans write a player off after a couple of bad performances, and how often do fans criticise a manager because we disagree with their transfer dealings? That is what the social feed is; a glimpse into the mentality of a football supporter. One of my new signings bagged a hat-trick in a 4-2 victory, and while many supporters lavished praise on him, one supporter believed he was being overhyped. People do say football is a game of opinions! 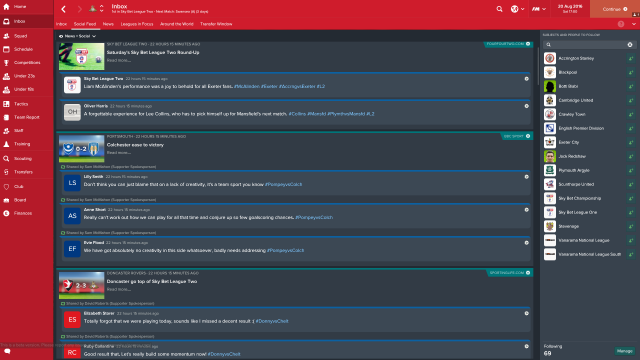 As we all know, the bread and butter of any football game is what goes down on the pitch in those 90 minutes. FM17 has seen another revamp of its in-game 3D match engine. Before the game kicks off, you will see the players leaving the tunnel readying themselves for the pre-match formalities, the two managers shaking hands, and a camera panning around the supporters in the stands. The stadiums and their surrounding areas really are wonderfully designed, with each stadium feeling different to the last.

During the game itself, players should immediately be drawn to the superb new visuals on display. The players, lighting and pitch are gloriously reproduced, with everything having a really well-polished finish to it. There are a couple of new camera angles, with new angles behind the goal for corner kicks, and behind the ball shots of free-kicks in dangerous positions. Goalkeeper animations are much improved from last year, and seeing a striker place a shot beyond one brings a greater sense of enjoyment because of the improved quality. There are still gripes with the defensive balance of the game, as I have found clean sheets really hard to come by. But I have noticed that spending longer on match tactics has often led to a more solid display from my team. The in-game is very impressive then, but what about the pre and post-match information? If you have a Data Analyst in your club, they will come to you before a game with your next opponent and give you a very impressive breakdown of how to approach the game. They will suggest a formation to play, and pre-match you can see a heat map of where your opposition like to play football. For instance, I was due to play against a team from a higher division in the cup and they attacked mostly through the middle. As a result, I adjusted by defending much deeper and narrower. From there, I instructed the players to play more direct and stick to their positions. Coming out of that game with a 1-0 away victory felt hugely gratifying, because I had responded to my analyst and reacted accordingly.

And if the realism of the gameplay wasn’t enough, this year’s Football Manager has brought politics into football. That’s right! In a bold and adventurous move, Football Manager 2017 will simulate Brexit. At some point within two and ten years of your save, you will be notified of Britain’s decision to leave the European Union and that trade negotiations will begin. There are three main scenarios on offer. One is a Soft Brexit, whereby the free movement of players won’t be affected. Another scenario is that footballers are granted special exemptions under the guise of ‘entertainers’, so player movement is not drastically affected. But, in some circumstances, Britain will negotiate a Hard Brexit, where current rules for non-EU players will be replicated for all non-UK players. It won’t be to everyone’s liking, as it could make the game much harder, but it is a bold move nonetheless.

For me, Football Manager 2017 is undoubtedly the best game in the series, and even when results aren’t going my way, I’m desperate to come back and go again. The changes to the match day experience are superb, and the social feed is a touch of genius.

Brexit to be Simulated in Football Manager 2017