Every once in awhile, a video game developer opts to try something wildly different to what has come before it. Sometimes that risk pays off, sometimes it doesn’t. It seemed odd that a company would consider making a game that requires the Kinect, given it’s somewhat “dead in the water” status these days. But Through Games have done exactly that with FRU, a game that requires Kinect in order to be able to play it. Was it worth the risk?

To answer that question, you need to head back to the start of FRU’s development. Starting life as the result of a Global Game Jam in 2014, the initial idea behind it was created in just 48 hours. Since this was two years ago, Kinect’s status at the time was that you couldn’t buy an Xbox One without it, that it was key to the platforms operability. Which, given the certainty of Microsoft should have quelled any doubts of risk about creating a game solely for it. 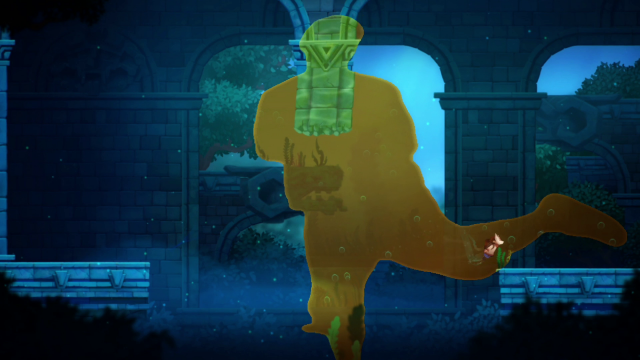 Fast forward to present day, and here we have FRU in all its full-release glory. From the opening screen alone it’s clear that there’s a lot of passion in the development team, as the art style exudes a level of quality oft reserved for much larger studios. There’s not much in the way of extraneous fluff here either, relatively simple options to change volume of the music and effects, whether controller vibrations are enabled and a shortcut to the Kinect calibration on the Xbox dashboard.

Everything here is geared into getting you into the game as quickly as possible, and when you do get going, the game eases you gently into the primary mechanic of FRU. With your body in front of the camera, you’ll see a silhouette representation on screen to match; your job is to use your silhouette to complete the level - literally. Where your body is on screen creates a ‘portal’ in which either previously hidden platforms will appear, or the inverse; previously visible platforms will cease to exist. Once you’ve moved through the first batch of levels, that mechanic changes slightly, and now the ‘portal’ acts as a body of water in which you can swim - alongside still making platforms and death traps appear and disappear more times than a magician's assistant. 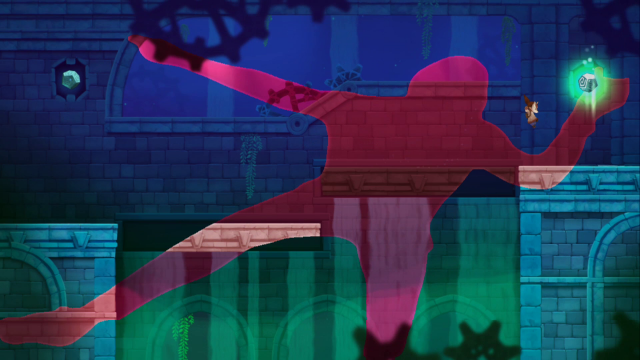 The control scheme outside of Kinect is brilliantly simple, and manages to stay out of the way of making complex body shapes for getting you through a level. By mapping movement to both analog sticks, and jump to both triggers, you can effectively control your character with only one hand on the controller. So when you need to stretch both arms out wide, you can rest assured that you still have full control of the character. The control that you do have is exemplary, smooth and with a sufficient weighted feel. Never once during gameplay did I feel frustrated with the characters movement. Mine in front of the Kinect, however, was a different story.

At one point, I mumbled out a “shifty bastards” under my breath, as the level I’d just completed lead into a dead end on the next screen. Returning to the previous level and covering the exit revealed some additional platforms I needed to have jumped on in order to progress. This was met swiftly with an achievement unlock which left me laughing; “Never trust developers” - awarded for falling for exactly that trap. There’s also a bonus mode that’s unlocked if you managed to collect the 24 golden bears throughout the main levels. It has you playing the original game that started it all - the version made at the Global Game Jam. It’s a well-deserved nod to be able to look back at what FRU has come from.

Overall, this is the game that Kinect has been dying for. It’s clever and makes you think without having to rely on gimmicky interactions. But it’s a shame that it’s come at a time when the Kinect seems to have been shuffled off to one side like the kid that always gets picked last to play football.

FRU (Reviewed on Xbox One)

FRU delivers the game that the Kinect needs to remain as a viable device. The clever set of mechanics that are on offer means that if you have a Kinect currently gathering dust, you owe it a game of FRU. 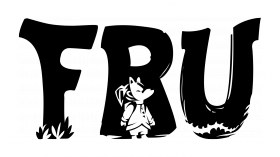