Start your engines, load your guns and strap in because it's going to be a bumpy ride in Fuel Overdose for the PS3. The game is different from any other racing game on the market today, mainly because of the top down camera giving you a kind of retro feel. So having been two years in the making, have all the development hours been worth it, or will you find yourself craving a more realistic racing title?

In 2010 I-Friqiya started work on a new kind of driving title for gamers, a tactical action racing title; two years on and it's hit the Playstation Network. The aforementioned camera angle may be a rather different choice but this is one of the many ideas that set Fuel Overdose apart from other racers. Along with this and a different take on big city tracks and weapons, Fuel Overdose gives a good first impression. 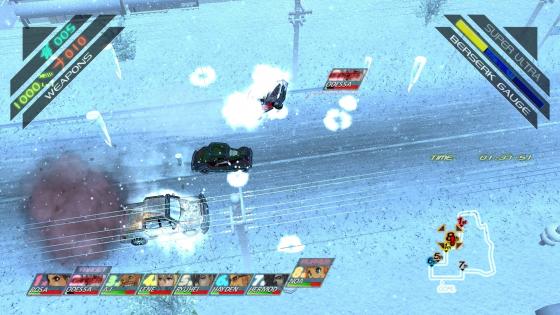 The logical place to start is to explain the cars and tracks. The tracks are located all over the world from Cairo to New York, but due to global warming the landscapes aren't what you are used to seeing; New York is a flooded mess and the Kyoto track is under a blanket of snow. Given the effects of global warming, don't expect to see a shiny sports car for you to drive around, the choice of cars are the complete opposite with them looking like they have just come off the scrap pile. Thankfully they have been modified with guns and other devices that should help you kill your competition.

Fuel Overdose isn't a typical "tactical racer"; instead of collecting your weapons while you go around the track you will need to buy what weapons you think you will need before the start. If you run out before the end then you will be left with no attack and will probably end up being blown up. Every race leaves you with a decision, do you go all-out attack at the start or try and be conservative and save as many bullets as you can then try and fight your way to the front at the last few corners. The weapons include a machine gun, rocket launcher and mines. If you're in first place and need to attack the opponents coming from the rear but you're all out of mines, you can try to drift around the upcoming corners, by holding both the brake and accelerator together. By doing this you will be able to swing your front end around and aim your guns behind you which will enable you to damage the competition without losing a lot of time. You also have use of a grappling hook. With the grappling hook you can latch on to the back of your competitors and, if timed right, unhook yourself and fly past with a speed boost. 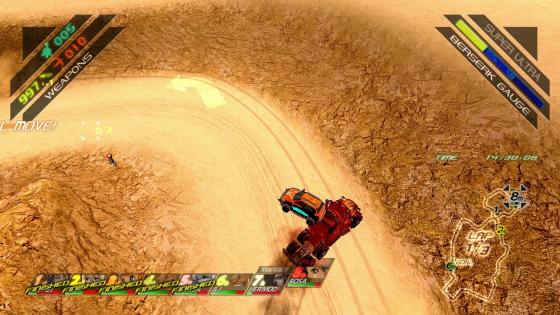 There are nine characters in Fuel Overdose. Every character in the game has their own special attack that can only be triggered when the Berserk meter is full. You fill this by getting combo hits on other players and when full, you will be able to unleash your special attack on opponents near you.

There are multiple game modes for you to create destruction with - quick race, story mode, challenge mode and multiplayer mode; luckily all modes will let you blow up your competitors anyway you see fit. The quick race mode is like any racing game you have played before, pick a car, character and track and go racing with no objectives. Story mode lets you pick a character that has their own unique story, then you will go on a journey around the world racing and blowing stuff up. Challenge mode allows you to do a variety of different races on the tracks in the game, first there is the normal chaotic racing that you will be familiar with, then there are time trials with no weapons or grapple hooks and no opponents just you and your car. Then there are the two carnage modes, which you can find in the challenge mode. First is last man standing where you have a number of laps to kill everyone else. Then there is Survival mode where you have no weapons and have to finish the race as high up as possible as well as staying alive due to everyone else having a full weapon arsenal. Multiplayer allows you to use to cars and upgrades that you have won in single player to defeat players from all around the world. The first couple of games online will feel chaotic but after a few you should get the hang of it and be right at home. One thing that is quite worrying about online play, is the lack of people on it does take a few minutes to find a lobby, but when you're there you'll lose hours trying to be number one in that lobby. In all game modes, the higher up the rankings you come the more credits you will get to spend on new vehicles or to improve your current one. When facing the AI in any of the game modes you may find that every now and again that they will be driving towards you for no reason at all, apart from this the whole racing experience is really good. 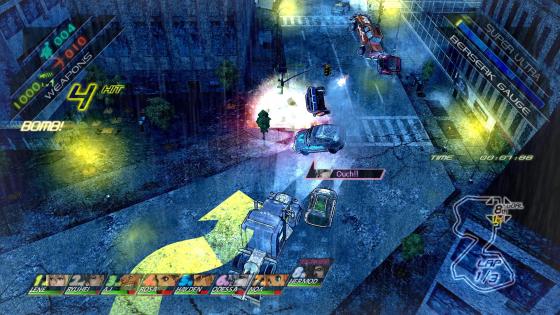 Overall, Fuel Overdose seem like it will be one of those games that you will be slightly apprehensive about buying but when you do, you won't regret it. The combination of the top-down camera and cartoony graphics will take players back to their youth, and will make you want to come back for more. Sometimes the racing will get a bit over the top but without this I feel that the game would be lacking something and that what makes me going back for more. Fuel Overdose will probably end up being my most played game on my PS3 in the coming months.

Start your engines, load your guns and strap in because it's going to be a bumpy ride in Fuel Overdose for the PS3. The game is different from any other racing game on the market today, mainly because of the top down camera giving you a kind of retro feel.

I'm getting a PS3 soon and this is going to be the first game I play on it. Really wanna play it!