Originally named Overstrike, Insomniac Games' Fuse is largely a mixed bag in terms of gameplay. As we mentioned in our preview, Fuse shares many similarities with both Gearbox Software's Borderlands series and People Can Fly's Bulletstorm. Yet, whilst Insomniac have made good use of existing ideas, you'll frequently find yourself wondering during the 10 hour campaign why Overwatch 9's death defying mission can sometimes feel so dull.

Fuse is frequently good, but it's never great. It's a sweeping statement to be sure, but it's one that perfectly sums up the title in a nutshell. You are part of a quartet of rag tag soldiers, dubbed Overwatch 9, who are tasked with retrieving the titular alien substance after its theft by the rogue military group Raven.

What sets Insomniac's 3rd person shooter apart from others of its kind are the 'Xenotech' weapons that each protagonist acquires. Not long into the game's first stage, you'll conveniently discover the now weaponised substance; with each gadget having its own unique ability. Much like Borderlands, these weapons are tied to your skill tree, which can upgrade both standard weaponry and unlock new abilities for the former. These are unlocked by earning skill points through creative kills, completing objectives or finding hidden experience stashes, and this is when Fuse really starts to shine – if you're playing co-op. Insomniac have clearly created their shooter with teamwork in mind, and whilst Fuse is perfectly playable alone, you may feel short-changed by the lack of adaptive AI if you decide to go solo.

Team up with three others though, and the Bulletstorm inspired scoring system reveals itself as the true star of the show; with an extensive list of methods to kill enemies on offer. Your foes become progressively stronger as you progress, with one certain enemy carrying impenetrable shields, you are forced to think strategically. As Dalton, the stereotypical wise-cracking hard man, we would use his Magshield for cover whilst another player would use Naya's invisibility to sneak behind and assassinate them.

It's a brilliantly fun system when you have four players working together to think up creative kills. However, if for whatever reason you are flying solo, the whole experience starts to turn slightly sour. Insomniac hasn't left players completely in the dark, as AI is competent enough to revive you and take out hordes of Raven soldiers, but they will rarely, if ever, be of any tactical advantage to you. In addition to this, if your AI teammates are downed and bleed out, you'll be dragged back to your last checkpoint which is rather unfair. 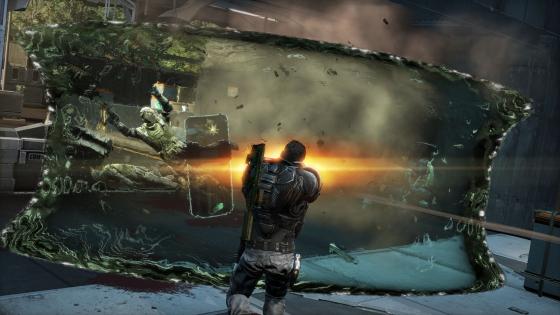 Enemies themselves become rather stilted and repetitive too, with most being variations of earlier grunts. In addition to this, later iterations, such as manned mechs and airships, become bullet sponges, and although most of these have weak points, the battles largely come down to plugging away at the enemy until they fall. Firefights also get increasingly frantic towards the climax of the game, and we found it almost impossible to survive unless we used Dalton's Magshield to protect ourselves, resulting in tactics going swiftly out the window.

Dotted between the arena-like battles that each conflict feels like, are stealth and climbing sections. These have clearly been implemented as a means to break up each battle, but neither feels essential. Stealth sections especially feel clunky, as once you are seen, all hell breaks loose, giving you no choice but to clear the room of enemies.

Chances to explore the linear levels are slim, but if you do venture off the beaten path where possible, you'll find the usual deluge of audio logs, extra experience and 'Fuse credits', which can be used to purchase perks that buff the entire party.

These will mostly be earned in Fuse's horde mode however, which is where the majority of the titles replayability will come from. You'll be helped along the increasing repetitiveness of Fuse by its above average sci-fi score and wise-cracking cast, but by the time you reach the game's conclusion, you're unlikely to find the experience a memorable one. But if you're a fan of co-op games, then Fuse is a good candidate to see you through this summer's games drought.

Originally named Overstrike, Insomniac Games' Fuse is largely a mixed bag in terms of gameplay. As we mentioned in our preview, Fuse shares many similarities with both Gearbox Software's Borderlands series and People Can Fly's Bulletstorm. 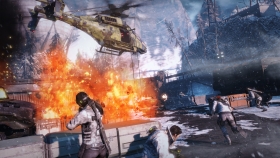