If the name of a game alone can stand as a full explanation for the entire goal of said game; that's either fantastic marketing or a title that lacks any interest or depth. Galactic Delivery has you deliver packages around the galaxy - that's it. 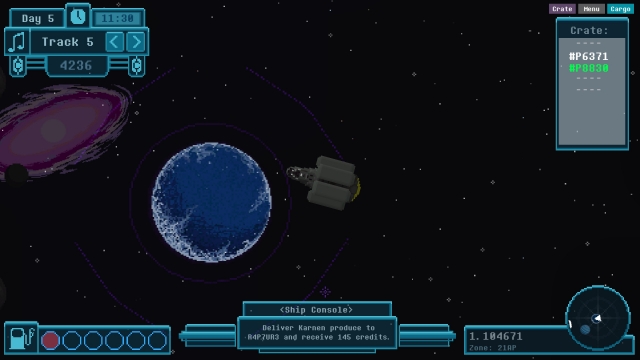 Many games over-inflate expectations and underdeliver, while others can find unprecedented fame for a promise of very little. Galactic Delivery doesn't fall into either of those categories, offering no false expectations with an unassuming price of around £2/$2.

You are a nameless delivery driver that's intent on getting hired full-time at their new gig. After loading up with packages, you set-off delivering. A black dual-thrusted ship manoeuvres using WASD, with Shift for boost and Spacebar for interaction. The mouse can be used to navigate the busy - yet unintuitive - HUD where you can view a map of the galaxy and your expected deliveries. You could practically play using an Atari arcade stick due to its simple inputs. Mouse and keyboard immediately feels overkill for this kind of simplistic game. 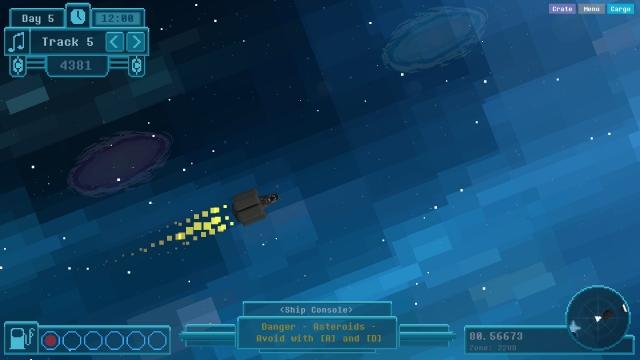 Besides you, the cast of Galactic Delivery is very small. Other than a few random NPC sprites, there are two other named story characters. The first is a robot is called Sine, who briefs and debriefs you at the beginning and end of every day. On the odd occasion, he comes up with a somewhat witty quip - that's his gimmick I suppose. The other is your boss, named Trog. He has little to no personality and is very unmemorable. This is in spite of his character's interesting visual design, that could have painted a different picture. No character follows a real story arc here, so their backgrounds are mostly unimportant.

There's no pretence with Galactic Delivery though. It's not trying to be something it isn't, just a simple task-following title with a bunch of relaxing electronic beats peppered over the top of it. That's totally fine, as long as your not anticipating anything else. 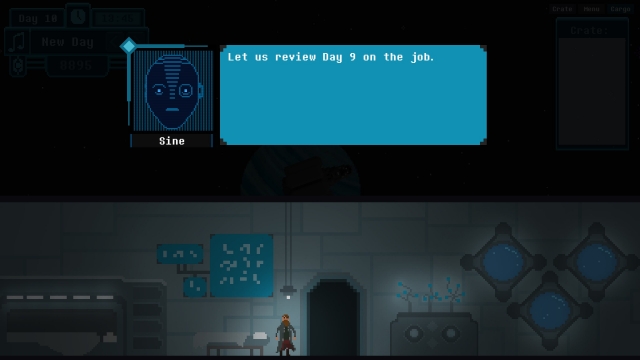 The day runs from 6am until 2pm which is firstly, a really bizarre shift slot, and one that isn't explained to you until you get to 2pm without delivering all your selected packages. Before heading out, you have to select the packages you are intending to deliver. You can choose to carry any number of packages from one to eight. Be warned though, if you select too many and run out of time to deliver then you'll be penalised and deducted money from your pay.

As you fly around the galaxy delivering your allocated packages, you can pick up side jobs and purchase random odds-and-sods from neighbouring planets to your delivery destinations. Trinkets include items such as a Monitor Pass - that I apparently have 128 of - and a Net Tracker, don't appear to have any obvious use. The items just appear in your cargo list and have no hints as to why they're there. 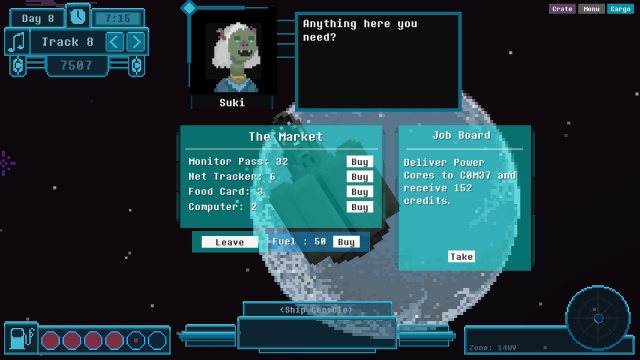 During play, you start expecting there to be more to the game than you're getting. Yet, the items you can buy from random planet marketplaces, and the seemingly pointless currency you earn, don't offer any enhancements. Truthfully your only obstacles in this game are the clock, your fuel, and the odd stray asteroid in the middle of the warp funnel you're travelling in.

There isn't a lot to Galactic Delivery. It's a simple game, with a simple set of rules and little-to-no ingenuity bar the music, which I do really enjoy. The 14 tracks offer a wide variation in slow and drawn-out synth chords and varied techno melodies. They don't follow any sort of narrative but even the most impressive of scores would struggle to accompany the gameplay with any meaningful substance.

Galactic Delivery is a game that's tough to pin down with a definitive yes/no recommendation. If you know what you're getting into for the price, and not expecting a grandiose deep and thought-provoking story; just something to mind-numbingly breeze through with a spare half an hour - then you can't be disappointed. It serves a purpose, similar to a Futurama double-bill that you've seen a dozen times before: you're not going to discover anything new from sitting back to enjoy it, but it's not an entire waste of your leisure time. A perfect procrastination game.

Galactic Delivery serves a purpose, similar to a Futurama double-bill that you've seen a dozen times before: you're not going to discover anything new from sitting back to enjoy it, but it's not an entire waste of your leisure time. A perfect procrastination game.