GARAGE: Bad Trip is a top down shooter inspired by VHS era B-movies, while taking some cues from the much-loved Hotline Miami titles. Developed by Zombie Dynamic and published by Tiny Build, GARAGE: Bad Trip tries its hardest to shock players with gore, violence and incredibly trippy visuals.

Players take control of Butch, a drug-dealer that finds himself caught in the midst of a zombie apocalypse. Butch must navigate the hallways of an underground parking garage and save a girl he meets along the way. It’s not the most original story in gaming, but GARAGE is very open about the inspiration it takes from popular culture.

I was initially very excited about playing GARAGE. I’ve spent countless hours perfecting my runs on the PSP Vita port of Hotline Miami and I still listen to the soundtrack on a weekly basis. The idea of a Hotline Miami inspired horror game was something I could get behind, unfortunately, GARAGE falls at one of the most important hurdles - the way it controls. 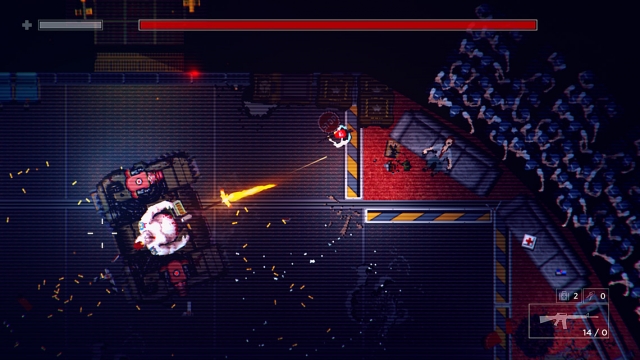 Playable on mouse and keyboard or on a controller, GARAGE tasks players aiming and reacting quickly to on-screen enemies. This wouldn’t be an issue if the aiming controls weren’t so clunky. Four out of my five deaths were the result of me punching or kicking millimetres away from an enemy’s very small hitbox. This isn’t as much of a problem with the melee weapons and guns that are introduced through the game, but it still never manages to feel fluid.

That lack of fluidity in combat really sours the core experience, with movement feeling janky and somewhat restrictive compared to the likes off the aforementioned Hotline Miami. What should feel like a fun responsive arcade shooter, turns into a dour battle with the game’s controls.

Outside of the poor controls, there's an interesting game to be found. The art direction and story meld together to create a unique experience that sticks to its inspirations. The horror inspired pixel art creates a moody and tense atmosphere. Zombies and other monsters splatter in a mess of red blood, while the lighting works against players to limit their visibility. Level design is claustrophobic and cramped in a bid to force players into the paths of enemies. Hallways, car parks and rooftops are all scattered with debris to ensure movement isn’t always easy. This coerces players into scuffles, which would play off a lot better if it weren’t for the aforementioned clunky controls.

There were a few moments in which GARAGE’s visual design gave me a slight headache, but this was during one of the 'trippy’ segments. The entire screen wobbles while flashing multiple colours, but players must also still contend with the control system to defeat enemies. I feel this would be easily remedied by dialling back the screen wobbles, but in its current state it is visually challenging.

Unfortunately, the audio falls short in comparison to the visuals. The human sound effects in particular feel cheap against the game's excellent art style. Sound is a key aspect of building suspense and it feels like the developers dropped the ball on this aspect of the design. The environmental design throughout GARAGE is excellent, with players having the ability to interact with numerous items. Some of them can affect combat, while others can only be kicked over or moved around. It's a small touch that makes GARAGE’s world feel tangible and far more interactive.

I feel like there's a lot of potential to be found in GARAGE: Bad Trip, but the poor controls and lacklustre sound design spoil an aesthetically interesting game. It’s core inspiration of B-movie horror sets its apart from the crowd visually, but the art style wasn’t enough to keep me coming back.

feel like there's a lot of potential to be found in GARAGE: Bad Trip, but the poor controls and lacklustre sound design spoil an aesthetically interesting game.