Gears of War was once a powerhouse of the Xbox family of consoles, with Gears of War 2 being one of the must-have games of the Xbox 360. Along with Halo, Gears of War was synonymous with Xbox and was an exclusive that was well worth its weight in gold. Unfortunately, this reputation would not last, as the Gears of War series has not been well received in recent years and has been largely ignored by the wider gaming community. That is not to say that Gears of War is not a quality franchise;  in fact Gears of War is doing much better than Halo when it comes to critical reception, and Hivebusters is proof that Gears has much to offer. 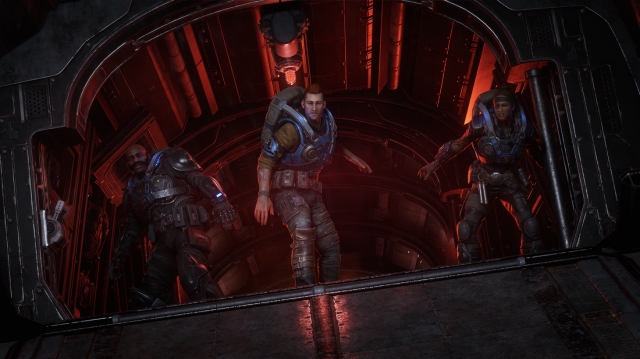 Hivebusters is a $20 or £15.00 campaign expansion pass that explores the formation of Scorpio Squad and explains how the Escape mode came to be. After the events of Gears of War 4, we are introduced to Lahni, Keegan, and Mac as they are sent on a suicide mission to bust a hive from the inside out. This story is not going to change the world, but it gets the job done as it strings you along from one fun set piece to another. The real stars of the show are the Scorpio squad and they have quickly become some of my favourite characters in the Gears universe. There was a common complaint with Gears of War 4 and Gears 5 that they were treading on old ground and most of the new characters felt bland compared to characters like Marcus and Baird. Thankfully, each member of Scorpio has a unique personality and brings enough to the table to remain memorable. Whether it's Mac’s speech in the Condor talking about how he hates surprises, Keegan’s regret for his time as an Onyx guard, or Lahni’s connection to her people on Weilehi, it made me feel connected to their struggles. Since the campaign is only four hours long, the characters never lose their charm and their progression throughout the story is laser focused.

Speaking of laser focused, let's talk about the gameplay that you can expect from Hivebusters. It’s the usual arrangement of chest-high walls and the act of shooting from said chest-high walls. All of the guns and tools you pick up throughout the campaign are pretty standard, as far as Gears of War goes, but locales and set pieces they push you through makes the gameplay fun and refreshing. On one mission you enter a deserted COG base to plant a bomb and you have to escape before the bomb can kill you. On your way out you hop on a giant metal door and glide down an active volcano while shooting down the swarm. It’s a tense, but entertaining journey that feels brief, but rewarding. 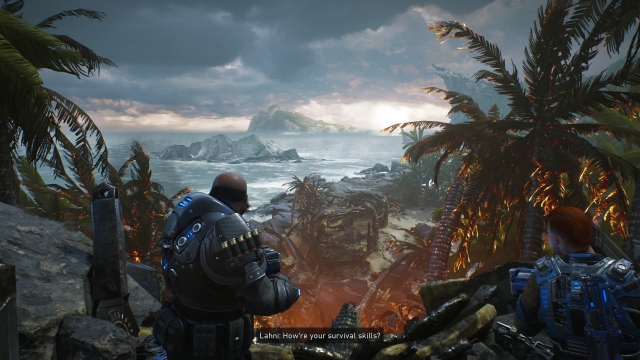 Beautiful Landscapes that prove the power of the Xbox Series X

The graphics for this game are gorgeous. Unlike previous Gears games, Hivebusters takes place in the lush Galangi islands where there is danger around every corner. The bright colour palette is a breath of fresh air and brings a unique aesthetic that puts even the most graphically impressive games this year to shame. All the animations are polished as well; the scripted scenes are executed masterfully and you never feel like you lose control of where the action is taking place. You even get to explore parts of the culture of Galangi islands through Lahni and I enjoyed learning more about the world of Gears of War.

Hivebusters will net you at minimum a 3-4 hour campaign experience with some incentive to replay the campaign at least twice; once by yourself, and again with a friend. Each playable character in the campaign has a unique rechargeable ability. Mac has a shield that protects from most damage, Keegan has an ammo drop which replenishes ammo to nearby teammates, and Lahni has an electric knife. Each character plays a role in combat and if you play with friends and coordinate these abilities it can be tons of fun. There are plenty of collectibles to pick throughout the campaign and each one brings a little insight on each character and the island of Galangi. The final boss was extremely rewarding to beat and felt like a natural conclusion to the story of Scorpio squad.

Hivebusters is a safe but rewarding package that gives you more of what you love about Gears 5. The characters are strong, the campaign is solid, and gameplay is exactly what is expected. If you are a fan of Gears 5, then this expansion is a no brainer and is easily another reason to get Game Pass.