I didn’t first play Geometry Wars on the Xbox, but a homebrew version of it that someone had made for the PlayStation Portable. Obviously it lacked what the original had and though I did eventually play the original, it was not for as long as I did that knock-off. Cut to a decade later and the fourth iteration is out.

For those who have managed to miss it, Geometry Wars is like a bullet-hell game that is confined to an arena, where you use either both sticks of a controller or the mouse to shoot at any angle around you, whilst the arrow or WASD keys control movement. In Dimensions the arenas have changed from simple square or rectangles to 3D shapes like cylinders and orbs. This adds more strategy than before, as hoping the cylinder doesn’t fill up too much is a much different experience to hoping the rectangle field stays clear. 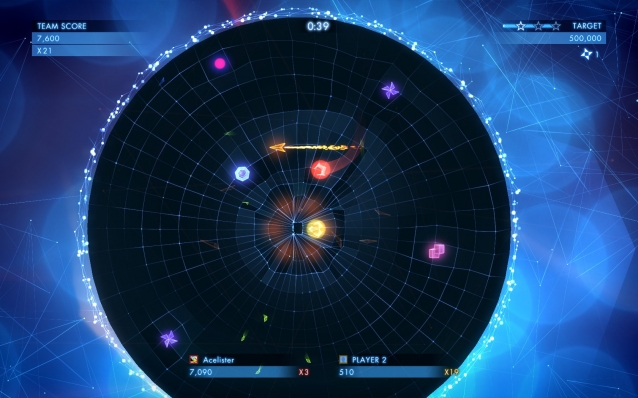 There are several game modes present in this version; Adventure, Local Co-Op, Multiplayer and Classic Mode. In Adventure, you have to complete a few levels, then a boss - rinse and repeat - whilst collecting stars by getting a high enough score. The levels can be one of several modes, such as requiring you to either defeat as many enemies in a time limit with unlimited lives, or fight as long as you want with a single life. After each boss you unlock a new drone, which can either help the fighting, help defend you or collect the little gems you need to up your score multiplier. 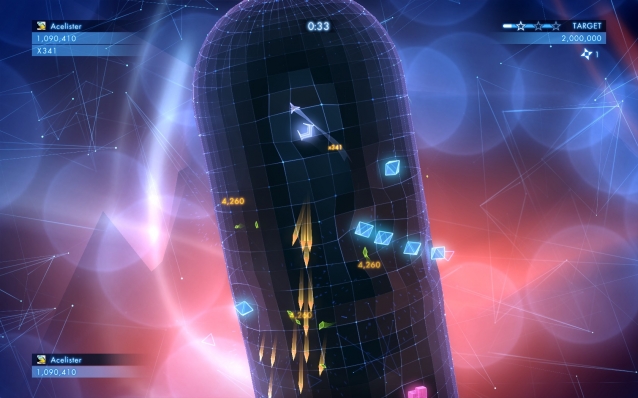 It’s currently very rare to get a game, but I did manage to play a game of Stock. I didn’t manage to kill the boss, but I did manage to kill more minor enemies. I also died a ton of times. I’m pretty sure the enemies aren’t shared on both screens, but the boss is. The Classic modes are just like the past Geometry Wars titles, so the leaderboards are going to be chock full of seasoned players.

Finally, the presentation of the package. It looks as colourful and vibrant as ever, with each enemy type being a different neon shade as well as quite distinct looks. They’re very simple shapes, which helps in identifying each one before it can try to kill you. The audio is very up-tempo and electronic, and quite catchy. In fact, all twelve tracks have been released on Soundcloud for free. 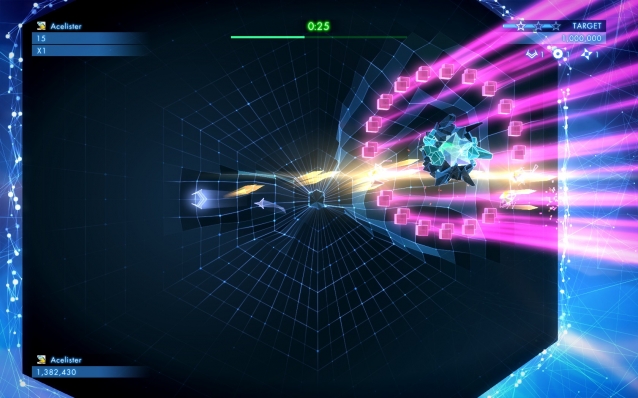 It’s a nice update to a series that last had a new title six years ago, though that’s all it feels like. It doesn’t have a lot of depth, and most of the replayability comes in the fact you need to replay Adventure levels a lot of times to earn enough points to upgrade your modules. And if you fail to get three stars, you will need to keep trying until you do - otherwise you can’t progress past each boss. There really isn’t a lot to this game, past the flashy visuals and leaderboards, so if you’re looking for more depth than the original Geometry Wars, you’ll be disappointed.

There really isn’t a lot to this game, past the flashy visuals and leaderboards, so if you’re looking for more depth than the original Geometry Wars, you’ll be disappointed.