I’m not much of a handheld gamer: I spend a majority of my time on the computer, so naturally, my gaming also occurs there. Yet when I was offered the opportunity to look at Glyph, an atmospheric 3D platformer by Bolverk Games, I was oddly excited, having covered its launch on Nintendo Switch earlier this year. The game offered a change of pace to the type of games I typically play, and the experience itself was my first time properly using the Switch.

Glyph is a 3D platforming game where you play as Glyph, a small mechanical scarab that has been woken up amongst an abandoned desert. You are immediately introduced to your waker, another mechanical scarab by the name of Anobi, who explains that you must find the Lost Temple of Aaru in order to cleanse the land of the corrupted sand that plagues it. Anobi acts as the player’s guide — offering a voice both between and during levels, and walking players through all of Glyph's abilities through the game’s tutorial. 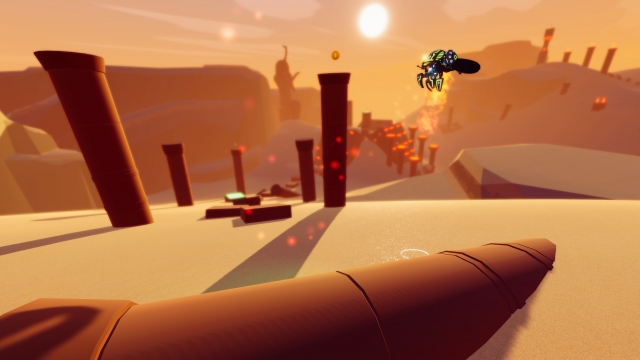 The world of Glyph used to be a lot more idyllic than the one we find ourselves awoken into. A race of beings, simply called The Elders, created a machine called The Guardian to defend the temple, but something went horribly wrong and it became corrupt. By collecting various coins, gemstones, and artifacts, the overall goal of Glyph is to rebuild the Lost Temple of Aaru, and find a way to purify the corruption that began within it. The temple serves as the game’s hub, allowing a non-linear style of gameplay where players can complete levels in any order, and revisit older ones with ease.

A varied collection of gemstones, coins, and artifacts are required to progress through the game. These can be found within the various levels in Glyph. As well as this, players need to look for keys in each level in order to unlock the exit portal. While players can just speed straight for the keys and leave, you will quickly learn that exploration is key (no pun intended) and that you’re going to need to go out of your way in collecting the other resources if you wish to progress. When playing open-world RPGs, I suffer from the problem of literally wanting to do every damn quest I come across. The main culprits of this are the first two Dragon Age titles, in which I have spent a ludicrous amount of time in all my playthroughs just doing every mission I found. But, like the stroppy five-year-old that I really am at heart, when I’m forced to do such a thing, such as in Dragon Age: Inquisition, where story missions are locked behind a resource that can only be attained by completing side quests, I don’t want to do it.

At first I was worried that a similar philosophy would manifest in me with Glyph; thankfully, Bolverk Games managed to strike a balance with gathering coins, gems, and artifacts that perfectly straddled the intention of encouraging exploration without discouraging progression. One of the game’s major selling points is that it can be a game to play in short 10-15 minute bursts, or a game that you sit down and play for hours at a time, and you won’t have a lesser overall experience for choosing one over the other. The story isn’t at the forefront, but Anobi offers small pieces of information during each level that form the pieces of a surprisingly deep and coherent puzzle that many players might just completely miss. You don’t necessarily lose anything by not catching these, but it’s something that rewards more inquisitive players without taking away from people that just wish to progress through the game without looking under every stone. There are multiple paths to get to the temple, and multiple levels to get the resources you need to unlock them, but if you want to just get to the end as fast as possible, you’ll be able to do so without much backtracking. 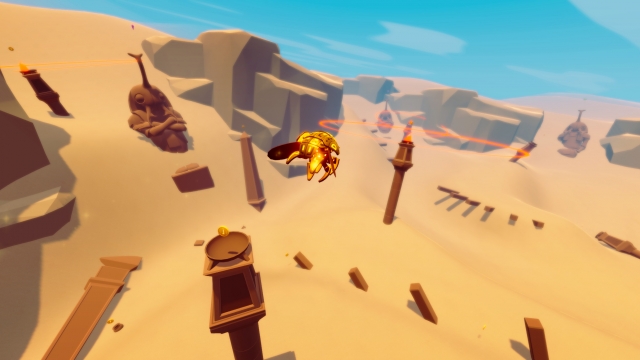 In terms of actual platforming, Glyph performs very nicely. Levels consist of exploration, where you have free reign to look around, or time trials, where you must grab all keys and escape within a short time, earning gemstones depending on your time. You can double jump, glide and slam to make your way around the levels, and the way the game handles momentum is something that can take a while to get used to, but is incredibly fun once you master it. When in the air, you seem to perpetually gain momentum until you either change direction or smack into a physical object, which as well as being incredibly fun if you find a high tower on one end of the map, is also something you need to master for the later levels. One time trial in particular requires you to throw yourself into a series of small, angled platforms quickly enough that you can ricochet off to progress - losing any momentum will result in soaring under them or falling short. It’s a fun level that puts all that time where you threw yourself across the map with reckless abandon in earlier levels to the test.

All of this culminates in a boss fight against the aforementioned Guardian, in a level style that I’m honestly sad we didn’t see more of. Critiquing a game based on my own expectations of what it wasn’t even trying to be is not valid criticism, but more ‘boss’ levels would have offered a refreshing change of pace, especially in the later portions of the game where you have a rhythm down for each level type and can complete them relatively quickly even as the difficulty increases. 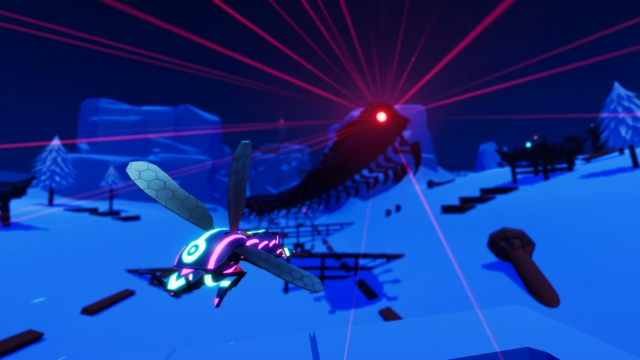 Overall, Glyph is a fun, well-made platforming game that rewards dedicated play without penalising those looking for short, casual fun — arguably an important balance when designing handheld games. While it can get a bit stale towards the end, the platforming is enjoyable enough and easy to jump into that Glyph is still an enjoyable experience even beyond beating the final level.

Glyph manages to walk a balance regarding its game mechanics that many other titles struggle to get right. Whether you want to uncover every secret, or just get lost in some platforming, Glyph has you covered.