The sequel to the 2018 Game of the Year winner God of War (2018) is finally out for everyone to enjoy, with God of War Ragnarok, the conclusion to the Ragnarök storyline! This highly-anticipated title has been in development for five years and concludes the storyline started in God of War (2018). Was the five-year wait worth it?

There are two things I'd like to mention before I get into the review. First, this is a spoiler-free review; although the game has been out for a while (at the time of writing), I'm going to spoil as little as possible about this title. As this is a very narrative-heavy , with numerous gameplay aspects being bound to story elements, a lot of this review will be based on vague explanations for story parts that will have no spoilers about the game's events. Second, this review will contain spoilers for the original God of War (2018), as it is a direct sequel to it, and it's written expecting that you've already played that game. With that out of the way, let's talk a little bit about the narrative... or, at least, what I can.

The story starts off five years after the events of the original God of War (2018), and dynamics remained mostly the same between the characters, aside from a growing friendship between Kratos and Mimir. The time skip isn’t as jarring as it might seem at first, as the story continues off from the events of the prior game without much difference. This was bit of a strange choice, considering five years have passed and it feels like every character avoids talking about the events that transpired, but a welcome approach nonetheless, as I was happy to come back to characters and dynamics I’d originally left off without having to catch up on events I didn’t get to see. God of War: Ragnarök introduced some new characters to play different roles in the apocalypse; some of these I sincerely cherished, though I do wish they'd had more screen time. This leads me to one of my first quarrels with the narrative — many new and great characters were introduced, but none were given enough time to get to know them properly.

It’s quite obvious that God of War: Ragnarök, and the Ragnarök storyline that it concludes, was meant to span two more titles in the franchise; the length of the game, as an already long experience, is nowhere near enough to introduce you to all of the important new faces and give you sufficient screen time with the returning cast. The introduction of new characters feels rushed and — unfortunately — poorly done, with major new faces being used for main stories whilst other, far less important characters get side quests that should’ve otherwise been given to the important ones. Along with the new important characters being introduced, the additional “filler” characters that form a “war party” never amount to anything but take up most of the side quests; I wish that they’d either played a more significant role in the narrative or these quests had been given to more important personalities.

That said, all of the returning characters had sufficient screen time, something that I was jubilant about. You get to spend chunks of your exploration with the original cast, each playing their own role in one way or another; although this was a welcome way to let us spend time with the characters, it was a jarring change from Atreus’ omnipresence and took away a lot from the father-son dynamic throughout the original title. Separating Atreus and Kratos makes sense for numerous reasons I can’t explain, but it stopped the narrative from showing how much Kratos had grown throughout the five years in Fimbulwinter, which turned a character that was already phenomenal somehow better than he already was. Story-wise, I felt that God of War: Ragnarök doesn't hold a candle to its predecessor. There were several times throughout the narrative that I was left wanting, though none more so than when I'd finally finished the game. That said, the same cannot be said for its gameplay aspects, as it feels like the game adds new mechanics to an already-perfect system — something I didn't even know was possible.

God of War: Ragnarök builds on its combat with numerous additions that I thought might be annoying but add incredible depth to its fighting. Kratos' arsenal grows larger in this title, with new abilities and combat options unlocking as you progress the game that allows you to create, or recreate, the perfect build. The Blades of Chaos now have a new triangle ability to use, making a weapon that felt a bit lacklustre in the original, with its combos and combat options feeling limited and more runic-power based than the Leviathan Axe, far more fleshed out and competent. The new triangle ability, albeit useful and fun, threw me off a bit, as I had built a very bad habit of recalling the axe to wield it throughout the original, but at least it provided some laughs.

The Blades of Chaos quickly became more than just a competent weapon, as its runic attacks remain as powerful as the original, though I did feel that the selection of runic abilities, both for the Leviathan Axe and the blades, felt a bit limited. This isn’t necessarily a complaint, as I appreciated having better runic attack options than having a lot that I didn’t intend to use, but the selection still felt a bit disappointing, especially when considering that a lot of them were reused from the original. I did, however, appreciate that some of the more important ones, such as the Blades of Chaos’ Hyperion Grapple, became permanent abilities that don’t take a runic slot. 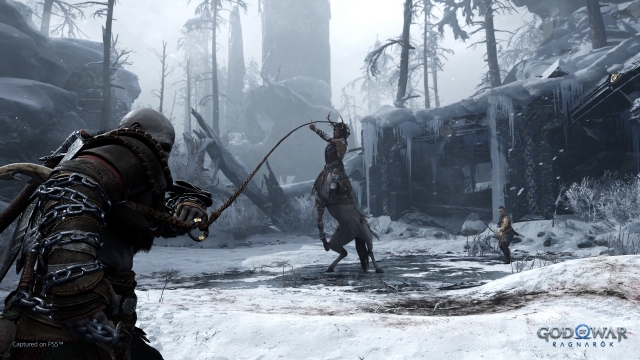 Another upgrade from the previous title is the way God of War: Ragnarök handles its enemy variety. While in the original I was tired after having fought Baldr numerous times throughout the game with little to no variety in abilities — something that was present even in common mobs — God of War: Ragnarök introduces a slew of new foes and reuses some of its older ones, making the enemy pool feel vast. I thoroughly enjoyed being able to fight some of the new enemies; most notably, the light elves of Alfheim had some of my favourite, albeit sometimes tear-inducing, move sets to fight against!

New bosses and enemies are introduced gradually, with new status effects and maladies being brought into play, such as the new Bifrost mechanic that deals unhealable damage; the way new enemies appear is done in a masterful way that doesn't feel jarring, scary, or overwhelming. New status effects, foes, and even bosses are welcome from what otherwise became a Draugr- and Baldr-fest in the original. And new ways of fighting these, including environmental combat and more options for battle, are incredibly welcome and very satisfying.

Playing in No Mercy difficulty (the equivalent of "Hard"), I was left a bit disappointed with the amount of mercy I received. Some bosses, many of which were built up to be scary-sounding adversaries, left me wanting in combat. Nothing too major that I felt was a hindrance to the experience, but I do wish that more bosses had been more difficult and more menacing than they really were. 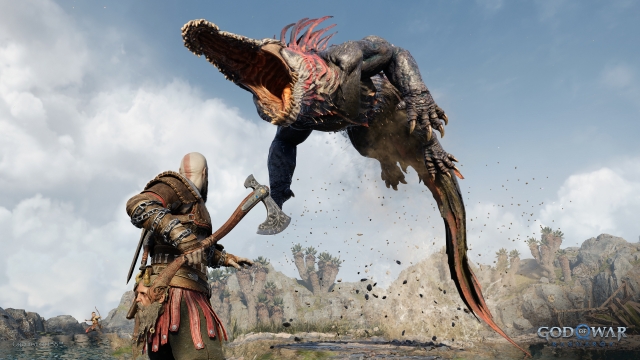 Finally, in God of War: Ragnarök, you won’t only be playing as Kratos throughout the story, as — for the first time — you'll be able to play as Atreus, too! Equipped with a bow and arrow, his attacks and fighting pattern differ drastically from Kratos’ otherwise hard-hitting abilities and opts instead for agility and quick-paced fighting. At first, I was worried about the implementation of a mandatory bow and arrow section due to me being terrible at aiming with controller, but Atrues’ kit is surprisingly enjoyable, with numerous melee attacks that don’t force you to shoot your foes if you don’t wish to take that approach, though I did oftentimes miss senselessly brutalising foes with Kratos’ monstrous strength. Both characters are a joy to play and do so smoothly, something I didn't expect.

Overall, I enjoyed my time with God of War: Ragnarök. The constant pressure and fear of the upcoming prophecy, some of the characters that I grew to love, and the fantastic gameplay aspects were very satisfying. That said, despite its gameplay marvels, it fails to meet the bar set by its predecessor, and some of the story elements — most notably, a slight chunk of the ending — were disappointing.

God of War: Ragnarok is a fantastic title, building from its predecessor's already phenomenal combat, though the story wasn't everything that I hoped it would be.

How To Defeat The First Four Bosses In God of War: Ragnarök

The GrinCast Episode 351 - It Ties Into Nickelodeon 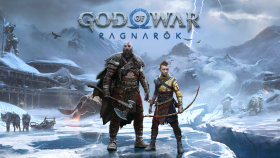