God of Word is a word puzzle game that combines word scrambling with Greek mythology. You must decipher word clues in order to reach the Mount Olympus of deciphering and unscrambling, both figuratively and literally.

The game has hundreds of levels, with over 25 unique bosses and typing games within them. The vast majority of these levels revolve around unscrambling letters to make as many words as possible in the allotted time. There are seven letters to choose from, and the higher you score, the more damage you do to your opponent - sounds simple enough right? Some of the letters have a gold or red glow, which means they will either give you more time on the clock or score more against your foes when used. If you are struggling with the letters you have been dealt, you can swap them for a 10 second penalty, so the idea of being lumbered with an unwanted hand of cards is not too much of an issue. Where the game becomes really challenging is further down the line when enemies become immune, or take little damage from four and five letter words. It really leaves you hurrying to unscramble the letters to create a six or seven letter word before the clock strikes zero. It is the time element that makes God of Word really exciting though. Unscrambling words is surprisingly fun and quite addictive, especially with the pressure I put on myself to beat the clock and defeat the CPU.

Here and there you may come across levels where words will be thrust towards you through debris and boulders. You must input the word it spells out correctly to advance beyond these levels, so there are some variations on the word games which you will encounter throughout the game. I appreciated the differences in gameplay, as it could have been so easy for the game to be based around one exclusive type of word puzzle. 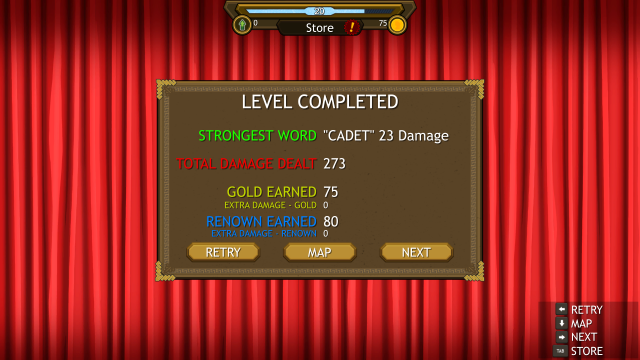 There’s also a multiplayer mode, where you duel against other players in more or less what you see in single player. In trying to outwit your foe, the game takes on a really competitive edge that adds a certain amount of replayability to the game. You can also purchase upgrades from the in-game store, and you can buy items that will either aid your game or hinder your opponents, which then adds a tactical edge to God of Word. There are a decent number of game modes on display, and once you throw in an Endless Mode for both word scramble and typing games, there certainly is good content on offer here.

Admittedly, there is only so much you can do in God of Word, as you pretty much know what you're in for once you really get going. It is likely to be one of those games that you'll either appreciate it for what it is, or you may struggle to occupy your time playing it. In my case, I thought it was thoroughly enjoyable and engaging. 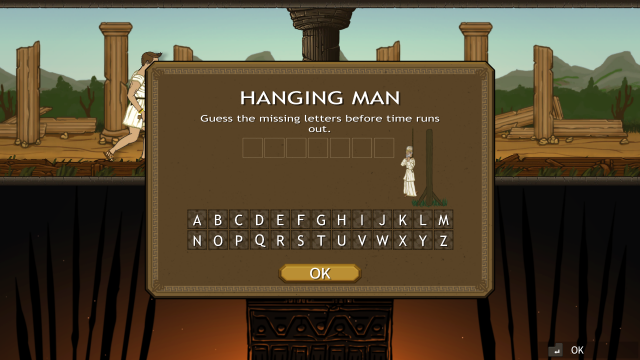 God of Word is a very engaging word puzzler game that uses Greek mythology as a fun and quirky way to improve your vocabulary and spelling, and all the while being enjoyable at the same time. The animations are neat and the game has a well-polished feel to it. The developers have identified a really cool niche to which this game slots into seamlessly - there is little doubt with me that God of Word is a stellar title.