American McGee’s Grimm was originally released back in 2008 as the debut game of the ever-odd Shanghai-based Spicy Horse. It was only available from the short-lived French digital distribution company GameTap (which you’ll be forgiven for not remembering), so never really reached a mass audience. The Alice: Madness Returns developers have now re-released the game on Steam, which means anyone can pick up this ludicrous, inspired, but also flawed title. This is a classic American McGee game, it’s full to the brim with bizarre concepts and does little to hide its outlandish style and presentation.

Grimm takes 23 individual fairy tales and tasks the player with making them as, well... grim as possible. Taking on the role of a fittingly gross little troll named Grimm (sick of that word yet?), you need to paint the landscape of each stage from the cutesy original world to a dark, disgusting and gory land, thereby making the story itself much more despicable. Every episode (the original game was released in weekly episodic fashion) begins with a ‘light theatre’ that displays the original fairy tale in all its happily ever after glory. These little shows are brilliantly brought to life by some hilarious voice acting and amusing puppet-like animation. 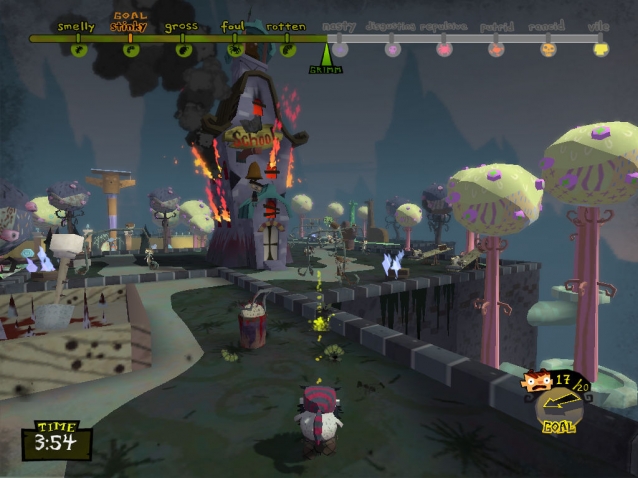 Once you’re shown the happy, classic tale, Grimm encourages you to turn it upside down and create a new, more fitting, story. The gameplay is an odd mix between Okami and the Katamari games; you simply need to guide Grimm around each stage, his mere presence will turn the world into the dark story. Moving him around is a pleasing experience to begin with; the ground turns black and dirty with every step and objects morph into horrible and obscure versions. Walk past a few barrels of clean, fresh milk, for instance, and they’ll turn into fly encrusted barrels of rum. A sign warning people to ‘mind the cliff’ is reworded to ‘you fall, you die’. There are a lot of funny little changes like this, but the general aesthetic change, from light to dark, is the most notable.

The aim of each stage is to cover a certain amount of the landscape, and items within it, with your dark powers. A scale across the top of the screen, ranging from smelly to vile, measures how much of the scenery you’ve infected, reach a certain point along this scale and you move on to the next area of the stage. Climbing through the ranks of stinkyness allows you to convert bigger and better objects to your more savage version of the tale (hence the comparison with Katamari). There are a few elements that mix this up: enemies that try to clean up the landscape, power ups that give you small temporary advantages and the useful buttstomp ability which converts a large area around Grimm. 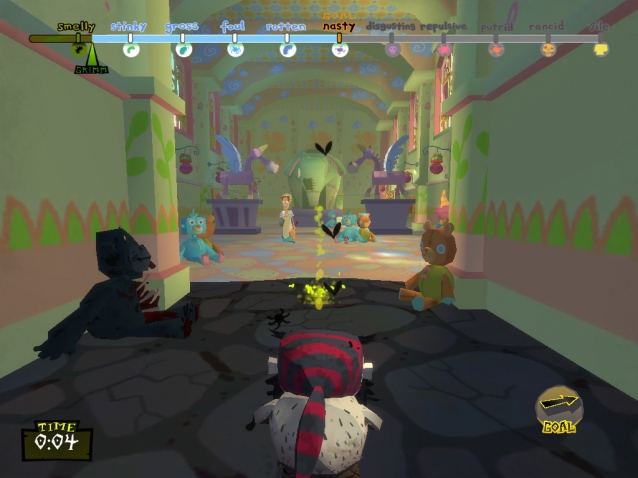 To begin with, Grimm is a joy to play. The puppet-like visuals, most reminiscent of PS Vita title Tearaway, as well as the satisfaction that comes from turning the worlds hilariously evil, make for a devilishly good combination. It’s often intriguing to see just what happens to each piece of scenery, or person, when they’re painted with the brush of evil and watching the ‘dark theatre’ at the end of it all can be hilarious. Unfortunately, after a few episodes the novelty of it starts to wear off. There are attempts at creating a little diversity like basic platforming mechanics and the aforementioned power ups, but these don’t provide enough of a change to make the later episodes more engaging. Playing through the stories you know well can be more fun, so skipping ahead to these is recommended.

By the mid-point, the components used to make a story start repeating and you’ll notice that you’ve seen this king in at least two other tales. While the art style and voice work is great, it can be a bit annoying to trudge through what feels like the same level over and over. The natural differences in the stories do provide the odd completely different location, like the inside of the wolf’s belly in Little Red Riding Hood, and some of the stories are used excellently. Mulan was possibly one of my favourite tales, but there are plenty of good ones to try, if not all in one sitting.

American McGee’s Grimm doesn't really show its age, so in this way it’s a welcome addition to the Steam library. It features some innovative game mechanics and has a delectably evil presentation that any fan of the Alice games will happily gobble up. A lack of continuing evolution across the various individual episodes leaves it feeling a little worn out by the mid-point, but for those initial few hours of play it’s a great experience. Probably worth trying out the free first episode to begin with, then buying the whole package if you’re intrigued. Grimm is more than a little bizarre, but it’s that weirdness that saves it from calamity.

A lack of continuing evolution across the various individual episodes leaves it feeling a little worn out by the mid-point, but for those initial few hours of play it’s a great experience. Probably worth trying out the free first episode to begin with, then buying the whole package if you’re intrigued. Grimm is more than a little bizarre, but it’s that weirdness that saves it from calamity.