On rails shooters and the Nintendo Wii seem to go hand in hand as naturally as peaches and cream. So it's no surprise that Sega have revived two arcade classics to the system. Gunblade NY and LA Machineguns are two old on rails shooters originating from the humble arcade halls in the mid 90's (Gunblade 1995 and LA Machineguns from 1998) the first of which is the ugly sister of the two titles. 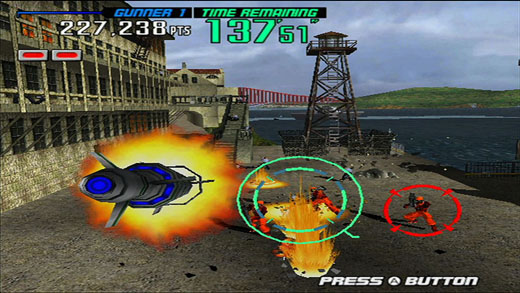 Gunblade NY is a two player affair in which each player is situated on the sides of some super agile helicopter, controlling a huge mounted gun literally blasting everything that moves. The gameplay is quite simplistic; point, shoot, rinse and repeat, thankfully however your enemies are far more varied than your control method. Ranging from lowly militia running through the streets to jetpack powered assassins and giant robots. It is an on rails shooter in its purest form.

Two campaigns are on offer in Gunblade, Easy and Hard, the first of which sees you trying to prevent the U.N. Headquarters from coming under siege by terrorists while Hard mode thrusts you into occupied Manhattan with the task of liberating the state. Visually, the game is blocky, ugly and generally not pleasant on the eye but with this being a port of a 1995 arcade machine then it's to be expected, however you soon forget the blocky nature of everything when the action moves as fast as this does which should keep you entertained for a few hours, though the inclusion of infinite continues to the game dampens any form of difficulty to the title.

Moving onto LA Machineguns, the gameplay is identical to that of Gunblade, instead of being sat on a helicopter, you're sat on some hover bike contraption, thankfully this title has faired better visually than its spiritual prequel. Taking you through multiple locations, not just LA, the rollercoaster ride will test your reactions and trigger finger with its relentless barrage of enemies and high score inflating combo system. A nice little touch to both titles is the use of the Wiimotes internal speaker which transmits radio chatter from your superiors during your gameplay, updating you with vital info. 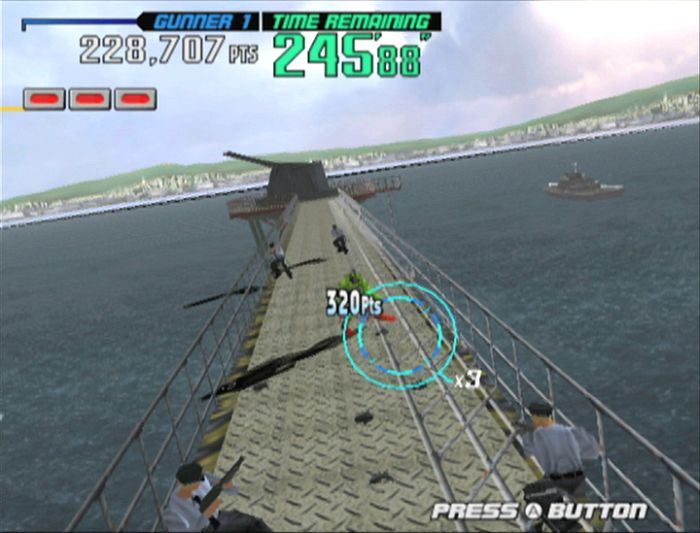 Earning scores in either title will contribute to your overall ‘Police Rank' in the game, the higher rank you achieve overall will unlock new weapons to be used in the titles as you proceed; heavy fire, wide-angle shots and rapid fire, all of which are selectable via the d-pad.

Additionally there are online leaderboards so that you may compare your performances with players around the world, but this is merely nothing more than e-peen waving and serves little purpose other than trying to lengthen the gameplay of a relatively short title. Now, as these titles were originally 4:3 aspect ratio titles, the dev team have used some witchcraft in order to accommodate more modern widescreen television sets. While the original 4:3 versions are available to play, there are expanded 16:9 versions of the games to play which are on by default, while the viewing area of the games are stretched out, your target reticule still remains in in the 4:3 borders of the original aspect ratio.

What this means is that you are unable to aim or shoot at targets at the edge of the screen, while enemies can still shoot you, projectiles from the edges will not register as hits. While this is a handy feature, it's hard to differentiate whether projectiles came from beyond the 4:3 border or not during intense firefights.

Overall, this will probably appeal to younger gamers who just enjoy playing anything on their consoles, older generation users may feel disappointed that this title was not given a true overhaul that it deserves. One for the rental/pre-owned shopping list. 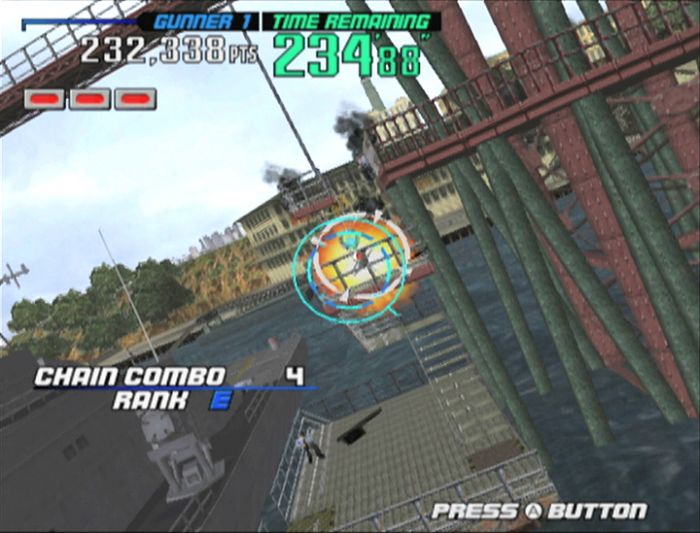 Overall, this will probably appeal to younger gamers who just enjoy playing anything on their consoles, older generation users may feel disappointed that this title was not given a true overhaul that it deserves. One for the rental/pre-owned shopping list.