When I was younger, whilst in a field, I used to sit on my Dad's lap and steer our car whilst he operated the pedals. Think of Guns of Icarus Online like this but instead of my Dad and I in our little car, think four players in a flying boat mounted with multiple guns, firing at other ships which are equally matched. It's essentially the same thing.

Created by Muse Games and funded by a Kickstarter project, Guns of Icarus Online is set in a post-apocalyptic steampunk universe where Zeppelin-esk ships rule the skies. Each ship is manned by up to four players who choose from three roles, Captain, Gunner or Engineer. Achieving the right balance of crew, teamwork and skill is key in this game. Without it, your ship is likely to fail.

The roles are fairly self explanatory: the Captain pilots the ship, the Gunner shoots the guns and the Engineer repairs and improves the ship. As you may expect, these roles aren't set in stone and it's very rarely that I will sit idly by on a gun whilst the ship is going belly up!
Each role also gets to choose from three special abilities for that role: Captain's get devices to aid them in flying, Engineer's get tools to repair and buff the ship and Gunner's get special ammunition. The Captain can also choose which ship that his team will be flying in and which guns are situated on their ship. You can probably start to see why teamwork is a must in this game!

Once on a ship, you can use either text or voice chat to communicate with your team. This is a must because without communication, the entire team is operating as solo players. The Captain is flying towards enemies, hoping that a Gunner is in the right position and an Engineer is on hand in the right places. It's great how much people get into this game though, the community is, on the whole, quite vibrant and friendly and it's not long before you'll find yourself "Arr"ing and singing sea shanties as you obliterate the opposition. Yo ho and up she rises! 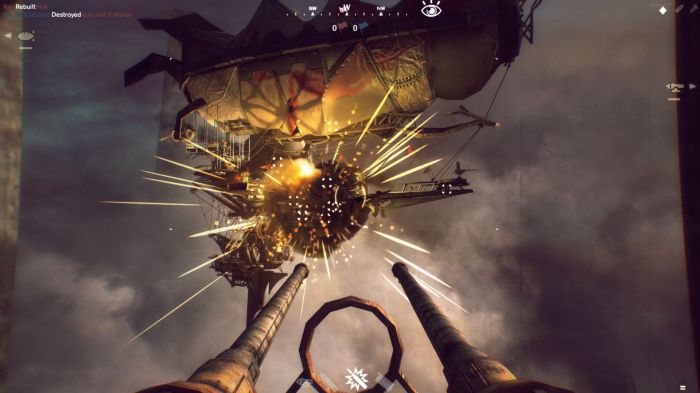 Matchmaking is fairly simple. There's a lobby where you can choose which games to join. At the moment you can't have pre-formed teams but Muse Games has promised this is coming. Until then it's not too difficult to get together with your team in a game. There are a variety of maps to play on and different maps hold one of three gametypes, Team Deathmatch (kill ships to gain points), King of the Hill (hold a capture point for the longest) or Resource Race (hold multiple capture points for the longest) as well as different amounts of ships for each. If you're not too bothered about any of this, there is also a Quick Join option.

As I mentioned earlier, the Captain can customise his ship to a certain extent by changing up the guns and the type of ship but there is further customisation to make your seadog your own. You can choose whether they're male or female, eye, skin and hair colour and then, if you so desire, purchase clothes from their store to further show your independence. The prices to me seem a bit expensive ranging from $1 to $6 but the range of clothing goes from a pair of goggles to a luxurious uniform. The prices do a good job of mirroring how good the clothes look.

Guns of Icarus Online is not only a fun game, but it's beautiful too! Sure, it has a few animation problems here and there but for me, they didn't really draw away from the immersiveness of the game. All the ships look amazing, as do the guns and the players. The landscapes are great and offer very different play styles depending on which you are playing on. Some have more clouds or sandstorms whilst others have mountains and pillars. The detail, although not A-Class, really keeps my eyes happy whilst playing this game. Not only is it very satisfying for moral when you destroy an enemy ship but watching it explode into a thousand pieces boosts that! 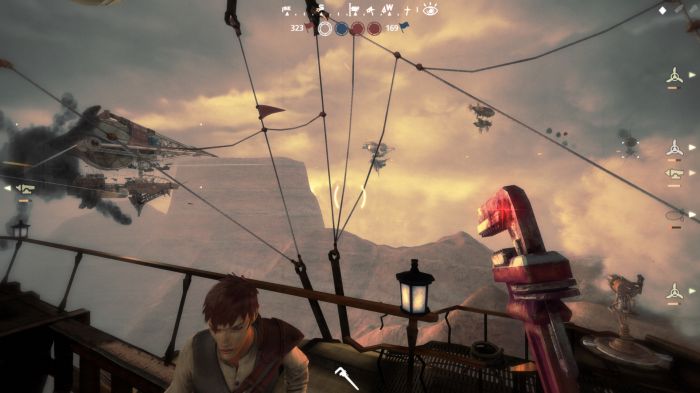 Overall, Guns of Icarus Online is at it's heart, a team game. As long as you are with other players that will get into the spirit of the game and communicate cooperate, you're going to have a whale of a time playing this game! It's aesthetically pleasing, fun to play and before you know it, you'll have lost a whole evening to it! Now what are you waiting for? Get aboard you landlubber!

When I was younger, whilst in a field, I used to sit on my Dad's lap and steer our car whilst he operated the pedals. Think of Guns of Icarus Online like this but instead of my Dad and I in our little car, think four players in a flying boat mounted with multiple guns, firing at other ships which are equally matched. It's essentially the same thing.

Sounds like a marmite game. Lovers and haters but not many people saying it's 'ok'.

Sounds like a marmite game. Lovers and haters but not many people saying it's 'ok'.

Yeah, I agree. I played it for hours and hours but now, I don't really touch it. Don't get me wrong, it's a great game but it's the sort of game that after a while, unless you have a solid crew, you don't tend to play. Sort of like COD Zombies.
Reply 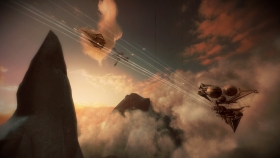