Full disclosure, I’m a huge sucker for visual novels--the weirder the better. So unsurprisingly, when I heard that Hatoful Boyfriend was getting an English translation, I jumped on it.

For the uninitiated, Hatoful Boyfriend is a high school dating sim, where players take on the role of Hiyoko Tosaka as she pursues any one of eight of her classmates. Who happen to be pigeons. Oh yeah, did I mention Hiyoko attends an all-birds school? Because she does--she's the first ever human student at St. Pigeonation’s, the world’s premier school for gifted birds. Her potential love interests all fall into usual dating sim tropes: the childhood friend, the kind teacher, the ladykiller, the haughty rich kid. 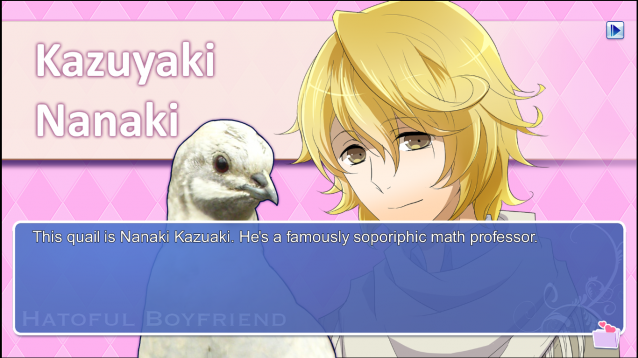 Hiyoko’s acquaintances are all birds of the dove family (such as a fantail pigeon, a rock quail, a mourning dove), but through “advanced visualisation software,” players have the option to see them as anime-esque boys during a CG for their first meeting. After that, regardless of what options the player picks, they’re stuck talking to (and romancing) a bird.

But don’t let the pink hearts and pastel color palettes fool you; there are deeper things at work in Hatoful Boyfriend and St. Pigeonation’s. Both have a darker side which only becomes apparent with the game’s secret route, unlocked after completing all the others, called the Bad Boys Love ending (or should it be Bad Birds?).

Hatoful's biggest accomplishments are firstly how on-point it is as a satire of the dating sim genre, and secondly its ability to convince the player that, despite all the niggling hints and pieces that don’t quite fit, that’s all it is--a dating sim. And in the interest of preserving the game’s excellent sense of pacing, I won’t be discussing the BBL ending in great detail, despite its prominence as arguably the “true” ending to the game. Some things, after all, are best discovered on your own. 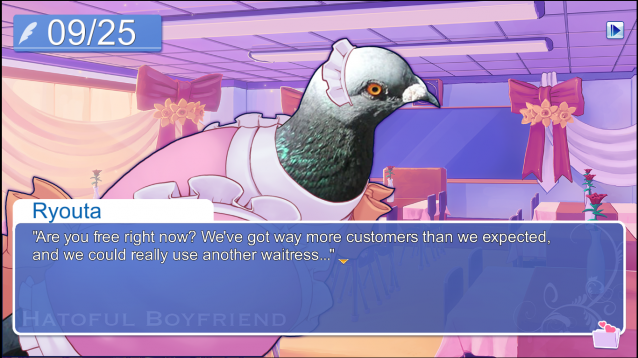 Despite its absurd premise, Hatoful  displays a surprising amount of depth in its development of characters. While the cast all slot neatly into one trope or another, Hatoful takes the time to flesh them out. One of the game’s biggest delights is simply watching how characters’ stories intersect across the game’s nine major routes. Although the game is a clear satire, it doesn’t use it as an excuse to cut corners in storytelling; if anything, Hatoful takes it as a reason to dig deeper into its own world-building.

Details that at first seem like they rely on a willful suspension of disbelief--Hiyoko never interacting with other humans, birds’ role as the apparent dominant species--are explained by the game’s end, and usually in a surprisingly clever fashion. In fact, Hatoful  does one of the best jobs tying up all its loose ends out of any visual novel I’ve played in a long while. As a result, the game is surprisingly immersive.

It also packs something of an emotional punch by the game’s end. Admittedly not on the same level as something like The Last of Us, but far more than you would expect from something that uses the tagline “An Avian Love Story.” The BBL route in particular, which is where the vast majority of Hatoful’s worldbuilding is finally addressed, displays a surprisingly wide range of emotional moments; not the least of which is the feeling of horrified disbelief that dogs the entire route.

While it may seem strange, Hatoful is a game that is best experienced by jumping in headfirst without too many questions and simply letting the game take you where it may. It’s a fun play, regardless of your opinion of dating sims, with some downright flawless execution of its storytelling. 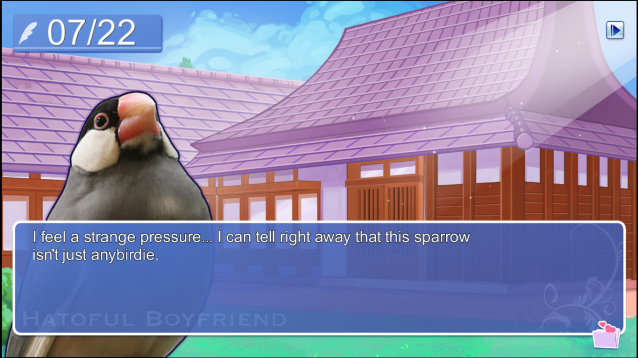 That said, as someone who is perhaps overly familiar with the visual novel genre I found the actual user interface of Hatoful Boyfriend to be bare bones at best. Tools which I generally took for granted--the ability to skip just text that’s already been read, toggling the text box for screenshots--are noticeably absent. While it doesn’t impede enjoyment of the game, I certainly found the need to keep a sharp eye in case of changes in the text while I blurred past it frustrating by around my fourth or fifth time playing through the main route; and given that like most visual novels Hatoful relies on multiple playthroughs, it felt like an oversight on the developers’ part.

In the end, Hatoful Boyfriend is still a surprisingly engaging experience. The characters are all likeable, with well fleshed out relationships between them. The various routes build nicely into one another, and by the time players reach the BBL route they all come together in an impressive, if not totally satisfying ending.

Don’t let its strange premise fool you, Hatoful Boyfriend delivers a masterful satire on the dating sim genre and a thoroughly enjoyable experience all the way through. Underneath its absurd setting, Hatoful boasts a well thought out world, enjoyable characters and clever writing that give the game its quirky feel. Plus, birds in maid outfits.