World of Tanks, World of Warplanes, World of Warships, World of… Helicopters! Although Heliborne isn’t produced by Wargaming, the developer behind the popular free-to-play multiplayer games in the “World of Some Combat Vehicle” series, it definitely feels inspired by their success. Heliborne dedicates itself to the military helicopter, a whirring air machine built for low-flying combat and the occasional meme. It’s a reasonable addition to the online war simulator genre, as the alternate choice of submarine warfare isn’t a very exciting prospect. Bringing forth a healthy roster of various choppers, Heliborne takes to the skies with all kinds of helicopter goodness. 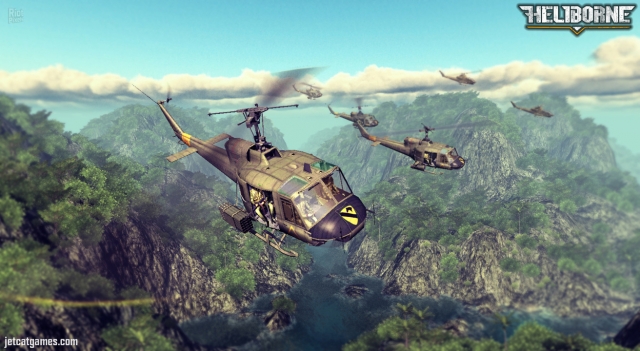 Upon entering the game, I began to question my ability to properly fly an attack helicopter. Such a task is quite intimidating for a novice pilot like myself. Without a proper tutorial to learn even the mere basics, I was forced to jump right into the fray and test my natural skills without any training whatsoever. Granted, there are a few written tutorials for Heliborne available online, but who has time to read those? As someone who isn’t remotely close to a helicopter enthusiast, I was surprisingly able to get a feel for the basic controls after just a few minutes. I have yet to master any advanced maneuvers, but getting around each area is straightforward enough. Still, you would expect a tutorial mode for a game that revolves around skillfully operating a complex machine.

Each helicopter controls quite well and is said to be historically accurate in all aspects. I am sure many appreciate the effort that was put into Heliborne’s realism and detail, but I personally would not know the difference. Helicopters from four distinct periods ranging from the 1950s to 2000s can be researched and unlocked through a credit-based system. There are no microtransactions, and currency can be earned through completing objectives in the game’s multiplayer. Different lineups of ‘copters can be hand-picked by the player to a limited degree, though you aren’t allowed to mix different time periods or factions.

The game’s single-player mode is disappointing to say the least. Presenting only eight bare-bones missions and zero progression, it feels quickly slapped on. Player demand most likely lead to its creation as a sort of obligatory effort to introduce a standalone campaign. Heliborne is meant to be played with others, and this is obvious. Single-player is riddled with various bugs, weak voice acting, unclear objectives, repetitive gameplay, and a lack of story. One mission forces you to idle for seven minutes as the timer expires in order to complete it. In short, do not consider Heliborne a single-player experience.

On the bright side, I had a pleasant experience with Heliborne’s multiplayer. The game boasts a solid community built around hardcore players, but everyone is very welcoming toward anyone new to the mechanized combat simulator genre. It’s difficult to find a match at any time other than the evening though, probably due to the playerbase being mostly composed of adults. Multiplayer itself consists of co-op or versus control point gameplay, with most matches lasting around ten minutes. Zones are captured by first clearing out enemy garrisons, then dropping off friendly troops. These matches are both engaging and friendly, really showing off everything that Heliborne has to offer. Heliborne is a great tribute to the helicopter’s contributions in modern warfare, while it focuses mainly on the helicopter itself, and not so much anything else. In some ways this makes the game feel unfinished, but you can be sure to find a beautifully crafted helicopter model awaiting your arrival. Thanks to some helpful players, I found myself enjoying the game for the most part. Heliborne is highly recommended for anyone interested in war simulators, but does not truly reach out to the casual action-seeker with its various shortfalls.

Heliborne is a great tribute to the helicopter’s contributions in modern warfare, while it focuses mainly on the helicopter entity itself, and not so much anything else. In some ways this makes the game feel unfinished, but you can be sure to find a beautifully crafted helicopter model awaiting your arrival.

I really like this game. It's a shame there's not as many people playing it as there should be, it's really good fun.

Yes, I enjoyed the game for the most part. It makes for a entertaining multiplayer session with friends.

Nice review of my favourite game. Let me add that most of my PvP games last between 30 and 45 minutes (which is the maximum). There're two different game modes and tactical aspects like dropping special soldiers wherever you want on the battlefields.