It's difficult to put into words everything that Horizon Zero Dawn is. Not because of a lack of words, or lack of content (albeit that isn't taking into account the game's massive length), but because finding several unique ways to say the word "beautiful" will make it a challenge. That being said, let us begin.

If I had to describe Horizon Zero Dawn in the shortest amount of words possible, I'd say it's a piece of art. Oftentimes you can find people arguing whether videogames should be an art form or not, and to all of those that disagree with this statement, I invite you to play those games that truly excel in any of their areas. Horizon Zero Dawn does so in many of these. With visuals that captivate the player and attention to detail that shows just how much care the developers put into crafting this game. But, I'm getting ahead of myself, so let's start from the very beginning, the story.

Horizon Zero Dawn is set in a post-apocalyptic world that has been overtaken by machines. Play as a member of the Nora tribe, Aloy, as she discovers a piece of technology called the Focus that shows her so much more than the eye can see and accompany her throughout her journey to uncover the answers that she seeks. Story-wise, Horizon Zero Dawn does wonders. The characters present throughout the game have struggles just like any other, quickly captivating my heart as I further interact with them and learn about their story. None, however, match the depth that Aloy represents throughout the entire game.

Aloy is flawed, and that's what makes her so great. The developers behind the game admitted that they didn't care if she was a female lead or not, but only what her story would represent and how it would unfold best, and it is one of the main driving reasons behind my adoration of Horizon Zero Dawn. Although she is sometimes snappy, the story behind her actions speak louder than each of the words she says, and it was my favourite point of the story.

I didn't care for a post-apocalyptic tale about machines taking over and culture devolving back into more primitive eras beyond Medieval times, and it's exactly that which proves how engrossing the game can be. I'm not big on sci-fi, I don't care for machines, cyberspace, or anything of the sort. But as I played through the game, I couldn't help but be invested in what would happen next. And it wasn't only the main quest, I wanted to try each of the side quests and see where they lead — that's exactly what open-world games should be, inviting you to explore deeper into each of the stories, making them nearly as enticing as the main one. 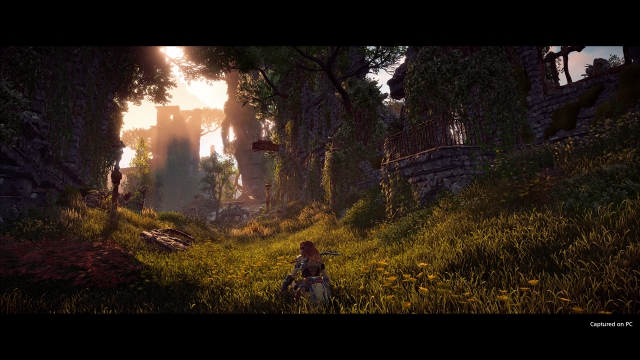 The graphics are beyond compare, with gorgeous HDR that truly had my jaw dropped throughout each of the areas. The way the lights of the machines light up at night is something unparalleled by most games I've played — quite the feat for a game released four years ago. And each of the beautiful mountainy areas had me finding different places using the photo mode to try and capture just a fraction of the beauty the game had to offer. Although it was incorporated poorly, I still used the mode to take each of the pictures it allowed me to.

I loved walking around the world, finding high vantage points, and overlooking the gorgeous landscape sprawled out in front of me. I loved looking and knowing that out there were several things to look for and collect. Apart from the HDR, however, Aloy's animations as she passes different terrains were nothing short of immersive and beautiful.

The game plays just as beautifully as it looks. Aloy is equipped with a bow & arrow as she fights her way through machines increasing in size and threat as the game progresses, or even human foes that block her path. The fighting is wonderfully incorporated as the player has to use several means of engagement for each machine. Their weaknesses are exposed by the focus, and it is up to the player to exploit them and make the fight easier or perish while adamantly choosing one fighting style. 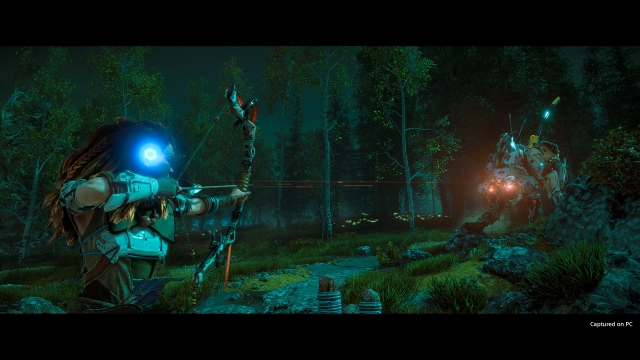 The variety provided by the game of traps and weapons is not too vast, but each weapon plays and feels completely different and it was all I cared for. I loved engaging in combat after setting traps around an area and luring the machines to fall for each of them. There are several ways in which Aloy can enter the fight, be it by picking off each of the foes through stealth, setting up the traps, or fighting head-on. Some felt more favourable than others, but that didn't mean that it was more or less fun to do so and having to shoot the weak spots for machines was an absolute joy, seeing as the big chunks of metal flew off and knowing that was salvage that could be picked truly added to the experience of huntress versus the world. Without a doubt, despite how many areas the game excels in, one of the greatest highlights Horizon Zero Dawn has is its gameplay and combat.

Horizon Zero Dawn sparks absolute glee whilst playing and traversing the world. If not through its great storytelling and character development, then the gorgeous landscapes and plethora of things spread out for the player to explore and enjoy. At no point in the game did I ever feel lazy to do any of the quests because all of them were equally fun, and it urged me to want to do it all, so much so that I actively avoided fast travelling in favour of exploring and just walking everywhere on foot as I took in the landscape and story. I can confidently say that Horizon Zero Dawn is a must-try for just about anyone, a statement I don't often say.

Horizon Zero Dawn truly expresses how videogames nowadays are an art form, if not only through its visuals and storytelling, then certainly through its expertly incorporated combat. A glee-filled experience through and through.

Why Representation is Important in Gaming

Is Horizon Zero Dawn Any Good?