As a fan of match-3 games, breasts, and bargains, of course I picked up HuniePop quite some time ago, as it’s often on sale. So when HuniePop 2: Double Date was announced, I was quite looking forward to it and the new characters it would bring.

I didn’t follow along with its development, so it’s only since playing it that I became aware of some controversy surrounding one of the characters. Long story short, the character Polly is a transgender woman, and idiots have issues with that. It seems that HunieDev wanted to include some trans representation, and after some initial outrage from the aforementioned idiots, proceeded to make the worst decisions. It’s a whole thing. As it stands, when you start a new game, it asks for your gender, an icon, a difficulty, and whether Polly’s junk is an “innie” or “outie” (these options can all be changed). These are terms I’ve heard in reference to labia, so I didn’t realise that it was actually code for “does Polly have a penis?” 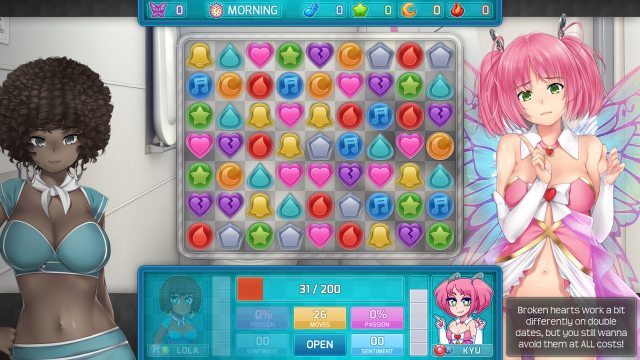 It’s bad representation if you have a character that’s optionally transgender. Yes, the player may not want to have sex with a transgender woman, but your character technically never does have sex with Polly, making the option even more redundant. Every sexual encounter featuring Polly keeps her genitals covered, whether she has a penis or not.

But enough about HuniePop 2: Double Date’s awful trans representation, and we’ll just gloss over the fact that Nora is a Latina maid who has a criminal record and deals drugs. All of the characters are stereotypes, and harmful in their own ways. At least the characters are only a small part of this dating puzzle game! Oh. 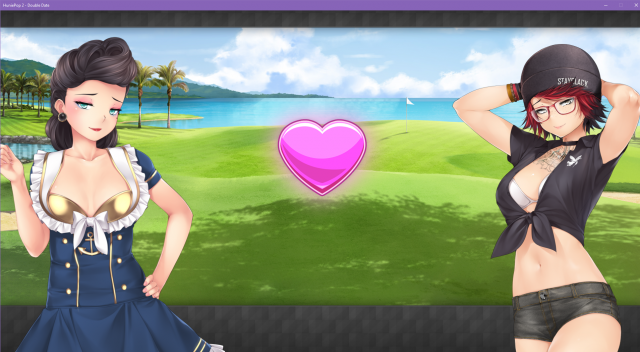 The story is that these two ancient gods have been awoken by their menstrual cycles AKA “Super Periods”, and so you have to travel to the island of Inna De Poona to stop them destroying the world. You achieve this by having threesomes, which helps fairies get their wings. Yes, unlike the previous game you’re not trying to sleep with women, you’re trying to sleep with two women at once! 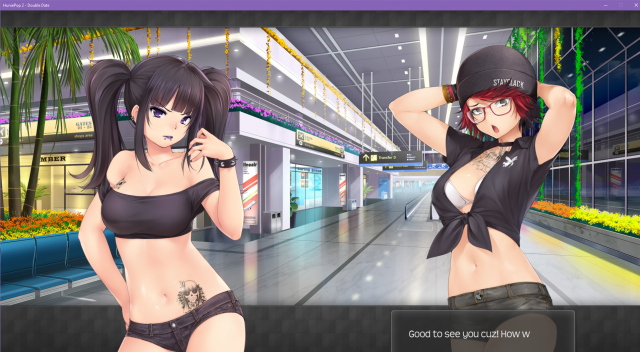 Dates in HuniePop 2: Double Date are exactly the same as HuniePop, taking place at a particular time of day (morning, afternoon, evening). You match three or more tokens on the board by dragging one token across to join two or more in a vertical or horizontal line. Each lady likes and hates a particular colour match, and each match uses stamina from the lady you currently have selected. Swapping between them to recover stamina is key to a date going well, and you scoring enough points to win.

To make things easier, you can visit the store to buy food, date items and gifts between dates. Food alters your date stats (such as giving you more moves), date items make things easier by changing things during a date (such as increasing tile drop rates), and gifts to improve how much attraction each match gives you. But beware, each lady has emotional baggage which you uncover as you progress. It’s not stated in-game, but these actually negatively affect your dates - for example, one character will deduct points just because you swapped to the second.

HuniePop 2: Double Date gets progressively harder after each date, no matter if it’s a success or a failure. That means that you can fail several times, and it will just get more difficult. Of course, it tries to assuage this by rewarding you post-date, so that you can buy the ladies more stuff to try and help you win. However, the store only refreshes in the morning, so you either have to lose three dates, or just skip time in your room, if you need more items. I did never find myself lacking the means to buy things, though.

The highlight of the game is the voice acting. All of the actors give their (problematic) characters some surprising depth, except for Lillian who is a half-note character. Yes, she doesn’t have the depth required to make it to one-note, oh my gawd! Kyu’s voice actor (Jaclyn Aimee) is a particular treat, and I adored it when she came on-screen. The music is decent throughout, and varied enough to keep from being annoying. Some if it was even catchy! 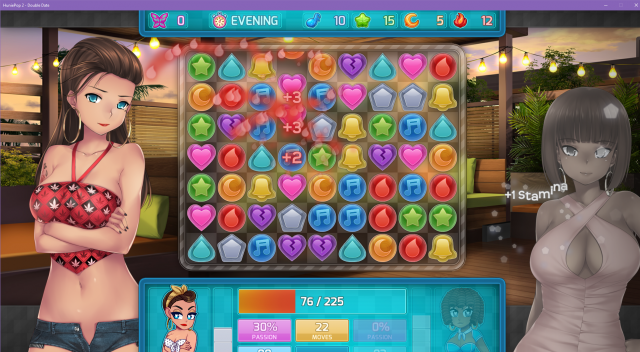 Graphically, HuniePop 2: Double Date’s art style is vibrant and nice to look at. The outfits each lady wears are varied, and I enjoyed unlocking them as the game progressed. The post-sex scenes (because you don’t get to see the actual sex) are decent, and can be censored with clothing if you wish. Also, if you choose your gender to be a male, but don’t want fluids everywhere, you can switch those on and off.

HuniePop 2: Double Date is a great follow-up to HuniePop, I won’t deny that. However, it doesn’t really go far enough to get away from its problematic roots. And as I mentioned right at the start, it somehow makes things even more problematic than the first game ever could have been.

This was reviewed using the DRM-free version available on Nutaku.net.

It could have, and should have, been so much more than just a bigger version of the original. The new characters would have been problematic in 2015, let alone 2021.