Hunter Girls is a pixel-graphic runner game, in which three girls, each with their own motivations, go on a mission to rescue Prince Alex from the evil villain Kelthram. Warrior Agnes just wants the reward money, archer Kim seeks revenge for the death of her brother, and sorceress Flora wishes to get hitched with her new royal crush. Travelling through a forest, a cave dungeon, and a castle, they must use their skills as a team in order to overcome their foes and move forward. The story is mostly told through subtitled scenes, and although the translation was rather badly done, the intent of the story at least managed to show through.

You know you’re in for a ride when a game has generally positive scores on Steam, but you’ve already noted two weird design choices by the time you reach the main menu. First, there is no option to exit the game – you must either press the usual X in the top-right corner, or alt+F4 your way out. Second, on the subject of options: there are none, aside from a one-time screen asking you to set your volume for the entirety of the play session. Well, I suppose that’s not technically accurate; there are two buttons on the screen that allow you to switch between fullscreen and windowed modes, too.

The first thing that happened when I started a new game was that I was forced to shield my eyes; the picture shown was very bright, being in black-and-white style (with far more white than black). This is apparently what the game refers to as a “cutscene” – unlike most games however, the cutscenes in Hunter Girls are all pictures in this same black-and-white style, with a huge wall of text overlaid once you hit the “play” button in the corner. To make this worse, it can be hard to see the black text on the black outlines. Outside of the so-called cutscenes, graphics are pixel-style and look merely OK. 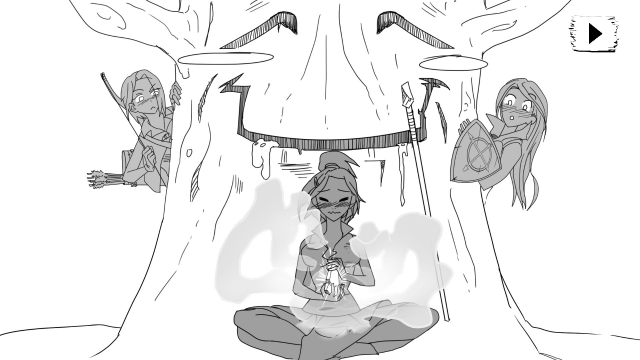 MY EYES, THEY BURN!

Another very noticeable visual issue was the frame rates. For a very simple pixel game with a small download size, you’d think there would be almost no issues with how well it runs, but more than once I experienced significant drops in FPS. It started out with just the backgrounds, but quickly affected the important foreground too. Quitting to the main menu helped a little the first time, but only a full restart of the game restored proper smoothness to the frame rates. I’ll note that whilst I don’t suffer motion sickness, even I started to feel uncomfortable at maximum jitter.

In terms of the actual gameplay, Agnes starts off by herself, and as she travels through the forest section she encounters the other two characters in cutscenes, both of whom promptly join her as soon as they learn of Agnes’ quest. The major aspect of the gameplay is the precision required, for both skill usage and jumping. Being off by even just a couple of frames in either direction can easily result in death. In addition to the precision, there is a limited amount of resources for each girl, meaning you can’t just spam your skills. You will mostly learn when to use each skill just by playing – and although in theory you could reflexively react to each enemy and obstacle, the reality is that you’re more likely to instead end up memorising the level layout, and when to press each key, thanks to the many, many deaths you will incur.

There are a small handful of controls: each girl has two keys assigned to their skills (C and D for Agnes, X and S for Kim, Z and A for Flora) as well as a jump (spacebar) which is shared between them all. In the incredibly likely event that you die, R will restart the current level, and Esc returns you to the main menu. There are three main issues I found with the controls, however. Firstly, the girl-specific keys just don’t feel intuitive, especially once you gain usage of the second key for each girl. The second (and related) issue is that due to the previously mentioned lack of options, you cannot change the keybindings. The third – and biggest – problem was that several times the game decided to flat-out ignore that I had even pressed any given button! In a game where precision is highly important, this was incredibly frustrating whenever it happened, as it always resulted in making me die and return to the level’s start. 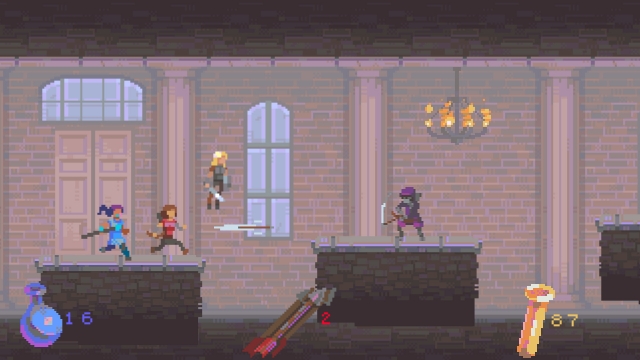 The precision – and resulting difficulty – of the game has already been mentioned previously, however I would suggest that this is actually one of the somewhat redeeming qualities of Hunter Girls... depending on your skill in games such as this. Speaking as a relatively experienced player, I didn’t find it difficult enough to feel oppressed, but it was testing enough to give me some measure of satisfaction when I completed a level in only a small number of attempts. Players that find such games harder will naturally have much more of a struggle, potentially even to the point of simply not having fun.

Another mostly positive aspect of the game is the audio. The music played throughout almost the entirety of the game conveys a distinctly fantasy vibe that complements the setting. This changes only for a couple of cutscenes, these being more whimsical both in sound and story. This said however, the music for each level is preset, meaning that every time you restart the level, the audio does too. This can get a little jarring when it is happening a lot, especially as there doesn’t really appear to be any reason to not have a looping track.

Finally, let’s talk about the length and pricing of Hunter Girls. For splashing out about the same amount of money as for a pint at your local, you’ll likely be rewarded with a similar amount of satisfaction here. The game took me just over one hour to complete, with at least a quarter of that being spent reading cutscenes and checking for post-credits content (of which there is one more picture, although no text this time). At a cost of just £3.99, this seems passable, although even then a sale price might suit your experience of the game better.

Hunter Girls has an unfortunately high number of flaws, but there are at least a couple of positive aspects to somewhat make up for the failings.