Having been born in the ‘80s, I have a tendency to be drawn to games that are inspired by movies and media from that decade. So when I saw the huge roster of 60 characters in Hyper Parasite, a lot of them are influenced by '80s movies, I was instantly drawn in. Would this rogue-like game that has you playing as an alien parasite taking over the bodies of Earth's citizens be a fun and unique experience? Or would it be forgettable and added to my pile of unplayed games? 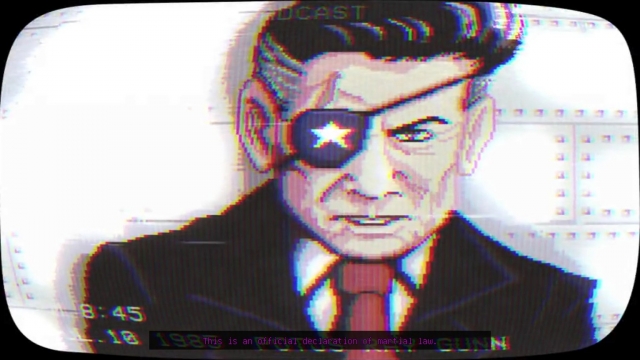 As soon as the game starts you are greeted with a scan line TV playing an urgent message from the President. He declares that the Earth is under attack and the alien parasite responsible has plans of taking him over so that they can release nuclear weapons against the Earth. He declares martial law and states that everyone, including inmates, should arm themselves and head to the streets to attack the parasite and defeat them at any cost. So armed with crazy weapons including shopping carts, laser guns, basketballs, claws, boxing gloves and more, they head to the streets. You may think you would be playing as one of these civilians fighting to protect the planet, but instead you actually play as the parasite who is trying to take over the planet. 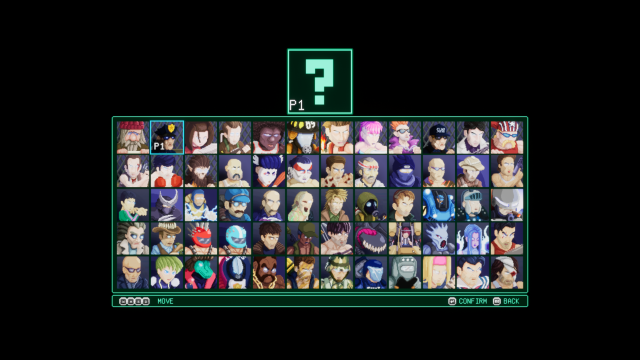 After this message the title screen with a classic ‘80s feel appears. You have to decide how much of a challenge you are up for so you choose between Born in the ‘80s and Wrong Millenium pictured with a soother. If you choose the first option, like I originally did, you are in for a more challenging experience than if you chose the soother. You start in parasite form and it’s up to you to find a host body to take over. The easier option gives you the choice of 60 characters to select from to start. There are characters inspired by a bunch of classic movies like Alien, Robocop, Terminator, Rocky, Scarface and other popular characters like Super Mario, Mr. T, Shredder and Hulk Hogan. These will be the host bodies that you will be taking over. Each of these characters has their own starts like HP, base damage, special damage, resistance, dexterity and luck so choose wisely. If you decide you are up for more of a challenge, choose the hard mode and hunt down the hosts all on your own. 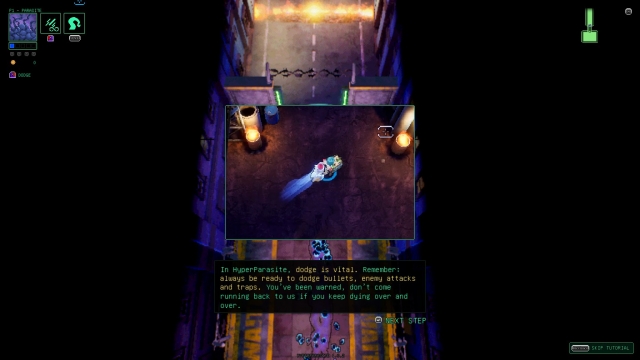 Hyper Parasite starts in a run-down, desolate city in either downtown or the outskirts. Each time you play this will be different so it will be a surprise. This game is a twin-stick shooter, so one thumbstick will control where you are walking and the other controls what direction you are facing and shooting, so you will have to use both together to move your character and target your enemies. Each of the host bodies you take over has a primary and secondary attack, so depending on your attack style, you will favour some characters over others. I have to say attacking people by ramming into them with a shopping cart is very rewarding so taking over a beggar with his cart is always fun. When an enemy is about to attack you, they glow yellow so you have a warning to get out of the way. Most of the time I found constantly running while trying to attack your target was one of the best methods to stay alive. If you stand still you are a sitting duck and you will be attacked by multiple citizens at once overwhelming your host. 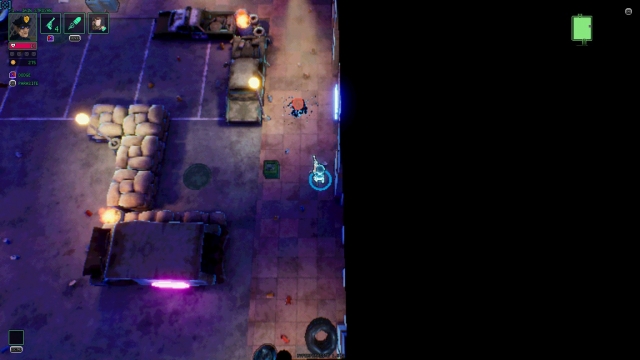 While you are exploring the city you may find intergalactic puddles that you can absorb to get an upgrade. You can choose what to power up between Parasite Lives, Attack Upgrades or Defense Upgrades. This will level up your parasite, but if you take too much damage and your host body dies you have to rush to take over another host to continue battling. There aren't many things more frustrating than spending twenty minutes levelling up your host just to have it pulverised within three seconds just to be sent back to the beginning to start all over again. Hopefully you learned something from your previous attempts so you can be at least a little more successful in your next run. 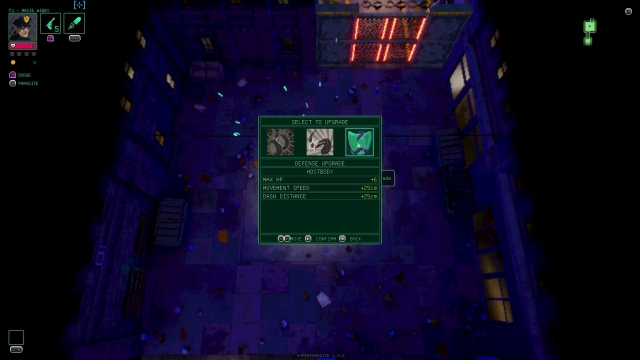 There is a creepy storage room in the city that houses all of the hosts you have collected in your previous run, so if you have money you can buy that character to take over. The bad thing is money is hard to come by in this game, so it will require a lot of grinding to get the funds that you need. If this doesn’t sound fun to you then I would suggest playing on the easier mode where you can just pick your host right off the bat. Though you will still need to get money to purchase power-ups at Wito’s store for your character, so either way some grinding will be required. The music in the game feels like it is inspired by industrial rock, so it matches the dark and dismal look of the levels. The graphics for your character and your enemies aren’t the best. The game has a top down view, so all the characters are very small, and all you can really make out is the glowing outline. Items you find spread out in the level like vehicles, trash bins and crates are all destructible, then if you are lucky money will be the reward for destroying it.

If you enjoy challenging rogue-like games and cool ‘80s references Hyper Parasite may be worth checking out for you. There is a cooperative mode available, so you may find more success teaming up with someone to battle against the humans. Be prepared to have your parasite destroyed a lot though, there are a lot of well armed citizens searching for vengeance, so they won’t give up that easily.

Hyper Parasite is a very challenging rogue-like game that features a lot of cool ‘80s inspired characters and a cool mechanic that has you playing as a parasite taking over different host bodies to survive. The game might not look great but is still addictive to play.