I, Zombie is a short, top-down puzzle game where you play as a zombie who is hellbent on turning every civilian and military man in the vicinity into one. You know, as zombies do.

In I, Zombie, players are tasked with killing every human in each of the 30 levels present in the game while controlling everyone that gets turned with three different commands: attack, stop, and follow. Each of them does exactly what you'd expect them to do, and you must use these commands to kill military men armed with rifles that will open fire once they catch wind of you.

The game scores how well you do by checking how many zombies are left alive. To get the perfect rating of three stars, you must keep all of the humans you turned alive until everyone is dead, which proves to be a harder and harder task as the game progresses. 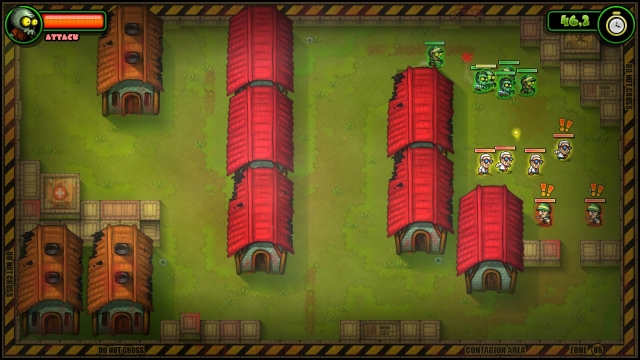 The puzzles aren't particularly long, and the game in and of itself can be completed in just about an hour or so, depending on how determined you are on getting all of the achievements. I myself was capable of finishing the game in just under two hours with every achievement.

Although this might sound disappointing, the levels can be incredibly fun to play through, and it should make for an easy 100% achievement to acquire for anyone that is interested, due to most of them being completing the game aside from some speedrunning achievements present throughout the game.

Although I, Zombie is incredibly short, it is quite fun. However, my favourite part of it was playing it to get all of the achievements present, due to the aforementioned speedrunning achievement. Instead of having the player try to finish the game in a very short period of time, the speedrunning achievement tallies up the shortest time for each of the levels present in the game to judge how long it took to finish. Optimising the time on the levels that took the longest is actually a very fun experience and a different take in speedrunning achievements that I was very appreciative of. As of writing, I was capable of reducing my time in the summer levels to 14:12, with many optimisations left to be made and 6:13 to the winter levels. 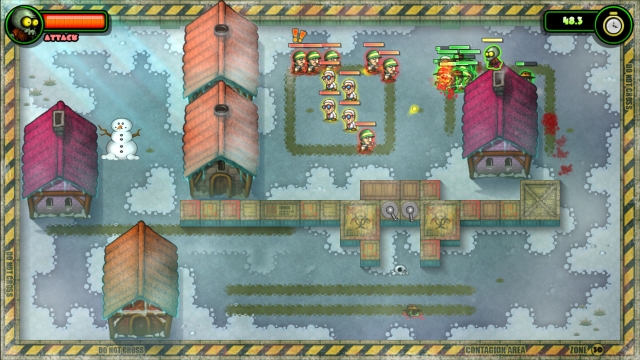 The levels eventually boil down to using the same techniques present that you've learned to pass the later ones, such as using corners to your advantage to sneak up on unsuspecting soldiers. Although this might sound boring and annoying, it doesn't get to be so given how short the game ultimately is, so instead of it becoming repetitive and boring, it feels just long enough for the game to be enjoyable.

Although the game has incorporated the Steam Workshop feature, it is unfortunately not very full of fun levels to play through. They are very straightforward, and nowhere near the quality of the original game's 30 different levels. That being said, I did heavily appreciate the option to check the levels out through a level select menu in-game that allowed me to download the workshop levels straight from the in-game client.

The graphics look something very akin to the games of yore in sites such as Newgrounds, with a very simple and easy on the eyes style that doesn't look horrid, but it's also nothing to write home about. The music is some of the most famous tracks from Kevin MacLeod which added a very funny undertone to the game as I chased the remaining civilians throughout the gore-infested world to the tunes of Sneaky Snitch playing in the background, or slowly setting up my zombie army in the corner of the house to sneak up on some soldiers with Scheming Weasel. 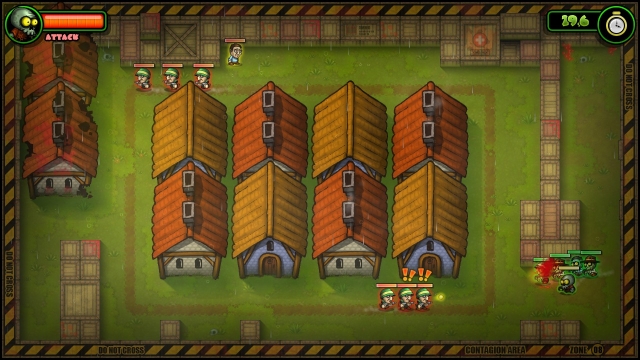 I, Zombie is a simple and short puzzle game. Although it isn't the most impressive in the bunch, it has some nice levels and interesting design choices. If the community levels had more depth to them and matched to the quality designed from the original version, this game would have a lot of replayability. Alas, its short campaign, simple puzzles, and lack of replayability options, if you have a good enough memory, make this one tough to recommend. That being said, if you have some money lying around and want to play a simple, fun enough, and short game, I, Zombie might be the perfect candidate.

I, Zombie (Reviewed on Windows)

I, Zombie feels a lot like a flash game from sites such as Newgrounds, and expecting that level of quality will net you a fun and short experience. However, that is the extent the game has to offer.