Infested Planet plays as kind of a bare bones, top down RTS game, which, while trying to introduce a handful of original ideas to the genre, falls short on delivery and execution, but still sets itself apart from the overwhelming competition. 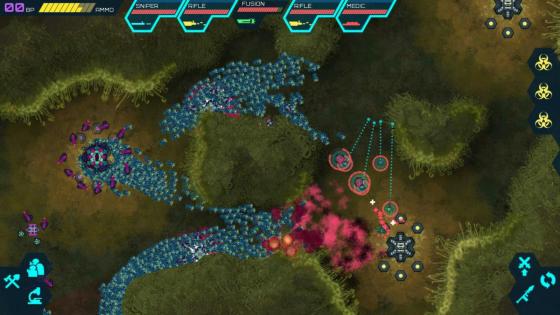 Personally, I've barely laid my hands on an RTS since Command & Conquer: Red Alert; it's a genre that, for me, is very long-winded and requires a huge amount of real time resource management which detracts from the fun aspects of the games. Infested Planet appeals to my RTS-phobia as it provides relatively short missions and basic base and unit management.

The first few levels felt so basic I felt like I was back playing Cannon Fodder again. Move – shoot – kill – win. Naturally, as each mission progresses, a new mechanic of the game is introduced and as a noob, I felt like I was being taken care of and gradually trained for dealing with the later, much harder levels. In no time I found myself splitting my troops up, defending my bases from all angles and dealing a fair amount of death everywhere I went.

Unlike most other games of this genre, you are only given a maximum of six troops who you can train to handle better firepower, assign them different jobs, and when you want to build a turret, for instance, you have to send one of them away and they have to construct it themselves - there's no automatic materialisation of units here. 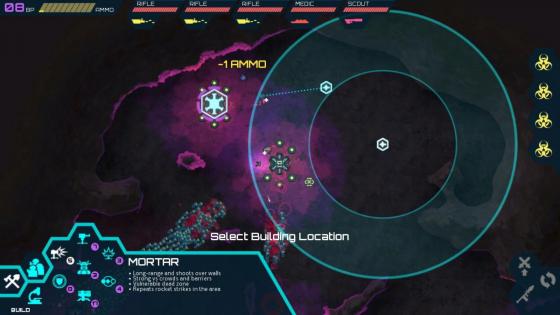 And the enemies, as the title suggests, are aliens - swarms upon swarms of aliens infesting the planet you've had the misfortune to end up on. From the start you and your rag-tag bunch of troops are horrendously outnumbered, but it's fortunate then that the aliens are very prone to disintegrating once a bullet touches them.

They hatch in their thousands from a single egg, and will continue to do so until you destroy it. This naturally leads to the fairly standard military move to cut the enemy down and advance until you can destroy the source, usually protected by nearby sentry turrets and the like. Of course, as the levels get bigger and you advance deeper into the Infested Planet, different enemy types make their presence known but with negligible distinction other than taking a few extra bullets to down, or dispatching your units with ever so slightly more ease.

The enemy on each randomly generated level will have a number of bases, and you must liberate each of them to complete the mission and move on. You must remember to defend each one you take, as the aliens can slip by you unnoticed and take one of their bases back. With each base you take you are awarded BP (Battle Points), and you can use this limited resource to purchase defensive artillery to protect your bases, or training your units to cut down the hordes with greater ease. I say training, but in reality your troops don't remember their training come the next mission, so really you're just arming them with a shotgun or a bazooka until they die or progress. 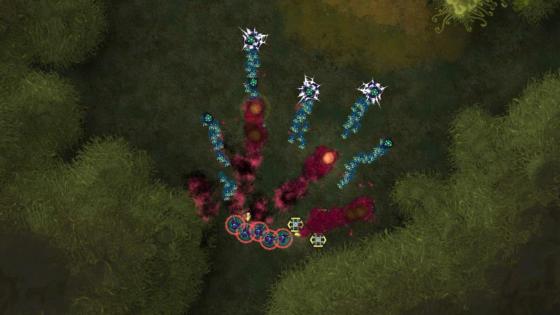 Which brings me to my first real niggle with the game. My only sense of progression came from subsequently grander levels, more bases and even more alien units. The newer missions granted me the option for 'one-time-only' buffs on my troops or my resources, costing hard-earned cash for up to a maximum of two, but my people just otherwise revert back to the machine gun toting frontline nonentities they were at the beginning of the game. The story advances (but is basic and uninteresting), but your troops do not. No levelling up, no customisation, no connection with them as people, just a few ways to tinker with their skills before they revert back to square one. It's a missed opportunity to progress the game and set it apart from other, bigger budgeted titles in the genre, as it's not normal to connect with your RTS troops and give them personalities, but with only having five regular troops it would have been nice to see them as more than just generic clones of each other. Protecting my minions from danger, caring about their safety and mourning their deaths would no doubt elevate the game to the high standards of XCOM: Enemy Unknown and State of Decay, but wouldn’t fit with the game’s necessary respawning mechanic. Regardless, even troops with any personable attributes is preferable to emotionless goons. 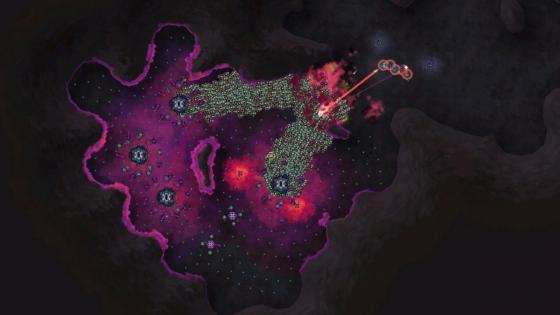 There is also the random aspect, chiefly the randomly generated levels and random upgrades the enemy begins each later mission with. Naturally this provides an unpredictable element to your skirmishes, which would normally be great, but on the odd occasion you'll find the best and your most useful buffs randomly unavailable to you, and the aliens get dealt the best and most difficult upgrades to defend against, massively putting the tide of battle in their favour. As this is random, you naturally have no control over it and seems needlessly unfair and injects a lack of skill into proceedings and places a bigger onus on luck.

The random level generation keeps things for the most part fresh, but will occasionally allow for horrendous levels where four or five enemy bases are placed very close together in the middle of hives, which gives them very quick regenerative powers. Oh, and only one path to get there, making it really difficult, occasionally near impossible at times, to progress.

But the niggles with the game distracts from its sheer accessibility and unique take on a much tried and tested genre. It's few versus many; it's take over, build and defend, rather than mine for ore and research. I'd hazard a guess that Infested Planet is certainly a game more for me rather than seasoned veterans of the Real Time Strategy brigade, as its relatively basic controls and commands, and sparse unit and enemy types, keep this from being just another addition to the genre, and aid it to stand out instead. Long, drawn out skirmishes are few and far between, and instead Infested Planet offers bitesize chunks of RTS and a little tower defense thrown in for good measure. 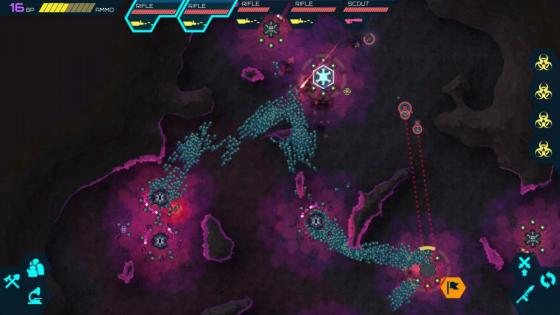 The graphics are purposefully nothing special, utilising a basic but colourful top-down approach with an almost neon feel, harking back to retro games and seminal sci-fi movies of the eighties. The glowing noiresque environment of the long caverns, and the oodles of luminous purple alien blood complements the tone of the game well, giving the planet and its inhabitants a great otherworldly feel. The basic approach to graphics is also in keeping with its basic (yet deceptively intuitive) battle system and general RTS style. On the surface it looks naff, but squint past the layers and you’re presented with something quite intelligent and beautiful.

The sheer joy of blasting through thousands upon thousands of enemies as you advance on their base is borne out through blood-splattered environs, though the fear of dying is never really present thanks to constant respawning until you lose all your bases, losing the would-be tense David versus Goliath mechanic.

I have to admit I didn't expect to enjoy Infested Planet, but I have come away from the experience feeling as though I'm not done with RTS games. It's very geared towards the newcomer, but has its own unique charm and original qualities that deserve more than a glance from experienced players. Though not as totally immersive nor as comprehensive as its counterparts, it's definitely a jack of all trades, and certainly worth checking out.

Infested Planet plays as kind of a bare bones, top down RTS game, which, while trying to introduce a handful of original ideas to the genre, falls short on delivery and execution, but still sets itself apart from the overwhelming competition.