I love a good match-3 game - the simplicity of them is very relaxing, whether it's popping bubbles or defending castles. Then there comes Ironcast, which puts a twist in the usually simple formula, turning a casual swapping game into a strategy game with match-3 elements.

It's hard to boil Ironcast down to one basic thing, as it throws many ideas at the wall. It's a match-3 strategy roguelike set in an alternate Victorian Britain with steampunk mechs. I’ve been interested in this since I heard about it in October, purely because of that one sentence: match-3, alternate history, mecha - it ticks some damned interesting boxes!

It's entirely possible to connect every single node

You take the part of a pilot of one of these mechs - the titular Ironcasts, named such due to how they are manufactured - after the French have launched a full-scale assault on England, several years into a war between the two countries. You have nine days to gather enough forces and upgrades to take on the gigantic foreign Ironcast coming up from Dover - which means you have time for nine missions. You choose which missions you take and they can be one of a few types. Survive a set amount of turns, defeat an enemy with a turn limit, survive whilst collecting supply boxes, or defeat an enemy without stopping.

Missions are where the strategy comes in - each node that you connect goes towards one of your Ironcast's requirements: energy, ammo, coolant, repair. Firing a weapon, activating your shields or speeding up your walk all use coolant and energy, with your weapons using ammo, so if you don't join three or more nodes to get more energy you're pretty much stumped. You have three turns to join as many nodes as possible, but before and after each joining you can fire to hurt the enemy, accelerate up to three times to increase your dodge, power up your shields three levels to decrease damage or repair your subsystems. Plus you can also use any abilities you've unlocked over the course of playing. 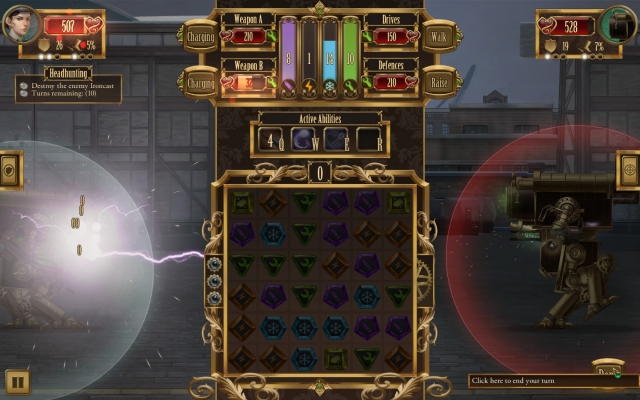 Now, bearing in mind that you only have nine missions until London is destroyed by a giant Ironcast, you might be wondering just how long the game is. That's where the roguelike element comes in - once you die, you gain experience which unlocks abilities/health/various things for subsequent playthroughs. And if you complete the game, it puts more experience in allowing you to eventually replay the game as a powerhouse of disaster!

This does mean that the game gets easier the longer you play, but you also unlock new Ironcast as well as new pilots. So even once you've finished the storyline, you have things to do. Each pilot has a different ability and each Ironcast has different stats, giving you loads of variations to try out to find your best fit.

The mech graphics aren't anything to write home about, but the character portraits are very nice and stylised to look like they belong in the 1800s. The story is told in brief cutscenes of chatter between your commander and the base. There are no voiceovers; each side of the conversation getting either morse code or a typewriter sound behind the subtitles - it’s funny to see these giant war machines that don’t have even a basic radio. The music is made up of some pretty dramatic tunes that are takes on classics like God Save the Queen, and it really suits the tense mood of the game.

Ironcast is an esoteric little package with a lot to offer. The levels vary in difficulty and really do need you to keep your head in the game, despite it looking like a simplistic match-3. I may have said the graphics are nothing special, but they are just window dressing as your attention will usually be in the middle of the screen. Being able to match diagonally, as well as having connector and override nodes are nice additions to the genre and really help with the strategy of it all. If match-3 and strategy are your thing, then this is a perfect game for you. 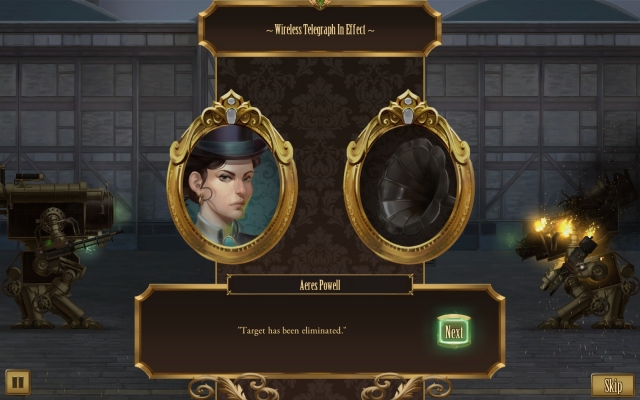 I took far too many screengrabs

Ironcast is an esoteric little package with a lot to offer. The levels vary in difficulty and really do need you to keep your head in the game, despite it looking like a simplistic match-3. If match-3 and strategy are your thing, then this is a perfect game for you.

Steampunk up Your Switch With Ironcast

Ironcast Gets a Publishing Partner